The Yemeni army confirms the response to the attack, and the Houthis announce control of districts in Marib and Shabwa

The Yemeni army announced on Sunday that it had broken new Houthi attempts to storm the fronts in Marib, stressing the continuation of the battles, while the Houthis, for their part, confirmed the completion of their control over several directorates in Shabwa and Marib. 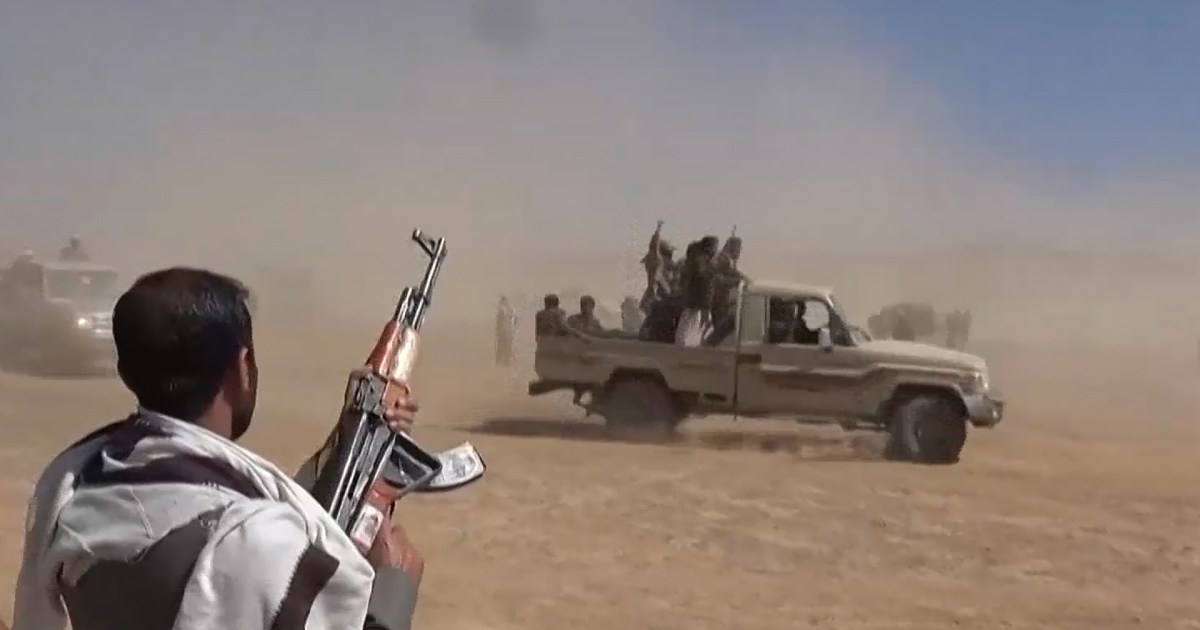 The Yemeni army announced on Sunday that it had broken new Houthi attempts to storm the fronts in Marib, stressing the continuation of the battles, while the Houthis, for their part, confirmed the completion of their control over several directorates in Shabwa and Marib.

"The incursions made by the Houthis on the fronts of Abdiya and Harib in Ma'rib will not continue," Yemeni army spokesman Brigadier General Abdo Majali said.

In an interview with Al-Jazeera, he confirmed that the army had broken the Houthis' attempts to penetrate some of the Ma'rib fronts.

"The battles are continuing," he added.

For his part, the military spokesman for the Houthi group announced the control of the districts of Abdiya and Harib in Marib, eastern Yemen.

And earlier, Yemeni sources said that the militants of the Houthi group had completed control of the entire district of Al-Abdiya, south of the strategic Marib governorate, after a complete siege that lasted for about a month and violent battles with the tribesmen in it.

The sources added that the Houthis are launching a massive arrest campaign in the district, and that several villages are witnessing a large wave of displacement.

Al-Abdiyyah District is located southwest of the city of Ma’rib, and is inhabited by 36,000 people. It acquires strategic importance due to its geographical location, which makes it one of the gates of Ma’rib governorate, as well as its geographical link to the governorates of Al-Bayda and Shabwa from the west and south, through a wide mountain range.

Al-Abdiyyah represented a starting point for the government forces to move towards Al-Bayda governorate to cut the Houthi supply lines towards Shabwa governorate.

After taking control of Abdiya, the Houthis are close to controlling the center of the Juba district, which is about 30 kilometers from the oil-rich city of Ma'rib. The city is the last stronghold of the legitimate government in the north of the country. It is also the stronghold of the National Army and the headquarters of the Ministry of Defense.

For its part, the Saudi-led legitimacy coalition announced the killing of 160 Yemeni rebels in new raids south of the strategic city of Marib.

In a statement, the coalition stated that it had carried out 32 "targeting operations" during the past 24 hours, which led to the destruction of 11 military vehicles and "human losses of more than 160 terrorist elements" in Abdiya, about 100 km south of the city of Marib, which the Houthis have been trying to control for months.

The coalition is trying to prevent the rebels from reaching the city of Marib.

Within a week, the coalition announced that more than 700 insurgents had been killed in the Abdiya district alone.

Marib, which produces oil and gas, is the only governorate that has remained cohesive and has become an incubator for the legitimate government, and controlling it would change the balance of power between the Yemeni army supported by the Saudi-Emirati coalition and the Iranian-backed Houthis.

Marib represents the first threat to the Houthis because of its common border with Sanaa, which is the longest administrative border compared to other governorates.

The road to Shabwa

It is also the first line of defense for the coastal governorates of Shabwa and Hadramout, the source of oil and gas and their export ports, and the international land transportation routes with Saudi Arabia, Oman and Harib in Marib, eastern Yemen.

And today, Sunday, the Houthi group announced control of the districts of Usaylan, Bayhan and Ain in Shabwa.

In a related context, the Coalition to Support Legitimacy in Yemen announced the destruction of two booby-trapped marches launched by the Houthi militia towards the southern region of the Kingdom.

The coalition said in a statement that it takes operational measures to protect civilians and civilian objects from hostile attacks.

The coalition had announced earlier that the Saudi defenses had intercepted and destroyed a booby-trapped drone launched by "the terrorist Houthi militia towards the city of Jazan, southwest of the Kingdom."

It is noteworthy that the Saudi air defenses had intercepted and destroyed many of the booby-trapped marches launched by the Houthis towards the Kingdom during the last period.