Stefano Puzzer leaves the Port Workers Coordination. Last night he announced the end of the blocks and then reversed, apologizing to the dissidents who had contested him 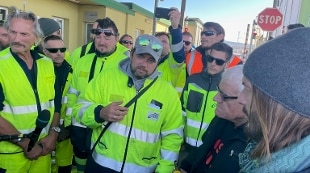 October 17, 2021 Stefano Puzzer resigned from the Trieste Port Coordination. He wrote it on his Facebook profile. "Today I resigned from the Clpt of Trieste because it is right that I assume my responsibilities - it is written in the post - One of these is the decision to continue the presidency until October 20. The decision is mine alone. , it was not forced by anyone, indeed they did not want to accept them but I demanded them ", he concludes.

Previously there had been a turnaround by the Trieste Port Coordination which, after the press release issued in the evening, had returned to its decision by claiming in a short message on the social profiles that "the garrison continues and does not give up".

At Gate 4 of Pier VII the protest of the dockers continued this morning with some hundreds of people present.

The first communiqué announcing the suspension of the block, released around 7 pm, had immediately raised a fuss with the no Green pass as protagonists, angry and disappointed for a protest that on the contrary should have continued at least until 20 October.

Stefano Puzzer, the leader of the Clpt, who was present at the Varco this morning, was immediately targeted.

Then the second statement that specified: "The garrison continues until October 20 and does not give up".

A note from which the phrase "from tomorrow we go back to work" had disappeared.