The government re-proposes the 87 million plan to make Whirlpool a hub for sustainable mobility, but the times are too long for the company that does not accept. 321 layoffs confirmed, Giorgeti: I'll talk about it with Draghi 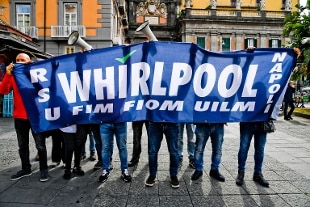 16 October 2021 The negotiating table on the case of Whirlpool Napoli at the Ministry of Economic Development skips once again. At the end of the meeting that lasted all day, there is no agreement between the company, the trade unions, the Government and the Campania Region.

The company has confirmed the expiry of the dismissal procedure for the 321 workers (there were 460 at the start of the procedure, which began on July 15). The letters will start on October 22, the day of the next hearing in the Naples court in relation to the appeal for anti-union behavior promoted by Fim Fiom and Uilm.

"On the part of Whirlpool we have registered an immovable rigidity", said the Minister of Economic Development Giancarlo Giorgetti, who did not hide the "irritation" of the government. Giorgetti guaranteed the executive's commitment to ensure that the consortium project for the reindustrialisation of the Naples site "does not disperse and materializes quickly".

The government had presented, on 23 September, a proposal by Invitalia which provides for the establishment of the consortium for the construction of the sustainable mobility hub, whose industrial plan should be ready for 15 December. The plan envisaged the involvement of 5 companies, plus two others that had expressed interest, for an initial total investment of 87 million. However, according to Whirlpool, the projects presented are still at a very early stage, not compatible with its needs and timing.

Giorgetti has announced that he will discuss the matter with Prime Minister Mario Draghi.

Deputy Minister for Economic Development Alessandra Todde, who chaired the table from the beginning, branded the company's choices as "unreasonable": "we do not understand why it wants to close the procedure today despite the court having expressed itself" with the postponement of the hearing, which in fact suspends the dismissals.

A next meeting has been set for Tuesday.