Here's what it takes to end the Covid-19 pandemic.. How will Germany face the virus this fall?

How is Germany facing the emerging coronavirus, Covid-19, this fall? Did the new wave stop? Is the end of the COVID-19 pandemic imminent? 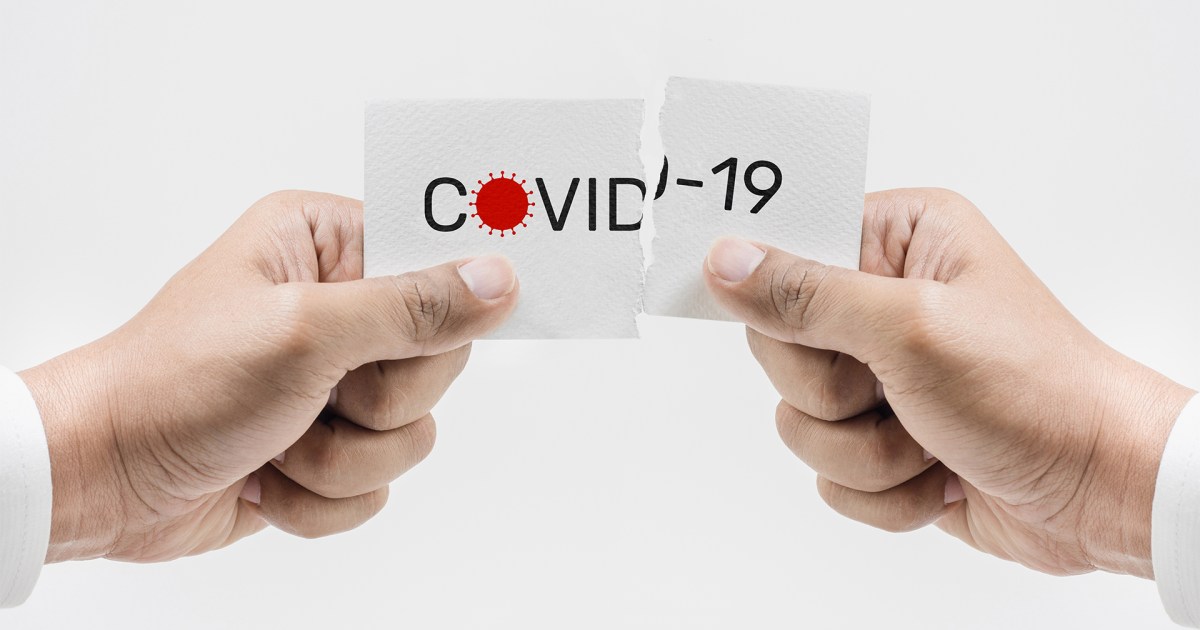 How is Germany facing the emerging corona virus "Covid-19" this fall?

Has the new wave stopped?

Is the end of the pandemic imminent?

Some experts believe that it has "passed the peak" of the Corona pandemic, while others warn of a new wave during the fall and winter.

As for the authorities, they focus on two main groups: school children and the uninitiated.

This is according to a report by Kai Alexander Schulz in Deutsche Welle.

Health Minister Jens Shabban expressed his optimism in a press conference, explaining that the epidemiological situation "we can deal with it well now."

And most Germans seem to think so, too.

A survey conducted by the opinion research institute Infratest Dimap showed that only 42% of Germans are currently concerned about a significant increase in the number of infections, and this percentage was 62% during the summer.

The numbers show that Germany has already managed to slow the fourth wave of corona that appeared this summer.

The number of casualties is also stagnating.

However, it is higher than in the same period in 2020.

This rate is currently about 1.6 hospital admissions per 100,000 people in one week, so everything is fine.

But a look at some percentages also shows that the virus is still active and determines individual fates.

On the Robert Koch Institute's Corona map, more than 40 counties or cities are marked in medium or dark red, which corresponds to an infection rate exceeding one hundred or even two hundred.

In hospitals in the state of North Rhine-Westphalia, the most populous state, about 280 people with corona are currently being treated (as of October 8), half of whom are on artificial respiration.

They are mainly unvaccinated and seriously ill.

“It is very difficult to say where the path of this pandemic, which we assume will last from 2 to 4 years worldwide,” says Beritt Lang of the Helmholtz Center for Infection Research, in an interview with Deutsche Welle. “What we know is that in Germany we do not even have Now there is enough immunity among the population to completely avoid severe infections, which are a burden on hospitals.”

According to official figures, the proportion of fully vaccinated is currently 65%, and among those over the age of 60, who are particularly at risk, the vaccination rate is approximately 85%.

However, the numbers are not completely certain.

The Robert Koch Institute itself suggests that the proportion of grafted people may be 5 percentage points higher.

Apparently, many vaccinations have not been reported by some doctors, and the institute said a review is underway.

Now the cold season begins, and people spend most of their time indoors, and this increases the possibility of infection.

Politicians know this. In addition to the message that the situation is somewhat under control, the health minister immediately sent a warning afterwards, noting that the current vaccination rate would not be enough for a safe autumn and winter, and warning of vanity.

"We must not go too fast (in canceling the measures to contain Corona), but step by step, so that we do not have to go backwards," Shaban added.

What was called in Britain "Freedom Day" (last July 19), in which it was announced the end of all measures to contain Corona, is not on the horizon for Germany at present.

However, epidemiologist Lang believes that this day will not help. "The question, whether one calls for something like this, is political. If one can survive after that, it is an epidemiological issue," she explains.

She points out that when the infection rate rises again, with a heavy burden on the health system, politicians have no choice but to reintroduce protection measures.

Germany's coronavirus policy is currently focused on two groups. Those who suffer from the epidemic almost every day are primarily schoolchildren. Vaccination has not yet been recommended for those under 12 years of age, and this affects about 9 million children in the country. Although most injuries occur in this age group, there were only a few serious cases, doctors say. However, virologist Jana Schroeder warns, in an interview with Deutsche Welle, that children also have to be taken to hospitals because of Corona.

To protect school children, hygiene regulations, tests and quarantine instructions, which vary from state to state and school to school, continue to be applied.

However, the current dispute revolves around the imposition of wearing masks on children in schools.

The Robert Koch Institute supports this move, unlike many pediatricians.

Some states have already removed or restricted the requirement to wear masks or plan to do so.

But there are no federal rules on this, as the school system falls under the jurisdiction of the states.

The other group that the political class focuses on are the unvaccinated.

Although there is no compulsion to vaccinate, the pressure on the unvaccinated is growing.

In many restaurants, hairdressers, barbers or at music events, only those who have tested positive for corona, those who have recovered and those who are vaccinated are allowed in.

The owners of those places can only allow those who are cured and vaccinated to enter.

In another step that should put more pressure on unvaccinated adults, free coronavirus testing has been cancelled.

In Berlin, this step can already be observed, the number of testing centers has already decreased, and from now on it costs about 25 euros (about $ 29) to take the test.

The next tightening relates to quarantine rules.

Until now, workers continue to be paid when they enter quarantine.

But from November this will no longer be available to unvaccinated people.

Lang says that focusing on these two groups now, especially on unvaccinated adults who are at higher risk of severe disease, makes a lot of sense from an epidemiological point of view.

"We have to see if that works," she says.

What is missing, however, is a more accurate knowledge of "which populations have not yet been vaccinated, in terms of where (they live) and other characteristics (of those groups) as well as knowledge of the specific measures that can be used," Lang says.

"Now you have to carry out a home vaccination campaign - so to speak - everywhere, and address the (unvaccinated) people specifically, it is easy for them to accept offers of vaccination," she adds.

Here's what it takes to end the pandemic

Wayne, a writer in the Washington Post (Washington Post), says that the end of the Corona pandemic may be imminent, given that the increase in the Delta strain is declining, and new cases have fallen by more than a third since the first of last September.

And she adds - in an article to the newspaper - that the opportunity to return to normalcy, although it is not guaranteed, is within reach.

It lists some conditions for putting this public health crisis behind us.

It explains that this requires, in the first place, the acceptance that the "Covid-19" pandemic remains for the foreseeable future, and that the "Zero Covid" policy will not succeed.

Even New Zealand, which until recently implemented a complete lockdown of the country for one case, has admitted this.

Wen adds that we must acknowledge two facts: First, we are unlikely to see the virus suddenly become less lethal, because new mutations can lead to more infectious and more virulent variants.

Even worse, such variants escape the protection of existing vaccines.

Second, while we must continue to try to achieve population immunity through mass vaccination, we likely won't be able to suppress infection to very low levels any time soon.

She added that the good thing, despite these facts, is that it is possible to transform "Covid-19" from an existential crisis into a problem that can be controlled through 3 main actions.

, vaccinations must be provided to younger children.

It is true that young people who get the disease tend not to get infected like adults, hundreds of children have died from “Covid-19” (more than 1 in 4 new infections were in children).

And while children are being vaccinated with a vaccine that greatly reduces the likelihood of them developing serious illnesses, parents should be warned as if they were not immunized.

, there is a need for outpatient oral treatment of COVID-19. That too looms in the not-too-distant future. Merck has just announced notable results for an antiviral tablet called molnupiravir that it says can reduce hospitalization or death by about 50%, taken by mouth twice daily for 5 days. It is much more convenient than the current treatment of early monoclonal antibodies for "Covid-19", which requires a specialized treatment center for intravenous injection or a series of injections.

To be clear, antiviral pills will not be a cure for COVID-19.

It is clearly much better to be vaccinated, and not contract the virus, in the first place.

However, about 70 million Americans have so far chosen not to be vaccinated.

If taking the mentioned pills means that the injured will need a hospital bed in half, it could help relieve pressure on the health care system and save countless lives.

Ideally, researchers would also study this oral treatment to see if it works to prevent a person at high risk of contracting the virus, as the flu drug Tamiflu does.

In addition to Merck, several other drug companies, including Roche and Pfizer, have oral antivirals in late-stage clinical trials.

This means that within a few months, the combination of vaccination and early treatment could make the epidemic more like a mild flu than a potential death sentence.

, it must provide free and readily available quick tests.

Antiviral therapies and antibody injections only stave off severe disease when taken early in the illness.

This means that the infection must be detected as soon as possible.

Moreover, about half of all cases of corona transmission come from asymptomatic people.

Therefore, virus control requires identification of these individuals before transmission occurs, which also depends on testing.

However, despite widespread recognition of the importance of prompt diagnosis and early detection, testing remains a largely untapped infection control strategy in America. In this regard, the writer says that Americans lag behind other countries. Britain has made free tests available to all its residents so that everyone can be tested twice a week. Canada offers free express tests for companies. Singapore and Japan carry out the tests for a nominal amount through vending machines located everywhere.

The United States can do that, too.

If every family were given home tests twice a week before the kids went to school and parents went to work, and if it had become the norm for friends and family to take quick tests before getting together for weddings, birthday parties, even casual dinners and happy hours, along with Vaccine requirements, then regular testing could replace the need to hide and distance in schools, offices and social spaces.

Finally, the writer expressed her belief that the United States has already gone through the darkest days of the epidemic, and the virus may be here to stay, but if people are armed with the right tools, the epidemic will not return to controlling their lives.