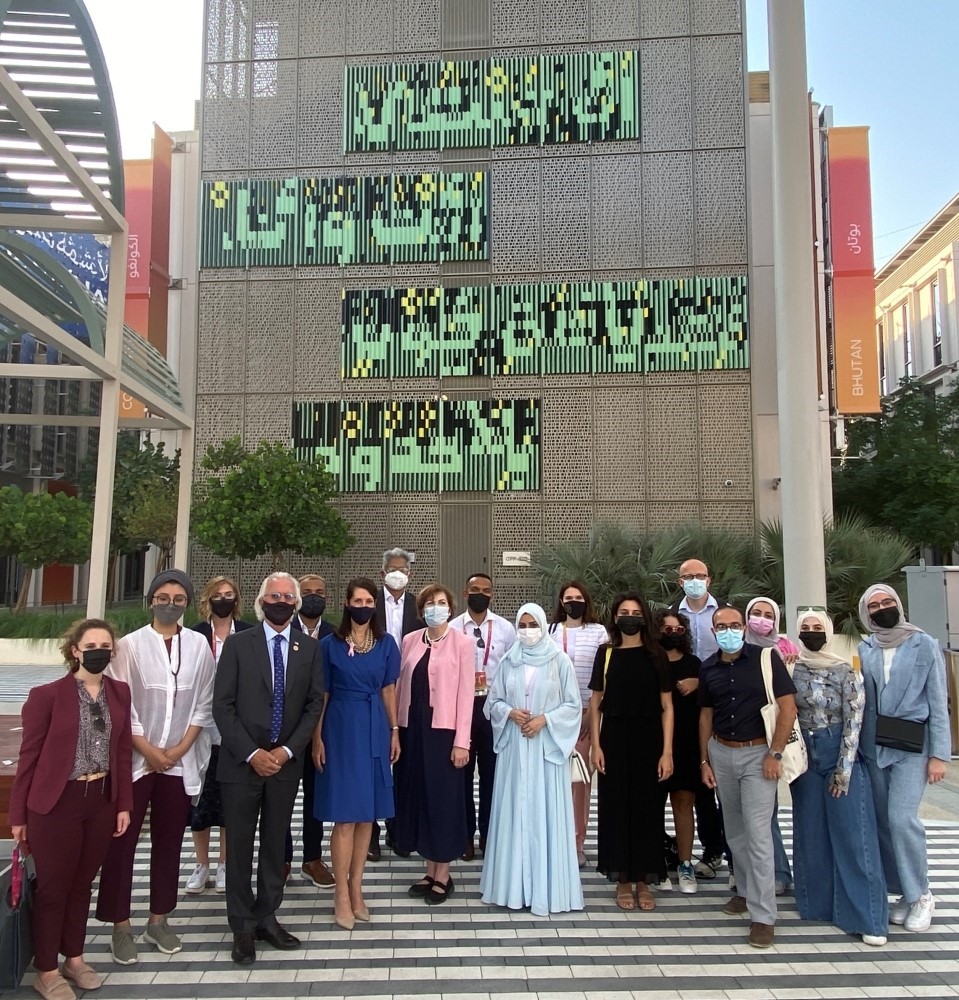 The curtain was officially unveiled at Expo 2020 Dubai on a giant mural of 125 square meters and weighing about 500 kilograms created by experienced designers from the UAE and the United States of America as part of a collaborative project between the American University of Sharjah and the United States Mission to the country.

The mural combines Arabic and English typography and bears the phrase “You and I seek to shape a world without limits,” written by the Emirati writer, an American graduate of Sharjah, Iman Al-Yousef.

The mural-making process was supervised by faculty members Reem Ibrahim and Hala Al-Ani, architects Bishoy Gerges and Polish designer Marian Misiak who led the project as co-designers, mentors and coordinators of the 60-hour manufacturing and construction process in Al Dhaid, Sharjah.

The mural consists of 25 panels of galvanized iron made from local sources, each panel weighing 20 kilograms, mounted on a supporting frame.

The “Big Letters” mural, located in the Opportunity District of Expo 2020 Dubai, celebrates the principles of diversity, unity, coexistence, tolerance and unlimited opportunities shared by the United Arab Emirates and the United States.

Consul General Grigounis said, "The US mission to the UAE is proud to support the mural project for the American University of Sharjah at Expo 2020 Dubai, which promotes the slogan of the US pavilion "Life, Freedom, and the Pursuit of the Future." The project also embodies the US mission's commitment to partnering with the best institutions Education in the UAE to encourage innovation, cooperation and exchange between the United States and the UAE.

Dr. Susan Mam said that participating in a project of this size in a major global event such as Expo 2020 Dubai is an important achievement for the university community and we are grateful to the United States Mission to the country for supporting the vision of our team from the beginning of the business idea to its end and for allowing the American University of Sharjah to showcase the skills of its students and graduates And its faculty members to the world in this way.

Reem Ibrahim, an assistant professor of visual communication at the university, in her capacity as the project leader, said that the biggest challenge was taking a two-dimensional text and translating it into a three-dimensional viewing experience in a way that unifies the audience of both Arabic and English.

“The text refers to the ambitious views of both the UAE and the United States in order to achieve a future that goes beyond our imagination. The lenticular effect beautifully embodies this ambition and provides a unique and dynamic viewing experience as the shape of the artwork changes according to the angle from which the viewer looks at it until it is able to read the phrase Fully, clearly and in both languages ​​at the same time.