Ballot in Rome, the seat of the committee for Michetti Mayor vandalized 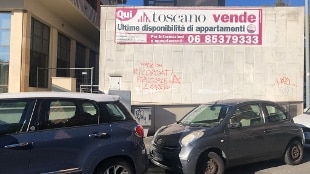 October 15, 2021 "Fascista", "Remember piazzale Loreto", are the writings that during the night appeared outside the headquarters of the electoral committee for Michetti mayor in via Antonio Malfante, in Piazza Navigatori in the area of ​​via Cristoforo Colombo.

"My electoral committee has been desecrated. They wrote fascist Michetti. But I only had the DC card. And I have always been inspired by the degasperian ideals. You don't win like this, you don't govern like that. so low to 'kill' a person "commented the mayoral candidate Michetti. "Five-pointed stars of the Red Brigades and death threats against me. I am baffled. Our committee has been desecrated and vandalized with the five-pointed stars of the Red Brigades, fascist Michetti and references to Piazzale Loreto" he wrote in a note "This is the result - he explains - of the climate of hatred that has been created around me and all the center-right and that has been fueled in all these months of electoral campaign by the left. Now enough,I will no longer accept attacks that have even led to these intimidations and threats that offend my person and endanger democracy. This is a shame ", he concludes

The solidarity of the other candidate in the Rome ballot Roberto Gualtieri was immediate: "Writing with insults against Michetti is a deplorable thing. We must always respect people. There is fair competition with him, with differences in values. there are members of CasaPound on his lists but I have never allowed myself to insult him. My solidarity goes to him ".