The death toll from the Beirut protests has risen to 6

Six people were killed and at least thirty wounded today, Thursday, as a result of shooting during a demonstration against the judicial investigator in the Beirut port explosion case, in an escalation that threatens to plunge the country into a new crisis. 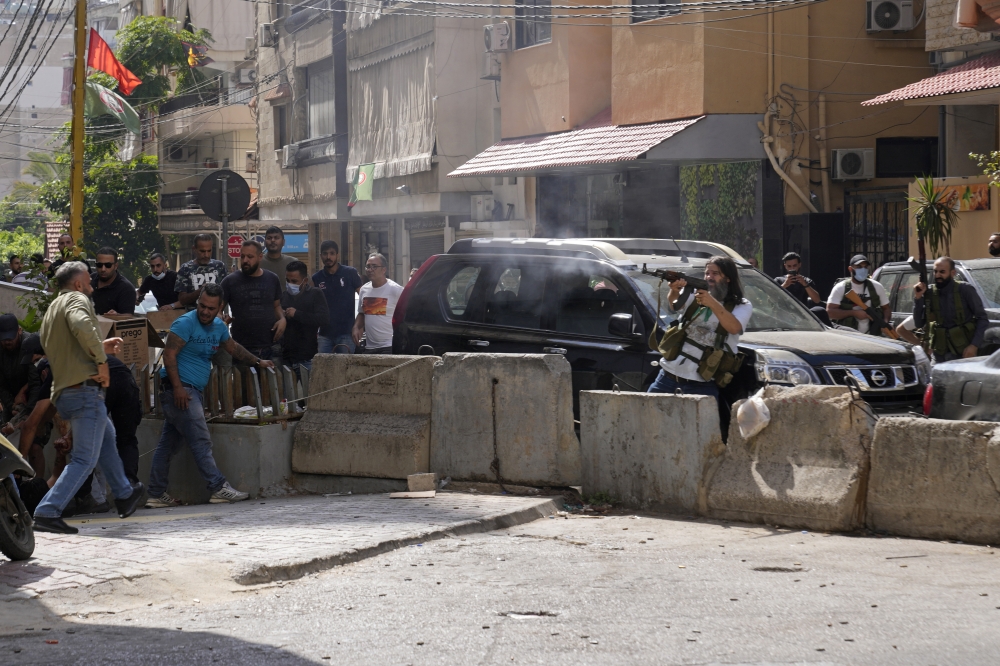 The death toll from the Beirut protests has risen to 6

Six people were killed and at least thirty wounded today, Thursday, as a result of shooting during a demonstration against the judicial investigator in the Beirut port explosion case, in an escalation that threatens to plunge the country into a new crisis.

In recent days, Judge Tariq Bitar has been subjected to a campaign of pressure led by Hezbollah, to object to his summoning of former ministers and security personnel for questioning as part of the investigations he is conducting, punctuated by calls for his removal.

Al-Tayouneh roundabout, tens of meters from the Palace of Justice, where Bitar's office is, turned into a war zone that witnessed heavy shooting and heavy shells and the spread of snipers on the roofs of buildings, despite the presence of army units and their implementation of rapid deployment in the area, which is one of the former lines of contact during the civil war (1975-1990).

The shooting began suddenly as dozens of protesters, supporters of Hezbollah and the Amal movement, gathered in front of the Palace of Justice.

The Minister of Interior, Bassam Mawlawi, announced during a press conference information about the killing of six people, while the Lebanese Red Cross spoke of five deaths and 30 injuries.

Mariam Hassan, the director of emergency at Al-Sahel Hospital in the southern suburbs of Beirut, said that three dead people arrived at the hospital, including a 24-year-old woman who was shot in the head while she was at her home.

AFP reporters in the area heard heavy gunfire and shelling.

An AFP photographer saw gunmen belonging to the Amal movement shooting in the streets.

Users of social networking sites circulated pictures of students sheltering in a classroom in a nearby school, which AFP could not verify.

Under the fire, several citizens, including children, carrying as many necessities as possible, left their homes in the Tayouneh area, which is crowded with residential buildings.

The Lebanese army announced that "while protesters headed to the Adliya area, they were exposed to bursts of fire in the Tayouneh area - Badaro, and the army rushed to cordon off the area and spread to its neighborhoods."

The army did not specify the identity of the parties that started the shooting.

The army warned that its units "will shoot at any gunman who is on the roads and at anyone who shoots."

He appealed to civilians to evacuate the streets.

Prime Minister Najib Mikati called for "calm and not to be drawn into sedition," and made several contacts with the army and officials, including the leader of the Amal movement, Parliament Speaker Nabih Berri.

Many fear that pressure will lead to the removal of Bitar, similar to his predecessor, Fadi Sawan, who was removed in February after accusing political officials.

Since his claim against former Prime Minister Hassan Diab and his request to prosecute deputies, former ministers and security, four concerned ministers have submitted complaints before multiple courts demanding that the case be transferred from Bitar's hand, forcing him to suspend the investigation into the case twice so far.

On Tuesday, Bitar suspended the investigation pending a ruling on a lawsuit filed before the Civil Court of Cassation by the current deputies, former Finance Minister Ali Hassan Khalil and former Minister of Works Ghazi Zuaiter, who belong to the Amal Movement bloc.

Following the decision, Bitar can resume his investigations.

He is supposed to set interrogation dates for both Zuaiter and former Interior Minister Nouhad al-Machnouk, after he had to cancel their two interrogation sessions this week following the suspension of the investigation.