34 minutes of horror - this Norwegian archery attack is now known

Police said a police officer who was free was wounded in the attack. The wounded are in intensive care, but they are not known to be in danger of death. 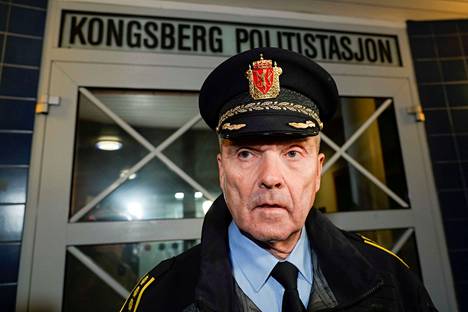 In Kongsberg, Norway, at least five people have been killed and two wounded in an attack by a bow gunman on Wednesday night, Norwegian police say.

The suspect in the act has been arrested and is believed to have acted alone.

The attack launched a large-scale operation involving, in addition to the police, a bomb squad, a contingency force and first aid.

The man suspected of the attack is a 37-year-old Danish citizen who has lived in the locality.

The police told about the matter in a press release issued at the beginning of the night in Finnish time.

Authorities were initially silent about the suspect, but said they ended up publishing the bulletin, as there have been many rumors circulating about the matter on social media.

According to the Danish news agency Ritzau, the man is accused of killing at least five people.

Police Chief Øyvind Aas said the possible terrorist motive for the act is naturally being investigated.

Police Chief Øyvind Aas said at a news conference that a police officer on leave was wounded in the attack.

According to the donkey, the wounded are in intensive care.

He had not been informed that these were life-threatening.

Police have not provided more detailed information on, among other things, the age or gender of the wounded.

According to the donkey, the dead in the attack have connections to the area where the bloodshed took place.

- I cannot answer whether there is any relationship between the perpetrator and the victims, Aas said, but said that the matter should be clarified.

Aas said the possible terrorist motive for the act is being investigated.

He said the suspect had not yet been heard in the evening.

The attacks took place in Kongsberg, with less than 30,000 inhabitants, located 68 kilometers southwest of the capital Oslo.

The areas have been isolated and forensic investigations have been carried out.

The first reports came to the police at 18.13 local time.

The suspected factor was caught at 6:47 p.m.

According to Norwegian media, the suspect moved over a wide area and was not under police control at all times.

The attacks launched a giant operation in Norway.

The student, who spoke to VG magazine, lives just twenty meters from the Coop store where one of the attacks took place.

- I sat and looked at Squid Game when I saw and suddenly heard the sirens.

I thought the sounds came from a TV series, he said.

- Suddenly I heard the police shout hellishly, “Lower your gun!” He described.

He said there were several police cars on the scene and the police were heavily armed.

He said police had knocked on windows and banned people from leaving the apartments.

Magnus Tangen was on his way to the Coop store when he heard a helicopter above him.

When he arrived at the scene, police and an ambulance were already present, and there were plenty of blue lights.

- There was so much blue light that it was difficult to see the number of police cars, he told VG.

The picture shows an arrow standing on the wall.

A third eyewitness told Laagendaasposten that he saw the suspect running on Hyttegatan.

Police said he had run after the suspect.

- The police shot at him, I think with an mp5 or submachine gun, he described.

A representative of the grocery chain Coop has confirmed to VG that there was a “serious case” in the chain’s store.

According to a chain spokesman, none of their employees were injured.

According to the police chief, the suspected man used a bow and arrows in the attack.

However, Aas did not comment on allegations that the man had also used a knife.

Soon after the attack, images of an arrow that had stood up on the wooden wall of the building spread to the world.

The nearby Drammen Hospital was put on standby because of the incident.

More staff were also invited to the scene.

- The news about Kongsberg is appalling, Norwegian Prime Minister Erna Solberg said according to the news agency Reuters.

- I understand that many people are scared, but it is important to emphasize that the situation is now in the hands of the police.

As a result of the incidents, the Norwegian Police Board ordered police officers to be armed nationwide.

The order was intended to increase the readiness and ability of the police to react, but it was a precautionary measure.

- The police have no concrete evidence that the threat level in the country has changed, the release said.

Police plan to report the incidents next Thursday morning.