First Observation | Why the Earth Life Community has become the "topic" of the UN forum   On October 12, 2021, President Xi Jinping attended the 15th Summit of the Conference of the Parties of the Convention on Biological Diversity via video and delivered a keynote speech entitled "Together to Build a Community of Life on Earth". He pointed out that the international community should strengthen 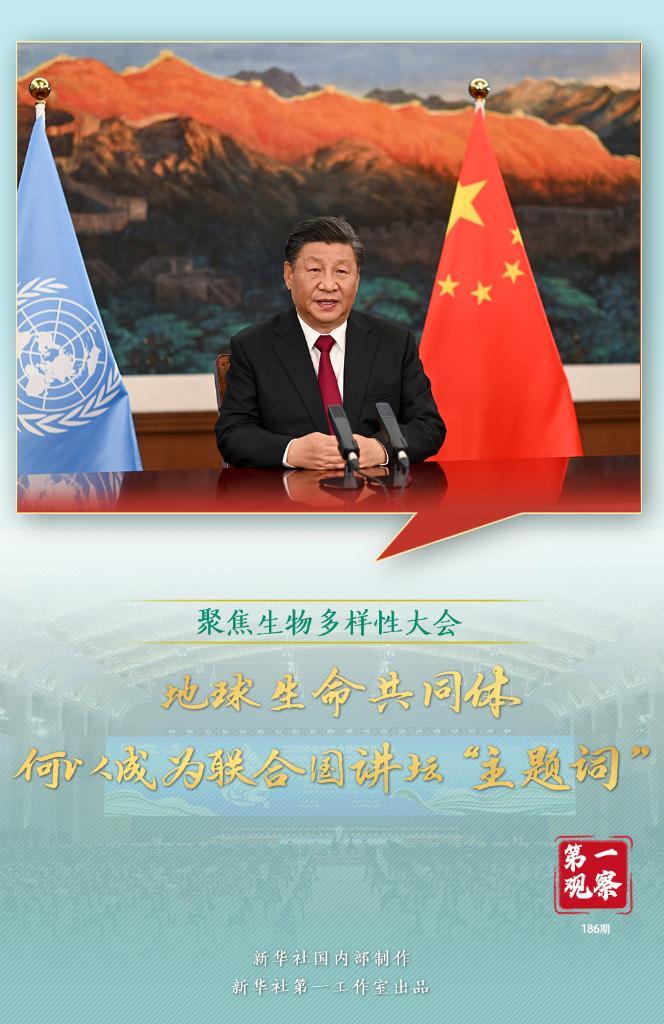 On October 12, 2021, President Xi Jinping attended the 15th Summit of the Conference of the Parties of the Convention on Biological Diversity via video and delivered a keynote speech entitled "Together to Build a Community of Life on Earth".

He pointed out that the international community should strengthen cooperation, think in one heart, and act hard to build a community of life on earth.

In the past year, in the forum of the United Nations, President Xi Jinping has repeatedly emphasized the building of a community of human and natural life and a community of life on earth, which has become the deafening "Voice of China" and has been widely recognized by the international community.

The world at the crossroads: what to expect from road signs

In this keynote speech by President Xi Jinping, “Community of Life on Earth” was mentioned three times and “Home on Earth” four times.

I have heard from time to time, and I have responded to it.

The world is at a crossroads.

The fifth edition of the Global Biodiversity Outlook issued by the secretariat of the United Nations Convention on Biological Diversity pointed out that biodiversity is being lost at an unprecedented rate, and various pressures for its reduction are increasing.

In the face of mankind’s worries about homeland on the earth, President Xi Jinping drew a plan for China in the United Nations forum.

On September 30, 2020, President Xi Jinping pointed out at the United Nations Biodiversity Summit that man and nature are a community with a shared future.

We must work together and act quickly to protect in development, develop in protection, and build a beautiful home in harmony with all things.

On September 21, 2021, President Xi Jinping attended the General Debate of the 76th UN General Assembly in Beijing by video and delivered an important speech pointing out that he should improve global environmental governance, actively respond to climate change, and build a community of human and natural life.

The Voice of China comes from the heart and reaches the hearts of the people.

To protect the earth’s homeland, we must improve global governance, practice true multilateralism, strengthen the role of the United Nations, and build a common future for present and future generations.

At present, the new crown pneumonia epidemic is still raging around the world, and human society has been profoundly changed.

The world has entered a new period of turbulent change.

President Xi Jinping emphasized: We must strengthen unity and overcome difficulties together, so that development results and good ecology will benefit people of all countries more and more equitably, and build a home for the common development of all countries in the world.

Both humans and green hills live up to it: make good use of the golden key to open up the high-quality development of mankind

In his speech on the 12th, President Xi Jinping made a four-point proposal. The first is: to coordinate the relationship between man and nature, guided by the construction of ecological civilization.

We must resolve the contradictions brought about by industrial civilization, limit human activities to the limit that the ecological environment can withstand, and carry out integrated protection and systematic management of mountains, rivers, forests, fields, lakes, and sands.

Dialectical reflection on industrial civilization is a major contemporary proposition.

In the past, industrial civilization often paid more attention to development, ignoring the bearing capacity of natural ecology.

Engels said: "Don't be overly intoxicated by our human victory over nature. For every such victory, nature retaliates against us."

On September 30, 2020, President Xi Jinping emphasized at the United Nations Biodiversity Summit that industrial civilization has created huge material wealth, but it has also brought about an ecological crisis of biodiversity loss and environmental destruction.

Ecological civilization is a major achievement of the progress of human society.

“When mankind protects nature in a friendly manner, nature’s rewards are generous; when mankind rudely plunders nature, nature’s punishment is also ruthless.” President Xi Jinping at the 15th Conference of Parties Leaders Summit of the Convention on Biological Diversity This statement was highly recognized by the participants.

In today's world, facing the dual tasks of restoring the economy and protecting the environment, transforming ecological advantages into development advantages will bring huge benefits to green waters and green mountains, which can promote a win-win situation for economic development and environmental protection.

A good ecological environment is not only natural wealth, but also economic wealth.

These scientific conclusions are all major developments in the theory of productive forces.

Knowing and Acting: Co-building a community of life calls for common action

This is the scenery of Nianbao Yuze in Jiuzhi County, Guoluo Tibetan Autonomous Prefecture, Qinghai Province, the core area of ​​the Sanjiangyuan National Park (photographed on July 9, 2019).

On the 12th, President Xi Jinping announced in his keynote speech: China will take the lead in investing 1.5 billion yuan to establish the Kunming Biodiversity Fund to support biodiversity conservation in developing countries; China has officially established the Three Rivers Source, Giant Pandas, Siberian Tigers and Leopards, The first batch of national parks such as Hainan Tropical Rainforest and Wuyi Mountain; vigorously develop renewable energy, and accelerate the planning and construction of large-scale wind power photovoltaic base projects in deserts, Gobi and desert areas. The first phase of the project with an installed capacity of about 100 million kilowatts has been in order recently Start of construction... This series of major measures has been resonated by all parties.

Most of the countries with the richest biodiversity in the world are developing countries. It has always been China's firm position to place development issues in a prominent position in the global macro framework and pay more attention to the promotion and protection of the right to subsistence and development.

How to promote the protection of biodiversity to further reduce poverty while protecting the ecological environment is an important topic of the 15th Conference of the Parties to the Convention on Biological Diversity.

China’s experience shows that by combining poverty alleviation and development with ecological construction, green water and green mountains have been exchanged for gold and silver mountains.

"We must be concerned about the people's yearning for a better life, and achieve a multi-faceted win-win situation such as protecting the environment, developing the economy, creating jobs, and eliminating poverty, and enhance the sense of gain, happiness, and security of the people of all countries." President Xi Jinping said.

This is full of natural feelings, but also full of world feelings.

"Green water and green mountains are golden mountains and silver mountains" has been translated into many languages. This simple and vivid discourse has become the subject of building a community of life on earth.