Assignment review can reveal that an exclusive store for clothes and bags in Gothenburg is part of a network of mailbox companies in tax havens. At the top of the network is a notorious businessman who is suspected of tax crimes equivalent to over half a billion kronor - and has connections to an Italian terrorist group. But the auditor in charge in Sweden has approved the company for almost 20 years. 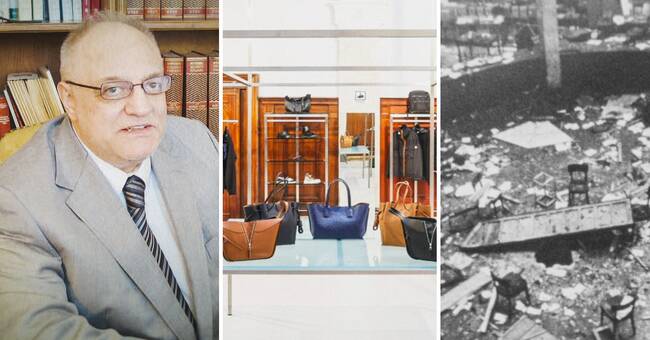 On the surface, Mullbeck AB is an ordinary Swedish limited company that imports and exports luxury bags and clothes.

In central Gothenburg is its exclusive store ABCD.

But Assignment review can, through documents from Pandoraläckan, reveal that the company is part of a complicated structure of anonymous companies in tax havens.

At the top is the businessman Delfo Zorzi, with a past in the Italian terrorist group Ordine Nuovo.

- The group is behind some of the biggest bombings in Italy.

One can draw a thin line that connects Ordine Nuovo with other neo-fascist groups, says the Italian historian and author Benedetta Tobagi.

In 1969, Ordine Nuovo carried out the first in a series of violent acts, a bombing raid on Piazza Fontana in Milan, in which 17 people died and 88 were injured.

Several members of the terrorist group were arrested, but Delfo Zorzi went to Japan - where he has long had his base as a businessman.

In the early 2000s, Delfo Zorzi was sentenced in his absence to life in prison for the bombing, but was later acquitted by the Supreme Court, which ruled that there was insufficient evidence.

At the same time, he is linked to other terrorist attacks without casualties, including a bomb that never exploded at a school.

Italian authorities have also investigated both Delfo Zorzi and the Swedish company Mullbeck for tax offenses in Italy, corresponding to over half a billion kronor.

An unknown amount of money has gone from Delfo Zorzi to the Italian judiciary in a settlement.

Neither Delfo Zorzi nor the Swedish management in Mullbeck wanted to comment on the information.

"Not a customer we want"

Both the information about the suspected tax crime and the links to the terrorist group Ordine Nuovo can be searched online.

But the Swedish auditor who has supervised the company has approved the company's actions for almost 20 years.

- We will look at this and make an investigation to understand how it is possible, because this is not a customer we want.

But now we have to understand what it is that makes us end up here, says Annie Sebelius, communications manager at the auditing firm Grant Thornton, where the auditor works.

Much of this information is available to the public, if you google the company a lot of this will come out - it's a push of a button away?

- We are aware of that, so is the auditor.

We have only known about this for a few days, so we do not know if it is the company's routines that are too blunt or the auditor's assessments that have failed.

Grant Thornton begins by investigating the current case, but does not rule out that more customers need to be examined.

- We have 25,000 customers so I must probably be realistic and say that there may be more examples, says Annie Sebelius.