Online schooling, the only hope and ordeal of a young Afghan girl

School was once the joy of this young Afghan girl. But the Taliban in power having refused to open secondary education to girls, this high school student is getting down to taking online courses. A C… 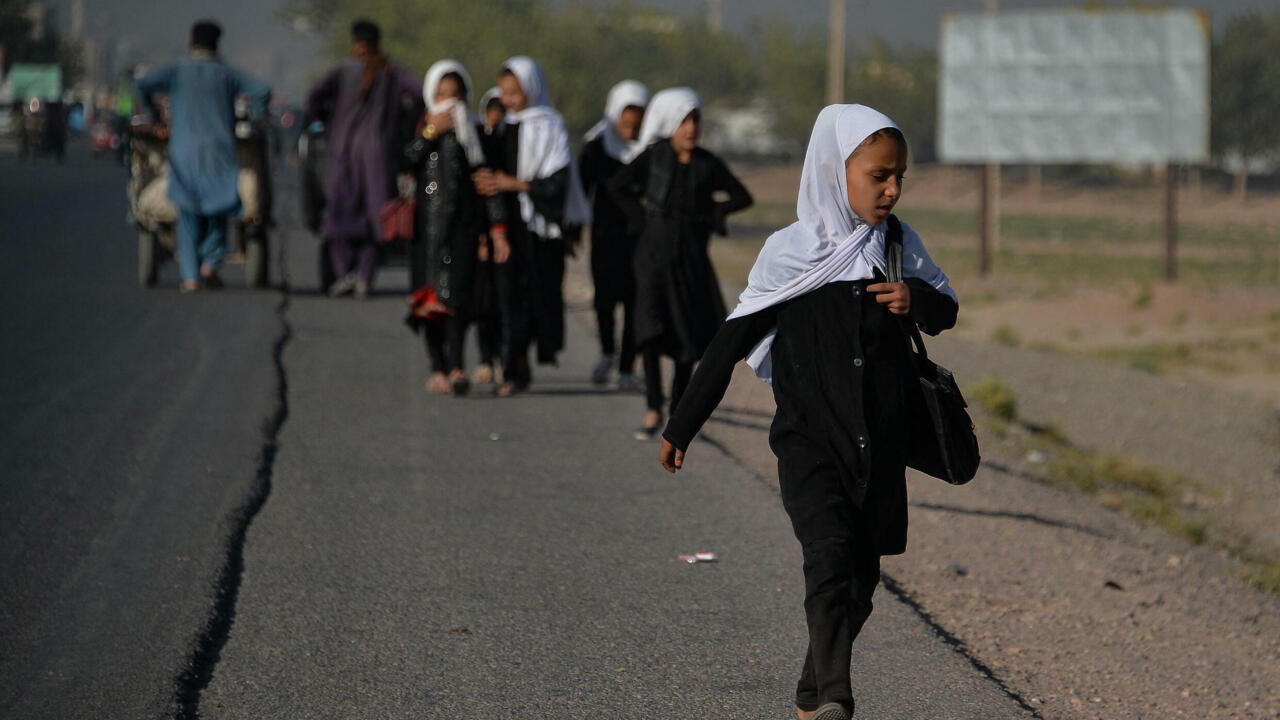 Back to school time has come.

Rabia H * sees her little brother heading to school for the first time, Saturday, September 18, since the Taliban returned to Kabul in the height of summer.

It's a painful morning for this Afghan teenager.

The new masters of Afghanistan took over the reins of the country a month ago.

Yet those few weeks were the most difficult this 15-year-old high school student has ever experienced.

Essentially Shiite, this community was brutally persecuted by the Taliban in the 1990s. As the last American soldiers left Afghan soil on August 31, a painful decision was imposed on them: flee as soon as possible.

A few days later, he took refuge in neighboring Pakistan.

Until the "last minute" of the deadline for the American withdrawal, the family hoped to be evacuated via Kabul airport, explains Rabia from the Afghan capital, during a telephone interview with France 24. This is not never happened.

And, the road to the Pakistani border being too dangerous for a woman and children, Rabia's father had to resolve to leave his family in Afghanistan.

Before kissing his daughter, the man pulled Rabia aside to talk to her.

"He reminded me that I was the eldest, that I had to help with my siblings, especially my brother, my one year younger. He is in fourth grade and is not applied. I have one. great responsibility ".

As far back as she can remember, Rabia has always been top of her class, filling her father with deep pride.

But for her, as for other schoolgirls in the country, the Taliban have a very different purpose.

Before they re-seized Afghanistan in August, the fundamentalist Islamist group had promised American negotiators for years to have a facelift: the coming era would not be a repeat of their disastrous rule. 90s

But when schools across the country reopened on September 18, following a closure linked to the Covid-19 pandemic, schools for high school girls remained empty, effectively depriving those aged 13 to 18 of all teaching.

That is why, for Rabia, the joy of this return is tarnished by bitterness.

“I was genuinely happy for my brothers because they could go to school. They could meet their teachers and classmates, and also, they could get an education,” she explains.

"We thought schools would reopen for everyone. But when we realized that it was not about girls, we felt a kind of desperation."

But in the face of adversity and determined to continue her education, Rabia turned to the internet, embarking on an online education program, without any help.

Today, the Taliban are driven by one ambition: to gain international recognition, and financial support.

A question of survival for the country facing an unprecedented economic crisis.

We see the Taliban granting visas and interviews to foreign journalists, while brutally repressing those from their own country, according to the UN.

“The Taliban treat women like animals. They don't allow us to live, to go to school, they don't even want to talk to women. If we protest, they'll chase us like beasts. please, do not recognize their government ", begs Rabia

Access to education may be a fundamental right, but it is first and foremost a way of the cross for Rabia.

Since the Taliban came to power, his life has been confined to the walls of the family apartment, with only one gateway to the outside world: the Internet.

But this area of ​​freedom is itself hampered by perpetual power cuts. "In the morning, or generally at night, we have a little electricity, but never in the afternoon", sums up the young girl, whose life is thus punctuated by these hazards. Rabia studies alone in the morning, during the few hours of Internet access. Then, in the afternoon, two teenage girls from her neighborhood come to study with her the courses she has received online in the morning. When the evening came, the Internet returned, she devoted herself to learning English with her brother.

The courses taught on the Web, in fact, are mainly in English, and never in Persian, the language she used to use in school.

The teenager, who would have been in second class this year, must therefore now learn in a new language.

"It's very hard, we have no teacher to guide us. I asked people to help me, many refused, others did not even respond," she sighs.

Rabia's family and friends are all in shock.

Also, it is difficult for them to help the adolescent, while they themselves laboriously manage to cope with the situation.

Like his father, who struggles to survive, deprived of a job and without money in Pakistan.

Rabia prefers not to disturb him.

Before the Taliban takeover, Rabia was destined for higher education, under other skies.

"I wanted to get a scholarship in a reputable foreign university. I wanted to be a scientist, and I wanted with all my heart to enroll in a university where I could become the person I want to be," she recalls.

This dream faded with the Taliban, but it never ended: Rabia gets down to preparing for the Scholastic Aptitude Test (SAT).

This exam (measuring verbal skills and mathematical reasoning) is a prerequisite for admission to an American university.

The young girl does not yet know the conditions under which she will be able to take this test, but she is preparing for it: she assiduously follows courses on Khan Academy, a free online teaching site, founded by the famous American educator Salman ( Sal) Khan.

"It's great, I love it", raptures Rabia.

Her voice, for once, vibrates with adolescent enthusiasm.

"It's a program that's accessible to me, and they have materials, videos for all skill levels."

But if the Khan Academy now has platforms in many languages, Persian is hardly one of them.

An ordeal for Rabia: "I asked students from the American University of Afghanistan to give me a helping hand," she says.

"But they were busy, and refused to lend me a hand."

“That day, my heart was broken,” Rabia concluded.

I feel more lonely every day.

My father is gone.

I miss him too much… I can't even explain how I feel. ”Her voice died away, as if overwhelmed with emotion.

After a few moments, however, the young girl pulls herself together - as she has done so often lately - and continues: “I tell myself that I have to stay strong - for my father, my family. For the Afghan women. let's not talk, the Taliban will do whatever they can… And we can't let that happen. "

Translated from English by Sophian Aubin