Green pass, tension between the dockers: risk of blocking in Trieste and Genoa

The Trieste Workers' Committee: "From 15 October, if the obligation of the Green Pass in the workplace is not withdrawn, the activities of the port of Trieste will be blocked". Not only for port workers "but for all categories of workers". The Viminale circular: "Provide free molecular or rapid antigenic tests to personnel without Green Pass"&nbsp; 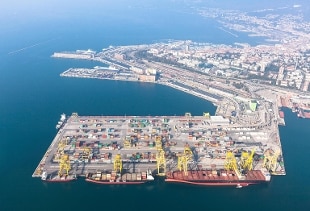 13 October 2021 Ports cannot be stopped and to avoid the risk of compromising operations in the case of a high number of employees without a Green pass, the Interior Ministry recommended in a circular letter to companies in the sector "to make available personnel without Free rapid molecular or antigenic green pass tests "specifying that economic operators" will be able to evaluate, in full autonomy, every possible organizational modality for the purpose of acquiring the Green pass by employees without ".

But the controversy breaks out. And if the companies operating in the port of Trieste - where the share of workers without a Green pass is high, 40% according to the data - said they were willing to pay the workers tampons until next December 31, "provided that from October 16, however, resume activity ", the

: "From 15 October, if the obligation of the Green Pass in the workplace is not withdrawn, the activities of the port of Trieste will be blocked". And they add: "We have learned that the government is trying to find an agreement, a sort of accommodation regarding the port of Trieste, and that President Zeno D'Agostino is fearful of his resignation. We as dockers strongly reiterate and we want the message to be clear that none of this will cause us to come to terms until the obligation of the Green pass to work is lifted, not only for port workers but for all categories of workers ".

"Since for me the management of the Port is done starting from a support from below, God forbid I would support an initiative to block the activities. I'm sorry, but I'm not there anymore". The president of the Port Authority of the Eastern Adriatic Sea, Zeno D'Agostino, declared to Il Piccolo, announcing his intention to resign if on Friday the dockers confirm the block to the activities that threaten. "On Friday - said D'Agostino - I don't think there will be any news, at the moment I don't see solutions". The president said that "I care too much for the support of workers not to understand that there is no longer a communion of intentions and vision between what I think and what they think".

the confederal unions contest the circular of the Interior Ministry

and take the opportunity to ask for the recommendation to be extended "to all transport sectors of ancillary services and related accessories", write the general secretaries Filt Cgil, Stefano Malorgio, Fit Cisl Salvatore Pellecchia and Uiltrasporti, Claudio Tarlazzi in a letter sent to Ministry of the Interior and the Ministry of Transport and Sustainable Infrastructures. "On several occasions we have represented at MIMS - explain the three union leaders - the peculiarities of the essential public services sector and in particular of the transport sector and the need to guarantee as much as possible a continuity of the transport service for people and goods that do not impact on the fundamental rights of user citizens ".

where a meeting was called in the prefecture between the trade unions and the companies of the port.

The personnel without vaccine inside the port of Genoa - explains Duilio Falvo, port sector secretary for Uiltrasporti Genoa - is estimated at around 20%, a figure that translated in terms of defections could greatly affect the operations in port and have repercussions also on logistics and direct activities on ships ".

On the table the request to companies to bear the cost of tampons for operators. A further proposal, arrived from the world of road transport, is to install campers outside the port gates to make pads available also for those arriving from outside for the handling and transport of goods.