Expo .. "Awsha"... An Emirati tale from the world of myths

She saw a moon in the dream, and when she woke up she began to compose poetry. This is how the story of Aousha bint Khalifa Al Suwaidi began with the poems, which were presented by the show “Usha and the Moon” by the two directors Nahla Al-Fahd and Amna Belhoul, within 12 minutes. 2020 Dubai”, to take us to the h 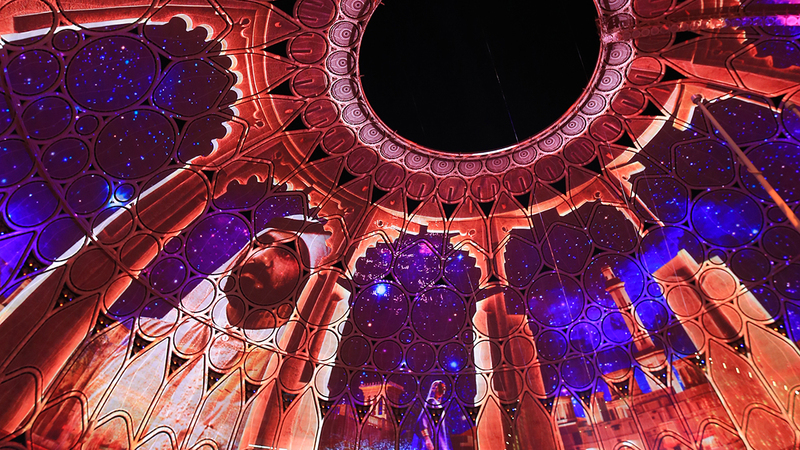 A poet dreamed that she swallowed the moon.. Mohammed bin Rashid called her “The Girl of the Arabs.”

Expo .. "Awsha"... An Emirati tale from the world of myths

She saw a moon in the dream, and when she woke up, she began to comb her hair.

This is how the story of Aousha bint Khalifa Al Suwaidi began with the poems, presented by the show “Aousha and the Moon,” by directors Nahla Al-Fahd and Amna Belhoul, within 12 minutes.

The show is presented daily on the Al-Wasl Dome at Expo 2020 Dubai, to take us into the life of the poet, and tell her story since childhood, until His Highness Sheikh Mohammed bin Rashid Al Maktoum, Vice President and Prime Minister of the UAE and Ruler of Dubai, awarded her the title of “Arab Girl”, He presented her with a pearl necklace that adorned the dome of Al-Wasl in its colors and image at the end of the show.

“Usha and the Moon” bears many dreamy colors and pulses with the Emirati identity, starting from the poet’s tale, to the depiction of the Barjeel and palm trees, the arts of Arabic calligraphy, and the poetic match between her and His Highness Sheikh Mohammed bin Rashid Al Maktoum, “All of these elements were mixed in the formation of this Emirati work. The integrated,” according to director Amna Belhoul, who confirmed to “Emirates Today” that “Aousa’s story is close to ancient legends, and we have decided that the stories told in Al Wasl Square should be global in orientation, especially since poetry is very important for people in the Emirates.”

The show, which is based on graphic drawings of dreamy colors, presents the Emirati identity in a distinctive way, displaying poetry in the art of Arabic calligraphy, accompanied by a group of Emirati symbols.

Belhoul adds: "Aousa dreamed that she swallowed the moon, and when she woke up, she began to compose poetry."

She added that she and director Nahla Al-Fahd contacted Dr. Rafia Ghobash "to confirm the complete novel, as she presented a documentary book about her life and experience, and from here came the integrated elements of the work."

Belhoul pointed out that she and director Al-Fahd relied on combining truth and fiction, to ensure Aousha's arrival on the moon in a manner that accurately tells the past and looks to the future.

And she explained: “We used all graphic techniques in the show, as we started working on the project during the (Corona) pandemic, and at that time travel was not available, and therefore technology was relied on a lot to complete the show.”

She explained that the work team hired a girl named Maryam Al-Suwaidi, from Al-Ain, and her expressions and words were picked up, and they merged with the expressions of another person, in Sydney (Australia), which gave the show its realistic dimension.

Belhoul indicated that the presentation team worked on developing the poems that His Highness Sheikh Mohammed bin Rashid Al Maktoum responded to, to document their poetic quarrels, and to give the story a depth of detail.

She said: "Work during the (Corona) pandemic was accompanied by many challenges, and we saw in this an opportunity to cancel the meaning of the impossible, when there is passion at work, all technology and capabilities can be adapted in order to reach the final result."

For her part, the director, Nahla Al-Fahd, confirmed that “Osha is a great stature in poetry, and she has influenced the literary arena, and she is one of the figures who deserves to shed light on her experience, especially in Al-Wasl Square, which speaks to all nationalities, and for this reason the work was produced in both Arabic and English.” .

She added: "Dr. Rafia Ghobash worked on documenting the life and poetry of Aousha in a book, and this book also documents the poems of the match between Aousha and the sheikhs and leaders in the Emirates, and it is a rich and important book in the field of Emirati poetry, and for this it was important for us to present this character in (Expo) to be known People are our poems and characters who have become icons in the literary field.”

In the show, music, sound effects, choral singing, the narrator's voice, and poetic recitation were combined, all of which make the audience merge with the work and the characters, and follow them to the end.

Al-Fahd stressed that the details of the voice and the recitation were given great care, as a 12-year-old girl was chosen to present the voice of Aousha as a child, so that the show would be very convincing to attend, and worked on the vocal recitation of the child, Dima Ahmed, while her voice was presented by Huda Al-Fahd when she grew up.

As for the voice of the story's narrator, written by the poet and writer Sheikha Al-Jabri, it belongs to the journalist Amal Mohammed, while the poems of His Highness Sheikh Mohammed bin Rashid Al Maktoum were recited by Mohammed Youssef.

• The show presents the poet's story with graphic drawings that combine truth and fiction.

• The show introduces others to Emirati characters who have become icons in literature.

Awsha bint Khalifa Al Suwaidi, "The Girl of the Arabs", is an Emirati poet and an exceptional and creative personality.

The poems are introduced into the show by music by Fayez Al-Saeed, who worked on the full music for the show.

Director, Nahla Al-Fahd, said that what distinguishes Fayez Al-Saeed is that he carries a special identity in highlighting Emirati melodies, especially since he worked on a large group of national works.

Al-Fahd stressed that "the melodies gave each poem its appropriate atmosphere, while creating beautiful spaces for dreaming."