At this summit, Xi Jinping elaborated on China's proposal for biodiversity conservation 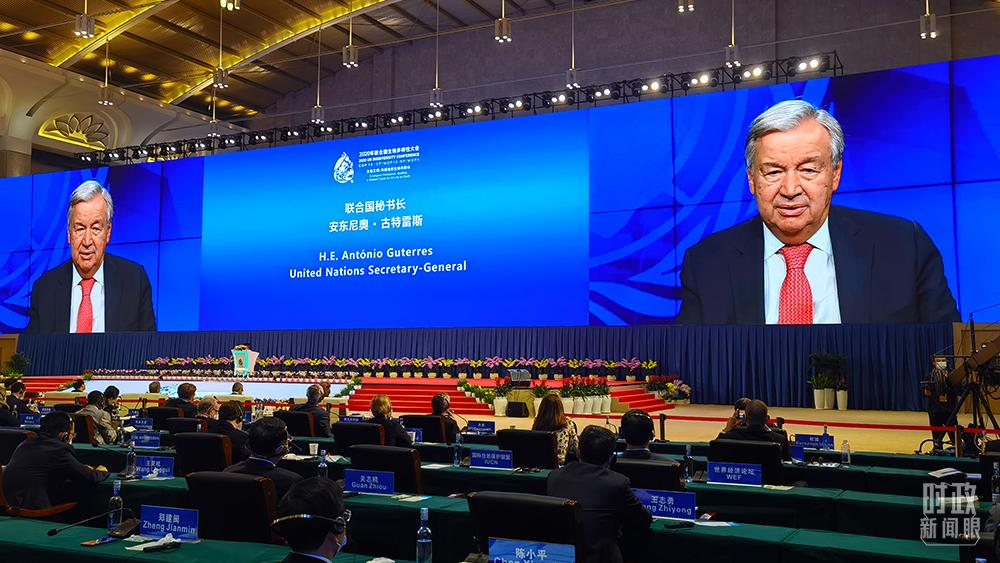 One year later, the 15th Conference of the Parties to the Convention on Biological Diversity was held in Kunming.

President Xi delivered a keynote speech at the leaders' summit.

The Covenant of Spring City stirred up the voice of China.

The Covenant of Spring City originated in Rio.

In June 1992, a conference to discuss the future destiny of the earth-the United Nations Conference on Environment and Development was held in Rio de Janeiro, Brazil.

The conference adopted the "Three Rio Conventions", including the "Convention on Biological Diversity."

China is one of the earliest parties to this convention.

Five years ago, China won the right to host the 15th Conference of the Parties.

Affected by the epidemic, the conference that was originally scheduled to be held last year was postponed twice, making it the most special and the longest one in all previous conferences.

The Covenant of Spring City must not only be done, but also done well.

On October 11, the opening ceremony of the first phase of the meeting was held in Kunming.

Elizabeth Murema, the head of the secretariat of the United Nations Convention on Biological Diversity, said in her speech, “The road to Kunming is full of challenges and it is longer than anyone expected.” She thanked the host for their unremitting efforts. Finally, this meeting was successfully held.

On the 12th, the leaders' summit was held in a combination of online and offline.

On the day of the leaders’ summit, President Xi delivered a keynote speech entitled "Together to Build a Community of Life on Earth," systematically expounding China’s propositions and solemnly declaring China’s measures.

In this important speech, President Xi talked about his dialectical thinking on several important propositions.

A few days ago, the first white paper on biodiversity protection issued by the Chinese government defined: it is an ecological complex formed by organisms (animals, plants, microorganisms) and the environment, and the sum of various ecological processes related to this, including ecological Three levels of system, species and gene.

Biodiversity provides mankind with a wealth of production and life necessities, a healthy and safe ecological environment and unique natural landscape culture, which are related to human well-being.

How to treat and treat the relationship between man and nature is an old proposition, and it is also what President Xi has always been thinking about.

On April 22 this year, at the leaders’ climate summit, the topic of President Xi’s speech was "Together to Build a Community of Human and Natural Life."

In his speech, he emphasized the conclusion that

man and nature should coexist harmoniously.

On the same day, President Xi put forward four propositions on the theme of protecting biodiversity. The first is: to coordinate the relationship between man and nature with the construction of ecological civilization as a guide.

Another question arises: How to achieve high-quality human development while respecting, conforming to, and protecting nature?

How to handle the relationship between economic development and environmental protection?

In his keynote speech on October 12, President Xi gave a clear answer: A good ecological environment is not only natural wealth, but also economic wealth, which is related to the potential and stamina of economic and social development.

We must accelerate the formation of a green development model, promote a win-win situation for economic development and environmental protection, and build a home for the earth in which the economy and the environment advance together.

The second point made by President Xi that day is to drive the green transformation to help global sustainable development.

He emphasized that we must establish a green and low-carbon circular economy system,

The third proposition is to focus on the well-being of the people and promote social fairness and justice.

such as protecting the environment, developing the economy, creating jobs, and eliminating poverty.

In April last year, Xi Jinping said during an inspection tour in Shaanxi, “

.” In his keynote speech on October 12, President Xi reiterated this sentence.

Promoting the formulation of the "Post-2020 Global Biodiversity Framework" is an important mission of the Kunming Conference.

How to advance global environmental governance?

The fourth point made by President Xi Jinping that day is related to this.

He pointed out that it is necessary to maintain a fair and reasonable international governance system based on international law.

The establishment of new environmental protection goals should

In September last year, a report released by the Secretariat of the Convention on Biological Diversity showed that the achievement of the biodiversity conservation goals previously formulated was generally not satisfactory.

In view of this, when agreeing on new goals, we must not only boost ambition and confidence, but also fully consider accessibility, operability, and development differences among countries in the world.

△Foreign guests at the conference that day.

"Go hand in hand, work together to build a beautiful world of harmony for all things!"

This is the call made by President Xi Jinping at the United Nations Biodiversity Summit a year ago.

In his keynote speech on October 12, President Xi Jinping announced a number of major measures.

President Xi announced that China will take the lead in investing 1.5 billion yuan to establish the Kunming Biodiversity Fund to support biodiversity conservation in developing countries.

Since 2019, China has become the largest contributor to the core budget of the Convention on Biological Diversity and its protocols.

China is also the largest developing country contributor to the Global Environment Facility.

In his speech that day, President Xi pointed out that China has officially established the first batch of national parks such as Sanjiangyuan, Giant Pandas, Siberian Tigers and Leopards, Hainan Tropical Rainforest, and Wuyi Mountain, covering an area of ​​230,000 square kilometers, covering nearly 30% of land-based countries. Focus on the protection of wild animal and plant species.

At the same time, the construction of national botanical garden systems in Beijing and Guangzhou will be initiated.

The recently released white paper "China's Biodiversity Conservation" pointed out that biodiversity is closely related to other ecological and environmental issues, and China has coordinated to promote the role of the Convention on Biological Diversity and other international conventions.

In his keynote speech on October 12, President Xi announced that China will build a carbon peak, carbon neutral "1+N" policy system, and will continue to promote the adjustment of industrial structure and energy structure.

These measures will make China's contribution to the global response to climate change.

"Take the way of nature to feed all things." To protect biodiversity is to protect our common home.