Recently, an unusual battle raged between the powerful Taxi Owners Association and the Istanbul city authorities. Being a taxi driver in a city that spans two continents, overlooking three waterways is no easy feat. And unlike other global cities, drivers don't own their cars 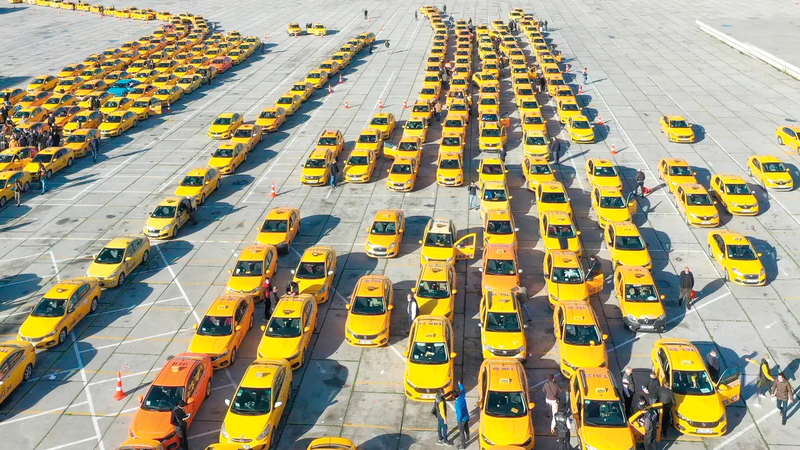 She opposed any changes that might affect her interests

Recently, an unusual battle raged between the powerful Taxi Owners Association and the Istanbul city authorities.

Being a taxi driver in a city that spans two continents, overlooking three waterways is no easy feat.

Unlike other global cities, drivers do not own their own cars. Instead, 50,000 taxi drivers, in Istanbul, drive 17,395 licensed cars, on shift.

When Turkish President Recep Tayyip Erdogan was mayor of Istanbul in the 1990s, the city was home to some eight million people.

Since then, the population has doubled, but the number of taxi licenses available has not changed.

The increase in demand resulted in a union of wealthy license holders, making the license price volatile, but it is currently at 2.6 million Turkish liras (£214,000).

As a result, this activity has a bad reputation. Many license holders remain anonymous, use intermediaries to rent their cars, and their union, which leans toward the ruling Justice and Development Party (AKP), has significant influence in both Istanbul's politically divided Transportation Coordination Center and the National Transportation Ministry. Uber tried to enter the Istanbul market in 2014, but was banned thanks to pressure from the union, which called them "undesirable" intruders. Last week, prosecutors filed an indictment against the chief Uber Turkey official on the grounds of unfair competition, and demanded imprisonment of up to two years.

Fights between yellow taxi drivers and other drivers are common, some of which can involve knives and guns, resulting in casualties. And if customers are lucky enough to find a taxi, this is often a difficult experience for them, and sexual harassment, racism, overpricing, rudeness and unsafe driving are common problems.

After receiving a record 43,000 complaints about driver behavior so far this year, the Istanbul municipality has accelerated its efforts to reform the way taxis operate in the city. Now the battle lines are drawn, things can get ugly. City officials want to end the privatization of taxis, running them through the municipality or local government instead, the way it is done in Berlin, New York and Dubai. “Only in Turkey do we have this system,” said Utku Ceyhan, head of the Istanbul Metropolitan Municipality Transportation Department. , as well as taxis, but the truth is that we do not have enough taxis.” "Reports show that we need to add 6000 licensed taxi plates, but the union refuses," Jihan explained.

He added: “Taxis are only part of the transportation system, but we need to integrate them better, to provide quality services to the entire city.

Ekrem Imamoglu was a little-known figure when he was chosen as the opposition coalition's candidate for mayor of Istanbul in the 2019 elections, but by insisting on his stance on renewal, after the Turkish Electoral Council annulled his victory the first time, Imamoglu became the AKP's most famous contender He ruled for years, ending 25 years of the ruling party’s dominance over the country’s cultural and economic scene.

Imamoglu's brilliance has waned a bit since then. He has been accused of courting anti-Syrian sentiment and criticized by the political left for supporting the government's 2019 campaign against Kurdish forces across the border with Syria. But many in Turkey, fed up with the country's worsening financial problems, see him A possible candidate against Erdogan, in the elections scheduled for 2023.

Istanbul accounts for about 30% of Turkey's GDP, and the city's loss had financial implications for the AKP's influence.

As expected, Ankara has made Imamoglu's tenure as mayor thus far a difficult challenge.

He is fighting battles with the presidency over funding, dealing with the epidemic, and the "crazy" Istanbul Canal project launched by Erdogan.

And if the mayor can win these battles, it will only increase the perception that the power of the old guard is dwindling.

For its part, the Taxi Owners Association said reform efforts should focus on using technology for more efficient use of taxis, rather than increasing the number of cars on the road, which will lead to increased competition.

For some drivers, there are concerns that working conditions will not improve, no matter who is responsible.

“I have been driving this car for five years and have never met its owner, and I pay my daily rent at the car center,” says driver Serdar Yilmaz.

They are a real mafia,” continues Yilmaz, who was taking a break at the taxi stand in the nightlife district of Beyoglu. “We don't have social security, and anyone can do that, if you are willing to earn a little.

“What Imamoglu is saying is that he will give the licenses to a city-run company, so maybe it will replace the existing plate owners with new owners, yet the licenses should be owned by the taxi drivers themselves,” the frustrated driver adds.

The mayor's office plan, which eventually proposed an additional 1,000 licenses instead of 6,000, was rejected. For now, the municipality has decided to move forward with creating its own licensing system, in parallel with the current one.

So far, it has hired 1,000 shared minibus drivers, who had lost their jobs due to the Corona pandemic.

The taxi war has begun in Istanbul, drivers have to start their engines, and be prepared.

• For the time being, the municipality has decided to move forward with establishing its own licensing system in parallel with the current system.

• For some drivers, there are concerns that working conditions will not improve regardless of who is responsible.

• 43,000 complaints about the behavior of drivers in the city since the beginning of the year.