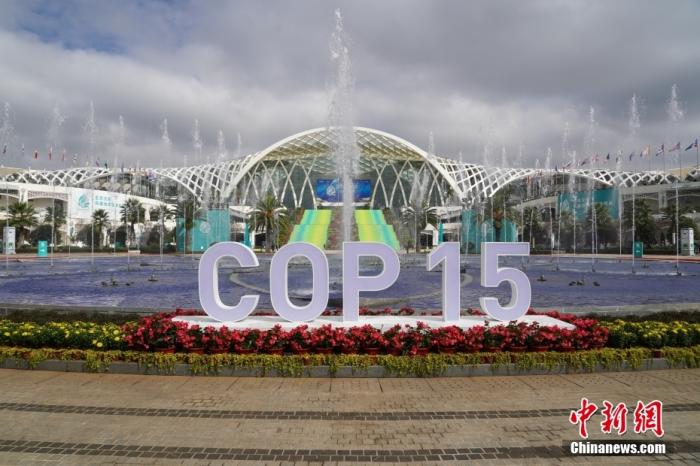 China News Service, Kunming, October 12th (Reporter Han Shuainan Hu Yuanhang Zhang Chenyi) On the 12th, at the Ministerial Plenary Meeting of the 15th Conference of the Parties (COP15) of the Convention on Biological Diversity held in Kunming, China, many representatives In his speech, words such as "urgent", "coordination" and "action" appeared frequently.

Elizabeth Murema, Executive Secretary of the Secretariat of the Convention on Biological Diversity, said that 2020 is a disruptive year. During this year, mankind has further realized the close relationship between ecology, society and economy, and has also further understood Systemic risks caused by the destruction of nature.

"Mankind is facing some extreme difficulties during this year, which makes us more aware that we must act as soon as possible and make concerted efforts to stop climate change, land degradation and the loss of biodiversity."

On October 12, Kunming, Yunnan, outside the venue of the 15th Conference of the Parties of the United Nations Convention on Biological Diversity, a fountain opened to welcome guests.

Ibrahim Tio, Executive Secretary of the Secretariat of the United Nations Convention to Combat Desertification, believes that climate, biodiversity, land and ocean are closely linked. While humans are increasing land pollution, ocean pollution will also increase, which will affect all aspects. The impact is even greater.

"Humanity must deal with climate change, desertification, ecosystem restoration and other issues at the same time. We don't have 50 years or 100 years. Our time is very urgent." He called on all parties to reach a strong biodiversity as soon as possible. frame.

Patricia Espinosa, Executive Secretary of the Secretariat of the United Nations Framework Convention on Climate Change, said that more and more countries have adopted comprehensive actions to address climate change and biodiversity issues.

Statistics in 2016 show that 60% of countries in the world have focused on biodiversity and ecosystems. By 2021, this number has risen to 75%.

On October 12, the Fifteenth Conference of the Parties Leaders Summit of the Convention on Biological Diversity was held in Kunming, Yunnan by a combination of online and offline methods.

"The entire UN system and corresponding agencies, as well as global governance under the multilateral system, should all carry out coordinated actions."

Huang Runqiu, Minister of China's Ministry of Ecology and Environment, said in his concluding remarks that all participants in the meeting agreed that biodiversity is the foundation of human health and economic growth.

At present, human beings have experienced natural disasters, climate change, environmental pollution, and public health crises. Faced with the severe situation of biodiversity loss, all parties should commit themselves to promoting sustainable development through biodiversity and pushing humanity towards a new ecological civilization. Journey.

Huang Runqiu said that the representatives emphasized that to achieve the post-2020 global biodiversity target, it is most important to take practical actions.

The conservation of biodiversity should be given priority in policy formulation and implementation.

Take effective measures to achieve changes in the food system, infrastructure investment, energy, and land use.

It is necessary to strengthen the mobilization of resources between the public and private sectors, establish an open and transparent implementation mechanism, reverse the loss of biodiversity, and achieve the grand goal of living in harmony with nature.