The statue was erected in memory of the protesters in Tiananmen Square and has stood on the campus for more than two decades. Now the University of Hong Kong has decided to remove the famous statue "Pillar of Shame". 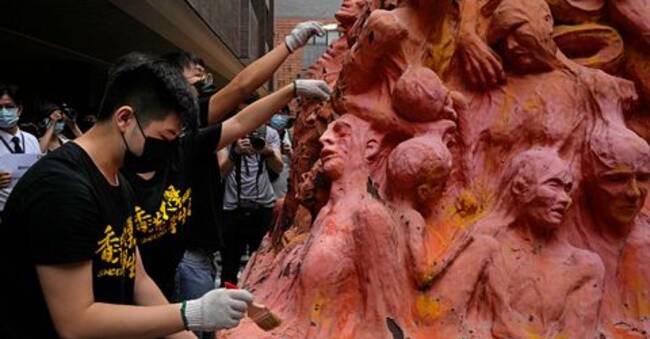 The eight-meter-high copper statue depicts 50 anxious faces and tortured bodies stacked on top of each other.

It was erected in memory of the protests and massacre in Tiananmen Square in Beijing in 1989, and is made by the Danish sculptor Jens Galschiøt.

Not recognized - and forbidden to celebrate

This year marks 32 years since the events at Tiananmen Square, when Chinese forces opened fire on protesters and killed hundreds of people.

The protests were mainly about democracy, human rights and increased freedom of the press and expression.

"Pilar of Shame", or "Pillar of Shame" in Swedish, has been on the campus of Hong Kong's oldest university for over 20 years.

The university states that the request to take down the statue is "based on the latest risk assessment and legal advice", writes the news agency AFP.

In China, the celebration of the massacre is forbidden, and the ruling Communist Party has still not acknowledged that any massacre took place.

Until recently, Hong Kong and Macau have been the only regions on Chinese territory where it has been allowed to pay attention to the anniversary.

The sculptor Jens Galschiøt says in a comment according to AFP that he is shocked if there are plans to "desecrate" the only memorial to such an important event in Chinese history and that the removal of the statue illustrates the ongoing cleansing of dissent in the region.

- I want the pillar to stay in Hong Kong, in the same place as it is today, says Galschiøt.

According to The Guardian, groups and places linked to the massacre have become the latest target of the national security law introduced by China last year.

This summer, Chow Hang Tung, one of the prominent democracy activists in Hong Kong, was arrested after drawing attention to the anniversary on 4 June.

If you fight for democracy in an authoritarian regime, it is inevitable that you will be arrested, the activist told the BBC before she was arrested.