"Technological consistency": the leaders of "Kronstadt" - about the capabilities of the UAV "Orion" and plans for the development of the company

Five years ago, the first flight of the Orion heavy reconnaissance and strike drone took place. This device became the first Russian UAV belonging to the elite class MALE (Medium-altitude long-endurance). Orion received a successful baptism of fire in the Syrian operation, and since 2020, the drone has been supplied to the Russian Aerospace Forces. On the occasion of the anniversary of the debut flight of this unique RT drone, I talked with the management of the development enterprise - the general director of Kronshtadt JSC Sergey Bogatikov and the general designer of this company Nikolai Dolzhenkov. They talked about the capabilities of their brainchild and shared plans to increase the production of other UAVs. 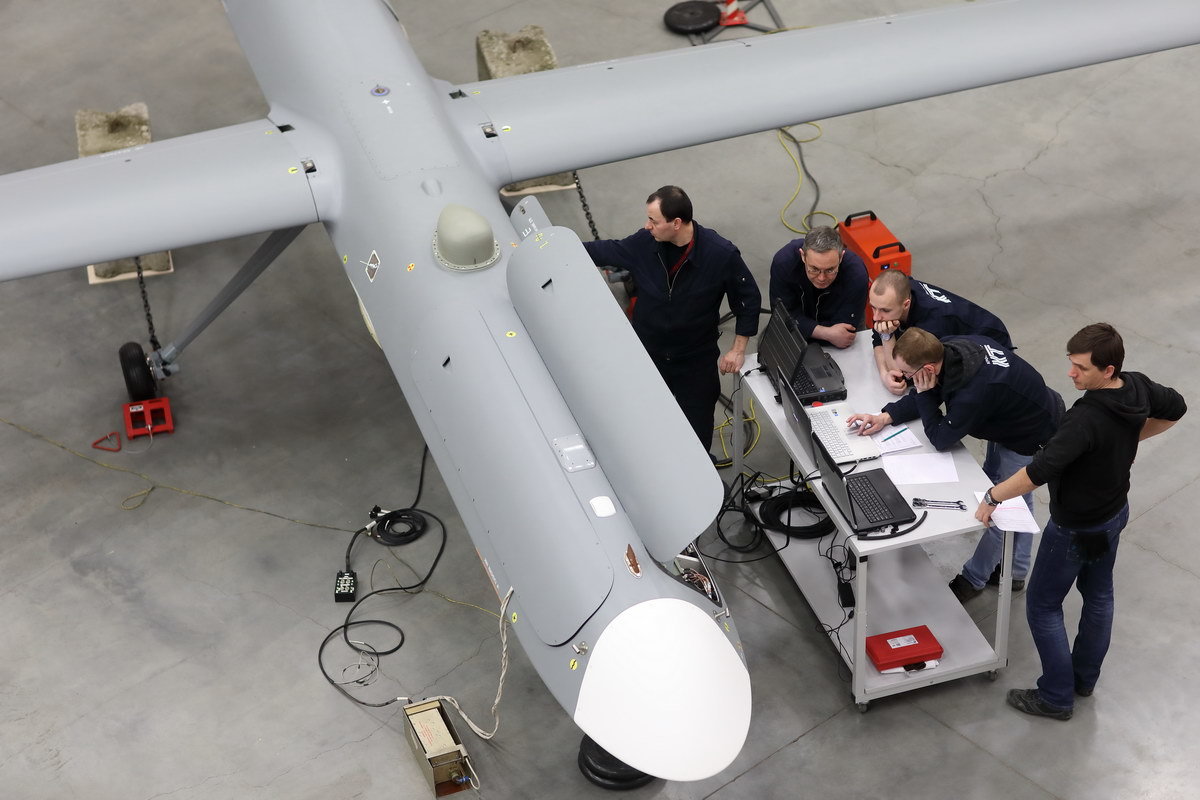 How long did the work on "Orion" ("Pacer") take, if we count from the beginning of the design to the first flight on October 10, 2016?

What resources were required for this?

In 2011, Kronshtadt JSC became one of the four Russian companies - the main performers of R&D (development work. -

) to create the latest complexes with UAVs (UAVs) for the Russian Ministry of Defense.

The experimental design work of the "Pacer-UAV" started at the end of 2011.

The first complex with the Orion UAV was handed over to the Russian Ministry of Defense in April 2020.

At the beginning of 2020, the Kronshtadt company became the first domestic company in the history of Russia to receive an opinion on the possibility of mass production of a large-size UAV.

Today our "Orion" is a permanent participant of aerospace shows and military-technical forums in Russia and abroad, and, as you know, the complexes received by the Ministry of Defense under the contract take part in exercises.

Our company is a full-cycle enterprise for the creation of unmanned aerial systems.

We carry out the whole range of works, from design to testing and certification, have more than ten years of experience in the development, manufacture and operation of unmanned systems.

We have a strong design bureau.

There are about 400 developers in Kronstadt alone, most of them are young people under 40.

In the manufacture of the Orion complex, only Russian materials, components and assemblies are used.

Kronshtadt has developed and implemented in pilot production a technology for creating long composite structures from polymer materials based on carbon fiber up to ten meters in length.

Detailed computer modeling allows for fast and accurate assembly of the complex.

We have our own software development center located in St. Petersburg.

We ourselves are making a universal ground control center for unmanned aerial vehicles of both aircraft and helicopter types.

Kronstadt has a pilot production facility in Moscow.

The devices are produced there in small series, but we are expanding this production site.

By the end of this year, several buildings will be put into operation at the pilot plant: for aggregate assembly, for the manufacture of the ground part of complexes with UAVs and a laboratory building.

Now a serial plant is being built in Dubna, which will, in fact, become the first specialized center for unmanned production in Russia.

It will assemble both aircraft-type drones and unmanned helicopters.

We took up the helicopter theme this year - we acquired the Strela research and production enterprise, which specializes in the development of helicopter-type unmanned aerial vehicles.

- Okay, but the reconnaissance and strike drone

is still a very complex product.

It is hard to believe that Kronstadt develops and manufactures Orion exclusively by its own efforts.

What contribution are other domestic enterprises making to the implementation of this project?

Yes, you are right.

Our cooperation is quite wide.

In the list of key suppliers of components for Orion, we have more than 50 enterprises.

The share of Kronstadt's own work in the Orion project, depending on the modification of the apparatus, ranges from 40 to 60%.

These indicators are higher than those of the traditional aviation design bureau, and with the further improvement of unmanned systems, our share of work will increase.

Now the enterprises of the Kronshtadt group of companies carry out all the work related to the manufacture and assembly of the aircraft's airframe, the bulk of the work on the engine, the production of avionics components, for example, the onboard information and computing system, and a number of other equipment is being carried out.

The most important thing about UAVs is software.

Here it is 90% produced in the Kronshtadt group of companies, this is the most important and expensive work.

And the Orion communications complex is already the full responsibility of our company, including in the version of a complex with satellite communications.

If we talk about such specific components as target loads, optical and radar devices, reconnaissance equipment, then their development requires special equipment, a team of highly specialized employees and significant experience.

Therefore, we turn to specialized organizations for the supply of these components.

What is the specificity of this type of UAV, how difficult is it in principle to create such devices?

Orion is an unmanned aerial vehicle with a long duration of flight, the initial task of which was to conduct aerial reconnaissance day and night in a wide range of climatic conditions.

Today "Orion" is used not only for reconnaissance, but also for strike purposes.

the device can stay in the air for more than a day.

Orion has an open architecture, which allows us to adapt to the consumer.

At the request of the customer, we can install on the UAV those payloads and aircraft weapons that he wants.

These are large-sized drones equipped with all the systems of a "large" aircraft.

At the moment, such UAVs are the most high-tech of the mass-produced ones.

Until recently, MALE class devices were produced only by the USA and Israel.

Later, the PRC and, more recently, Turkey joined this group of countries.

The presence of its own MALE UAV program can be called an indicator of the country's technological viability in the field of unmanned vehicles.

What can you say in general terms about the reconnaissance and striking qualities of the Orion?

How did you manage to surpass the Israeli and NATO UAVs with approximately the same weight and size characteristics?

I can say that during the time of R&D (research work. -

) and R&D on heavy-class UAVs, we managed to significantly catch up with the world's leading leaders.

The Orion project is a vivid proof of this.

We have created a universal platform, which we constantly develop and use to develop advanced technologies and develop new devices.

In my opinion, in the future, the main competitors (Russian vehicles -

) in the export market will not be American or Israeli UAVs.

They will be Chinese drones.

Just look what kind of exposition the PRC presented at the international exhibition in Zhuhai this fall (Airshow China 2021. -

The range of Chinese drones and, importantly, the pace of their development is much higher than what is done in all other countries.

- China really knows how to surprise, but let's hope that our country will also gain a significant share in the international UAV market in the future.

At the beginning of our conversation, it was said that a plant is being built in Dubna near Moscow.

What plans does Kronstadt have with this new production site?

In the science city of Dubna, Kronshtadt is building the first specialized serial plant in Russia for the production of large-size drones.

This has not happened before in our country.

We began construction of the plant in April of this year, and it is planned to launch production at the end of the year.

This is a record time, some say that such a pace of construction was not even in the USSR.

At the plant in Dubna, our entire line of drones will be produced: flagship Orions, heavy reconnaissance and shock Sirius, the supply contract for which was signed by the Russian Ministry of Defense and we at the Army-2021 forum, promising high-speed shock UAVs "Thunder", unmanned aircraft of the "Helios-RLD" radar patrol.

It will also produce a line of helicopter-type unmanned aerial vehicles, developed by specialists from Strela Research and Production Enterprise, which is part of Kronstadt.

This refers to unmanned helicopters for firefighting and other civilian missions.

Also in Dubna, unmanned helicopters "Platform" and "Termit", contracted at the forum by the Ministry of Defense, will be produced.

The enterprise will produce dozens of drones annually.

I would also like to note that the new plant is located next to the Dubninsky Machine-Building Plant named after N.P.

Fedorov, where the ground part of the control of our unmanned complexes will be manufactured.

Ground control posts created by our specialists are universal.

They allow you to control drones of both aircraft and helicopter types, and not only the development and production of our company.

Such experiments have already been carried out.

For example, we checked the interaction with the Orlan-10 and ZALA vehicles.

As a result, the task of joint actions of a mixed group of different types of UAVs was successfully modeled and worked out in conditions close to a real battlefield, saturated with electronic and fire countermeasures.

The obtained positive result in the management of groups of different types of UAVs demonstrated the promising and correct development path for the use of artificial intelligence technologies.

That is, on the basis of a ground control point from the Orion-E reconnaissance and strike complex, it is possible to create a centralized control system for heterogeneous unmanned aerial vehicles.