Pembroke was 75 years old at the time of his death. Rock musician Jim Pembroke, who moved from England to Finland in the 1960s, has died. Jim Pembroke’s daughter Emma Pembroke told Yle News that her father had health challenges recently. Pembroke slept peacefully away from his home. - He wanted to wish all his friends all the best and "Keep the Good Times Rolling". She hoped all her friends would hear this message, Emma Pembroke told Yle. Wigwa 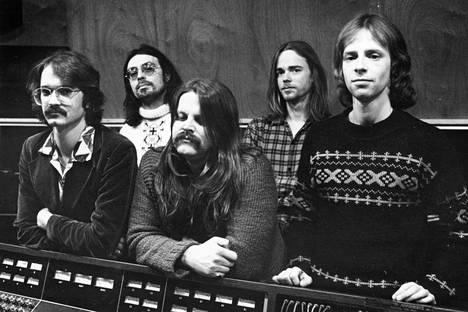 Rock musician Jim Pembroke, who moved from England to Finland in the 1960s, has died.

Pembroke slept peacefully away from his home.

- He wanted to wish all his friends all the best and "Keep the Good Times Rolling".

She hoped all her friends would hear this message, Emma Pembroke told Yle.

Pembroke is best known as the frontman of Wigwam, who played progressive rock.

Prior to Wigwam, he co-founded Blues Section.

Wigwam at the 50th anniversary tour at the Culture House in 2018. Photo: EMILIA ANUNDI / HS

Pembroke has composed, lyricized and sung on the records of many of Finland's top caste artists.

Pembroke has composed the Eurovision songs Reggae OK and Nuku for the bomb.

In the late 1970s, Pembroke made lyrics and compositions for the Hurriganes.

He was also occasionally involved as a pianist at the band's gigs.

James Frances “Jim” Pembroke from London arrived in Finland for the first time on the last day of April 1965.

- I saw that this is a great place - like Rio de Janeiro: happy people celebrate on the street, almost everyone has white caps on, he described to Ilta-Sanomat in 2018.

The 19-year-old Englishman came to Finland for love.

She had met a Finn who had worked as an au pair in London, who she still describes as “the most beautiful woman she had ever seen”.

After saving three months of money, he arrived in Finland by cargo ship.

He traveled by bus from Helsinki on May Day to Varkaus, where the au pair lived.

As early as the summer of 1965, Varkaus moved to Helsinki, when Jorma Weneskoski, an active program seller at the time, heard English talent on the Kämär dance stage.

Pembroke had just climbed the stage to perform a couple of songs with Eero and Jussi Raittinen Boys as a guest.

In Helsinki, Pembroke first played and sang in the Beatmakers and Pems ensembles alongside Pepe Wilberg, then the backing band became Raittisten Boys - and then the already quite well-integrated British founded the Blues Section and Wigwam bands considered important in Finnish rock history.

WIGWAM was a band praised and admired in the 1970s, internationally interesting because of Pembroke’s natural English and the musical virtuosity of the entire band.

Its most famous album, Nuclear Nightclub, was released in 1975, just a year after the band was about to break up.

Keyboardist Jukka Gustavson and bassist Pekka Pohjola had resigned from the band to focus on their solo productions.

The most enthusiastic part of progressive rock left Wigwam with the duo.

After that, the responsibility for making the song passed completely to Pembroke and to guitarist Pekka “Rekku” Rechardt, who joined the band in 1973.

The style became the most popular.

Many Finns are also familiar with Jim Pembroke's name from Eurovision: he composed the Finnish songs in 1981 and 1982. However, Riki Sorsa's Reggae OK and Kojon Nuku's bomb did not succeed.

That’s why Pembroke didn’t control his nights: if the music isn’t made because of conquests, he doesn’t think it’s meant to compete either.

"Eurovision doesn't mean anything to me," Pembroke said at the time.

- A much tougher thing was Wigwam - and that’s when we performed in Hyde Park.