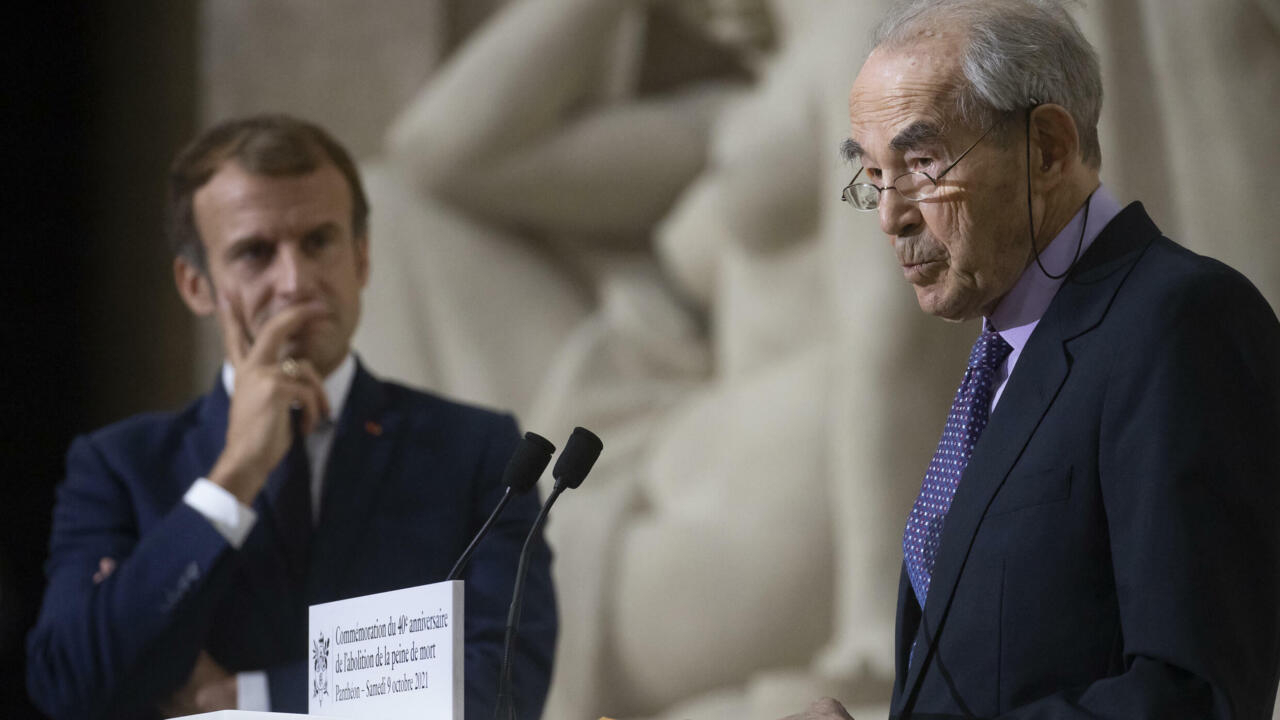 Emmanuel Macron and Robert Badinter launched on Saturday a vibrant call for the "universal abolition" of the death penalty, the Head of State announcing a "meeting at the highest level" in early 2022 to "convince" the countries that still apply.

"The death penalty is doomed to disappear in the world because it is a shame for humanity," said Robert Badinter, the former Minister of Justice who had the abolition adopted just 40 years ago on the 9th. October 1981.

"Long live the universal abolition!", He concluded with a voice of stentor which resonated under the dome of the Pantheon, where was celebrated the anniversary of a law which marked France and the presidency of François Mitterrand .

"The revolution that you have carried has taken root in the life of the French nation without increasing, as your opponents predicted at the time, bloody crime", underlined the Head of State.

François Mitterrand's campaign promise despite a predominantly hostile opinion, the abolition was voted by the National Assembly on September 18, 1981, then on September 30 by the Senate.

The scrapping of the guillotine was enacted on October 9, four years after the last execution.

In 1981, France was "the 35th state to abolish the death penalty," Emmanuel Macron recalled.

Since then, "106 states have so far taken this path while 50 others respect a de jure or de facto moratorium on executions," he said.

But, he immediately added, "in France and in Europe, voices that were believed to be stifled are emerging from the depths of history to call for the reinstatement" of the death penalty.

Robert Badinter and Emmanuel Macron on October 9, 2021 at the Panthéon in Paris for the 40th anniversary of the abolition of the death penalty Ian LANGSDON POOL / AFP

While the question was no longer debated at the political level, it was invited into the pre-presidential campaign when the polemicist and potential candidate Eric Zemmour declared himself "philosophically" "in favor" of the death penalty .

"I don't think we did well" to abolish it, he added last month.

Robert Badinter, however, considered improbable a return of the death penalty in Europe, where "today, there would not be a magistrate who would pronounce" in his favor "in the international jurisdictions".

The objective is above all to "lead a new fight", that of "universal abolition" while "483, a number certainly underestimated, executions" were perpetrated in the world in 2020, according to Emmanuel Macron.

Robert Badinter on October 9, 2021 at the Panthéon in Paris for the 40th anniversary of the abolition of the death penalty Ian LANGSDON POOL / AFP

"483 state murders administered by 33 political regimes which have for the most part a shared taste for despotism, the rejection of the universality of human rights, but not only", he denounced.

The death penalty is still in force in China, the United States, Iran and some thirty African countries.

Emmanuel Macron announced that, as part of the French presidency of the European Union in the first half of 2022, France would organize "in Paris with the NGO Ensemble contre la penalty de mort, a meeting at the highest level bringing together companies. civilians of States still applying the death penalty or a moratorium in order to convince their leaders of the importance and the urgency of abolishing it ".

Then, during the next UN General Assembly, "France, with its EU partners", will mobilize "around a resolution so that, each year, the states that have not abolished the death penalty communicate to the UN the number of sentences handed down and the number of executions carried out, "he added.

Present at the Pantheon, Matthew Godberg, president of the World Coalition Against the Death Penalty, which brings together 165 NGOs around the world, welcomed these announcements, saying he was convinced that the abolition of the death penalty was "in the long term. inevitable".

Seventeen French people, including a woman, are still sentenced to death abroad and currently detained in six states: one in Algeria, one in China, one in the United States, one in Indonesia, eleven in Iraq and two in Morocco , according to Together Against the Death Penalty.