The 2021 Nobel Prize in Literature reveals how literary works shape the spiritual world?

Chinanews, October 7 (Guo Xinwei) The annual Nobel Prize "lottery season" is still going on. On October 7, Swedish time, the Swedish Academy announced that the 2021 Nobel Prize for Literature will be awarded to Tanzanian novelist Abdulrazak Gurnah, in recognition of “his influence on colonialism and cultural and continental Uncompromising and sympathetic attention to the fate of refugees in the 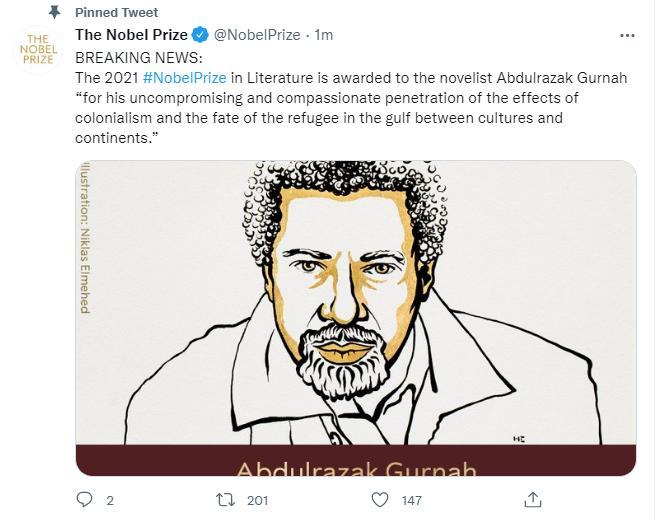 On October 7, Swedish time, the Swedish Academy announced that the 2021 Nobel Prize for Literature will be awarded to Tanzanian novelist Abdulrazak Gurnah, in recognition of “his influence on colonialism and cultural and continental Uncompromising and sympathetic attention to the fate of refugees in the chasm."

Abrazak Guna was born in 1948, grew up on the island of Zanzibar, Tanzania, and arrived in the UK as a refugee in the late 1960s.

Abrazak Guna writes in English and currently lives in the UK.

He has published ten novels and some short articles, and refugee-related themes run through his works.

His representative works include "Heaven", "The Seaside" and so on.

Counting the winners this time, since 1901, more than 110 writers have won the Nobel Prize. There are not only the well-known "literary and artistic icons" such as Marquez, Hemingway, and Tagore, as well as the relatively small ones. Low-key strength faction".

On November 27, 1895, the famous Swedish chemist Alfred Bernhard Nobel proposed in his will the establishment of five award areas, and literature was placed fourth by him.

Nobel stated in his will that part of the bonus should be awarded "a prize to the person who created the best works with ideal inclinations in the literary world".

Since 1901, the Swedish Academy began to award the Nobel Prize for Literature, which was suspended many times due to wars and other reasons.

In history, famous writers such as Yeats, Roman Rowland, Bernard Shaw, Hemingway have all won this award.

Data map: On December 10, 2020, the Nobel Prize Award Ceremony was held online at the Stockholm City Hall, the capital of Sweden.

According to the information on the official website of the Nobel Prize, those who have the right to nominate candidates for the literary prize include: members of the Swedish Academy and other related colleges, research institutes and societies; professors of linguistics and literature; former Nobel Prize winners in literature; Chairman of the Writers Association of the Chinese Literary Circle.

The annual nomination of the winners must be submitted to the Nobel Prize Committee before January 31. The nomination should but does not have to be accompanied by reasons, and the nominators cannot nominate themselves.

Normally, there will be about 350 nominations each year.

During the spring, the Nobel Prize Committee will review these nominations and submit a preliminary list of about 20 candidates to the Swedish Academy for review in April.

Before the summer vacation, the list is usually further screened to about 5 people.

In October, the Swedish Academy made the final choice.

Usually, the Nobel Prize award ceremony will be held in December in Stockholm, Sweden, but the Nobel Foundation announced in September this year that due to the impact of the new crown epidemic, the Nobel Prize in Physics, Chemistry, Physiology or Medicine, and Literature will be awarded in 2021. The winners of the awards and economics awards will continue the 2020 approach and receive relevant awards in their respective countries.

Although regarded as an authoritative award in the literary world, the Nobel Prize in Literature is not without "accidents."

The judges compared him to the "greatest living poet" like Homer, and believed that he "created a new poetic expression in the great American song tradition."

This decision caused widespread controversy, with critics saying that the decision of the award committee was only to "please the masses."

The Swedish Academy said, “Dylan enjoys idol status. He has a profound influence on contemporary music.”

In fact, this is not the first time that the Nobel Prize in Literature has been "accidental."

In 1953, another "outsider" in the literary world, former British Prime Minister Churchill, won an award.

The Swedish Academy stated that he won the award "because of his accomplishments in describing history and biography, and also because of his brilliant speech that defends the value of noble people."

In addition, in principle, the Nobel Prize cannot be awarded to a person who has passed away. However, there was an exception in the literature prize: in 1931, the prize was posthumously awarded to the dead Swedish writer Eric Axel Karlfeld. .

This Swedish poet was previously a member of the award-giving Swedish Academy and was nominated for the Nobel Prize in Literature several times. He won the award at the end of the year he died.

Data map: Sarah Danios, permanent secretary of the Swedish Academy who resigned due to the scandal.

However, compared with the divergent "legacy" and "accidents", the Nobel Prize in Literature in recent years has caused a greater impact on a sex scandal.

In November 2017, 18 women came forward to accuse Arnault of sexual assault and harassment, and some of the incidents occurred in premises belonging to the Swedish Academy.

In addition, Arnault is also suspected of leaking the list of winners of the Nobel Prize in Literature to the gaming company seven times.

This scandal plunged the Swedish Academy into an unprecedented crisis. The way some academicians dealt with this incident and the extreme dissatisfaction of some staff members for protecting Frostenson over “friendship” triggered a wave of resignations.

Those who resigned include Frostenson and the permanent secretary of the Swedish Academy Sara Danius (Sara Danius).

Due to the insufficient number of voters, the judging work for the 2018 Nobel Prize in Literature could not continue and was forced to cancel.

In 2019, the Nobel Prize Jury underwent a large-scale adjustment. In order to restore its reputation, five external experts were added to the Jury to ensure the independence and impartiality of the awards before it “returned on the road”.