Summary: The first day of Nishan Forum focuses on global cooperation and multinational scholars call for equal and respectful dialogue among civilizations 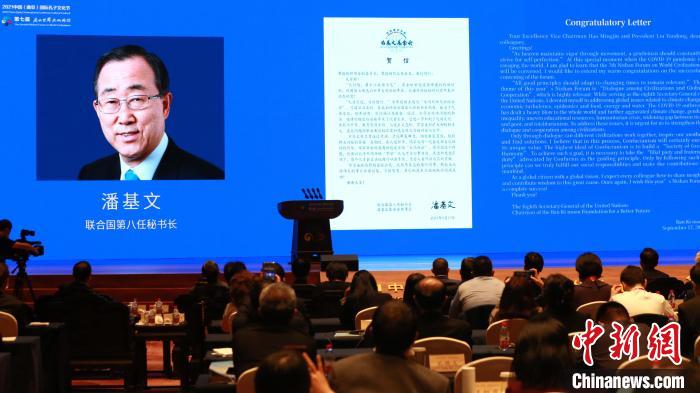 Traveling through multiple dialogue sites, the reporter found that the experts and scholars at the conference were very focused on global cooperation, and in their exchanges and speeches, they suggested that understanding and trust must be rebuilt in order to cooperate.

With the opening of the forum, in multiple parallel group dialogues, finding the basis of mutual trust for international cooperation through civilized dialogues has become a hot key word.

In the first group dialogue of this Nishan Forum entitled "Cultural Power in the Global Anti-epidemic", Li Pingsheng, the host and professor of history at Shandong University, said that because the epidemic is still raging around the world, the three foreign experts in this group cannot They can communicate directly at the scene and can only broadcast their video speeches on the spot.

Mankind is now facing a common dilemma and calls on all countries in the world to cooperate in the fight against the epidemic.

In today's world, only the Civilization Forum can call back the trust and respect between countries.

Cai Jiahe, a professor of philosophy from Tunghai University in Taiwan, delivered a speech entitled "Confucian Thoughts on the World Situation under the New Coronary Epidemic" at the Nishan Forum sub-forum through video: "The epidemic is dangerous, the world shakes, conflicts and riots have profoundly affected the world The situation has had a great impact on human nature. Does Chinese culture help here? In the face of the epidemic, protectionism is ready to move. Can our traditional culture, especially Confucian wisdom, provide good solutions for the world to face the challenges of the epidemic? "

Cai Jiahe focused on the incidents in which the "Diamond Princess" cruise ship, which was deeply trapped in the vortex of the epidemic, stopped and was rejected along the way. He believed that the incidents vividly tested and demonstrated the human nature of countries along the route, and Westerners who advocate individual rights often face benefits and disasters. It fully reflects the selfish and evil aspects of its human nature, which is in sharp contrast with the self-disciplined and responsible Orientals.

In the four group conversations that day, the reporter heard such comments.

The individualism that pursues the supremacy of individual rights and the Eastern sense of responsibility ethics influenced by the Confucian patriarchs have formed a completely different result.

In the face of the raging virus, Western countries are still struggling with basic issues such as whether to wear a mask, whether to scan a QR code, and whether to restrict the movement of people.

The international development of specific medicines and vaccines has so far failed to reach a consensus.

On September 27, the Nishan World Civilization Forum was held in Qufu. The picture shows the "high-end interview" activities of the forum.

In a high-end interview at the Nishan Forum hosted by the famous CGTN host, Wang Guan, Ye Xiaowen, deputy director of the Cultural, History and Learning Committee of the National Committee of the Chinese People's Political Consultative Conference, An Lezhe, professor at the University of Hawaii, and Yang Huilin, former vice president of Renmin University of China, in more than an hour of dialogue, Almost all topics revolve around how the East and the West deal with the issue of cooperating in the fight against the epidemic.

On September 27, the first high-end dialogue of the 7th Nishan Forum on World Civilization was held.

The many problems facing the world today are related to the destiny of mankind. No country can take care of itself. It must put aside hostility and conflict, respect each other, understand each other, and work together.

Ye Xiaowen’s point of view is, “The mutual learning of world civilizations is our common aspiration, but we see more of the clash of civilizations.” Although the current global epidemic situation is severe, people should realize that resisting the raging virus requires not only natural science. For vaccines, there is also a need for “cultural vaccines”.

Because the East and the West have not yet been able to reach mutual trust in fighting the epidemic together, some Western countries continue to create "political viruses" on the contrary.

Civilized dialogue should eliminate these "political viruses" through dialogue, so that people can return to rationality, realize face-to-face communication with equal respect, eliminate misunderstandings, and work together.

Ye Xiaowen also delivered a keynote speech entitled "Cooperation and Trust: Cultural Power in the Global Anti-epidemic" at the opening ceremony of the forum, formally calling for a dialogue between civilizations to promote the sharing of information among all nations and jointly develop vaccines, relying on the power of science and culture. , To eliminate misunderstandings and distrust, and defeat the common new coronavirus enemy through global cooperation.

Nearly 200 experts and scholars at home and abroad will conduct 30 dialogue and exchange activities.

Professor An Lezhe, a world-renowned philosopher and sinologist from the University of Hawaii in the United States, specifically mentioned that human beings are currently facing many problems and perplexities at the same time. "Problems exist objectively and need to be solved reasonably by us. Other perplexities belong to our understanding. We need to empathize with the problems of consciousness, communicate with each other, and resolve them after building trust.” In An Lezhe’s view, China and the West should trust each other and should not compete with each other. They should achieve the understanding and tolerance of cultural traditions and ways of thinking. Sexually stand on the standpoint of each other to see the problem.

Don't deliberately elevate the most basic freedom, human rights, and democracy to a very high position. Instead, we should realize the restoration of civilization through the path of "harmony without difference".

An Lezhe described how he promoted Eastern culture to Westerners through translation, academic and teaching activities, including the concept of responsibility ethics in Eastern Confucian classics.

He said that compared to the individualistic life philosophy of most Americans, when he introduced Confucian thought to Western young people, he paid more attention to recommending the word "home" to them. The concept of "home" in the East permeated all aspects of life. For example, "people", "country", and "everyone". Orientals often have a sense of ethical responsibility and perform their role as a member of the relationship, rather than the individualism and absolute isolation of the "people" emphasized by Westerners. Meaning.

This spirit of An Lezhe won warm applause from the guests and the audience.

Experts believe that civilized dialogue means to let go of prejudice, treat them equally, and respect and understand from the perspective of the other party.

Equality and respect are the basis for dialogue among civilizations.

The scholars who participated in the group dialogue of the Nishan Forum believe that trust is not about doing business, it can be achieved through the exchange of interests, nor is it war. It can be surrendered by relying on power.

As one of the salient attributes of civilization, trust requires all parties to sit down and respect each other. Based on such an atmosphere of dialogue, can we meet each other, eliminate misunderstandings, and increase understanding before we can work together.

The reporter learned that in this Nishan Forum, 172 scholars finally gathered in Nishan under the background of the serious confrontation between the East and the West and the continual escalation of the global new crown epidemic.

Among them, 20 overseas scholars participated in the conference through remote video, showing their urgent desire for civilized dialogue.

In just one day of dialogue and exchanges and keynote speeches, the reporter heard Academician Zhang Boli scream: “As long as a country does not eliminate the epidemic, no one can stand alone.” I also heard Chen Lai, a Confucian scholar, comment on “peace, development, fairness, and justice”. "Democracy, Freedom" is profoundly explained, and I have heard Professor Yang Huilin, a Confucian who integrates China and foreign countries, like a clear spring flowing through the silent academic analysis.

Beginning in 2011, a group of followers of Eastern wisdom have been determined to overcome many difficulties for ten years and came to the birthplace of the Eastern saint Confucius, declaring to the world that "gentlemen are harmonious but different", "gentlemen are magnanimous" and "self-sufficiency". Positive Eastern ethics and life attitudes such as “Don’t do to others”, open arms to welcome representatives of various countries, cultures and religious backgrounds in the world to have civilized dialogues, and vow to rediscover human beings distorted by arrogance and prejudice and geopolitics Torn common human values.