Legal expert: It is difficult to see that the landlord can be assigned the debt

The police are investigating the cause of another's death after Sunday's bicycle accident in Västerås, where an elderly man died after colliding with a stationary electric scooter. At present, there are no suspects, but if the case goes to court, it could have major consequences for the future of electric scooters, says legal expert Sverker Jönsson. 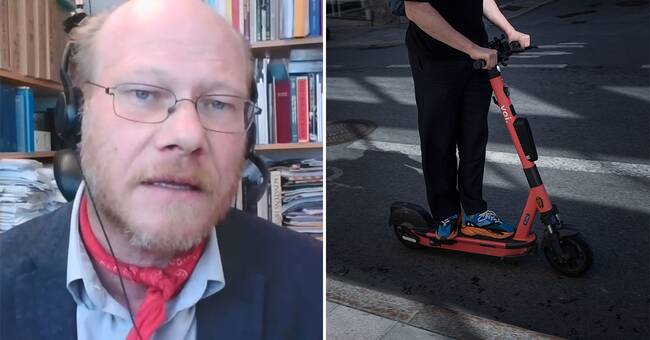 The fact that the police are investigating the accident as causing another person's death indicates that they have chosen not to regard the incident as something that happened in traffic.

That distinction is crucial when the case is to be tried in court, according to Sverker Jönsson, who is a senior lecturer in criminal law at Lund University.

- You should rather compare it with putting another obstacle on the bike path, like a boulder.

Then it is about how we should assess that action, and if you expose others to illicit risks, he says.

"Hard to say that the landlord has been careless"

The company Voi is the owner of the electric scooter.

By approving their user agreement, the user agrees to park the vehicle in "accordance with local applicable laws".

Such letters do not affect the legal process, according to Jönsson, but even without the agreement included, he finds it difficult to see that the company could be charged any debt.

- It is difficult to say that they did something careless or risk-taking, also made sure that you asked the person who rents to follow the rules.

If prosecution is brought, it will probably be directed at a person who is suspected of having placed the vehicle on the bike path, according to Jönsson.

In that case, the court's task will be to determine where the line for what is criminal goes.

- Causing the death of another is based on the fact that prosecutors can argue that a person has taken a risk that we can not tolerate.

It's about trying to find an answer to how careful we need to be.

May end with indicative judgment

Since there are no specific laws on how electric scooters should be parked, a court decision in the matter could become the norm.

If the court chooses to rule, it could have consequences for the industry as a whole, according to Jönsson.

- It can be important for what conditions you get from the landlord.

Then I can imagine that there are insurance issues and the like that can be affected by such a clear marking from society.

However, the road to court is long.

At present, there are no suspects, and in order for prosecution to be brought, prosecutors need to be able to prove that the accused is parked in an incorrect manner.

It can be difficult, Jönsson thinks.

- The person who rented the bike last could claim that someone else moved it.

There is an investigation problem here, but then I do not know at all what it looks like with witnesses.

After the weekend's fatal accident - the municipality starts an investigation

- Electric scooters are here to stay and therefore it is now a matter of finding a system that works, both for ordinary bicycles and electric scooters, says Anna Thunell in the clip.