Use: train derailed, the latest precedents

The last in order of time in 2016. An Amtrak train broke off at 160 km per hour, killing 2 maintenance workers 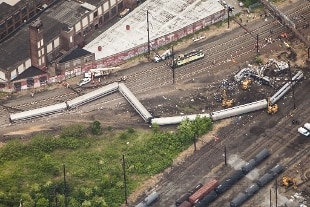 September 26, 2021 The last train accident with eight deaths among people on board a train, in the USA, dates back to just over six years ago.

These are the most recent incidents.

The Amtrak 188 train was traveling at double the speed limit of 50 miles per hour, about 80 kilometers per hour, when it entered a sharp bend in Philadelphia and derailed.

Eight people were killed and more than 200 injured.

The engine and four of the seven passenger carriages rolled off the tracks.

: A passenger train from Vermont to the capital Washington derailed after hitting rocks that had fallen onto the tracks from a ledge. The locomotive and a passenger car overturned in an embankment, derailing three other cars and injuring seven people.

An Amtrak train traveling from Los Angeles to Chicago off the tracks in southwestern Kansas, with five cars derailed, injuring at least 32 people. Investigators determined that the cause of the accident was that a livestock feed delivery truck damaged the track by displacing it about half a meter before the train passed.

: Two maintenance workers overwhelmed and killed by an Amtrak train going at more than 100 miles per hour, or 160 km per hour in Chester, Pennsylvania.