On Sunday, the Kremlin released new photographs of President Vladimir Putin's holiday, which he spent with Russian Defense Minister Sergei Shoigu in Siberia. 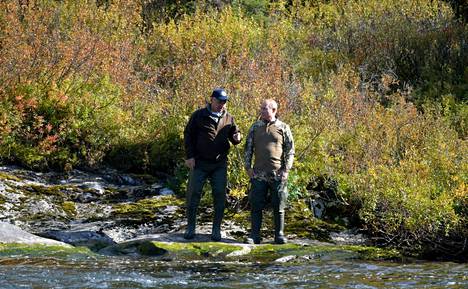 Russian President Vladimir Putin has once again been on holiday in the Siberian taiga, but this is only now being made public.

Medvedev was not recently seen even at the United Russia election victory celebrations, as he was reported to be suffering from a “severe cough”.

(Below is a recent video of Putin's vacation in Siberia.)

According to Russian media, Putin had planned a few days of vacation after he had first gone on a business trip on 1-4.

September in the Russian Far East.

Putin's exact place of rest has not been revealed, but most obviously it was the Sayan-Shushensky Nature Reserve, as the leader of the reserve, Gennady Kiselev, was also part of Putin's party.

The Kremlin only said that the holiday took place in the Siberian Federal District.

The photographs published by the Kremlin show the untouched nature, autumn and water of Siberia, as well as Putin in the middle of everything, among other things, watching the views with binoculars and presenting his fish catch.

Sergei Shoigu and Vladimir Putin fished together on their Siberian vacation.

The videos show Putin standing deep in a heavily flowing rapids and Shoigu fishing from a cliff on the shore.

Images have also been cropped for the videos, in which Putin is steering the boat and sitting at the wheel of an SUV.

Putin and his entourage walk in the forest terrain with the help of long wooden sticks.

Putin and Shoigun are said to have spent the night on their way to the tent.

The videos show pictures of Putin sitting in a tent in the darkness of the evening and a campfire burning nearby, with which Putin is also lingering.

Putin describes in a video released in connection with this story that his entourage almost collided almost literally with a herd of great marbles that had suddenly appeared in front of their car.

The situation had come to the fore so quickly that there are no pictures of the animals.

Marals are large deer and one of their names in Finnish is the great goat.

They are also called elk or noble deer.

- They were huge morals.

I have never seen one before.

Good thing they didn't come on us.

It was close that they didn't hit us.

Came at such a tremendous pace, Putin explained.

Putin also joked that big deer jumped such jumps that it would be worthwhile for them to go to the Olympics.

Putin has vacationed in the Siberian taiga with Shoigu before.

The last time the duo published camping photos of similar types of landscapes was in March 2021.