In the Canaries, a major volcanic eruption that remains under control

Off the coast of Morocco, in the Spanish Canary Islands, the volcano on the island of La Palma continues to erupt and went into an explosive phase on Saturday. If scientists recall the bus ... 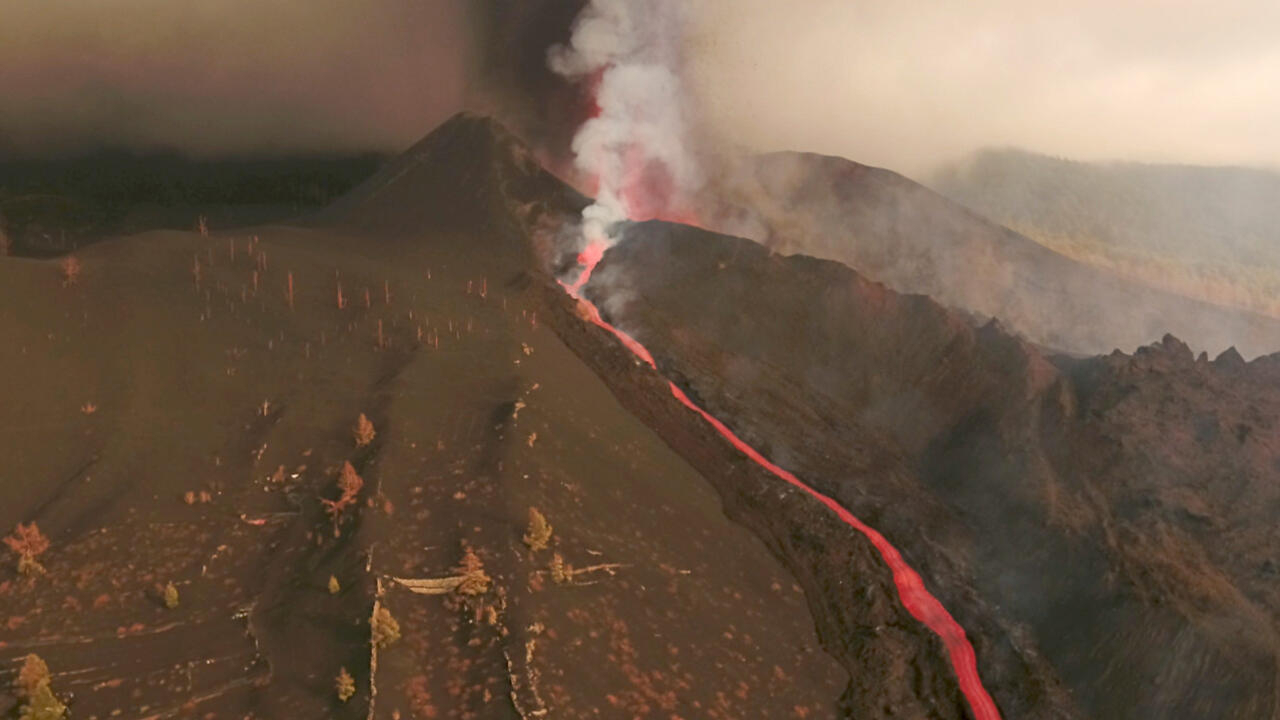 After the gray of its ashes, Cumbre Vieja repaints the sky with the red of its lava.

The volcano of La Palma, an island in the Spanish Canary archipelago, which has erupted for a week, entered a new explosive phase on Saturday, September 25.

Jets of lava escaped and exploded in the air, while an unprecedented level of activity was recorded by experts and emergency services.

Since the start of its eruption, the volcano has emitted thousands of tons of lava, destroyed hundreds of homes and forced the evacuation of nearly 6,000 people.

On Sunday, the amplitude of the volcanic tremor (earthquake caused by the rise of magma during a volcanic eruption) "considerably decreased in all the stations of the seismic network of the Canary Islands in La Palma", indicates on Twitter the Volcanological Institute of Canary Islands (INVOLCAN).

However, "this does not mean that the eruption is coming to an end," adds the institute in another tweet.

"More data and parameters are being used to make predictions about the medium and long term course of eruptive activity."

Moreover, although the director of the Pevolcan (Canary Islands Volcanic Emergency Plan), Miguel Angel Morcuende, reminds AFP that this is an eruption "typical of the Canary Islands", its evolution remains unpredictable and its consequences on the coasts and neighboring countries are duly monitored.

Eruptive phases, toxic gases, risks of megatsunami and clouds of gas rising above France ... France 24 takes stock of the eruption of Cumbre Vieja.

View of the town of Los Llanos de Aridane, on the island of La Palma, in the Canary Islands, September 25, 2021. © Désirée Martin, AFP

After a fifty-year rest period, Cumbre Vieja erupted on September 19. The mountain, a volcanic fissure forming part of the stratovolcano (volcano with explosive volcanism) constituting the island of La Palma, is experiencing mainly effusive eruptions. Nevertheless, explosive episodes - as has been the case since Saturday - also occur frequently, making it a "red volcano" (as opposed to gray volcanoes, which emit lava viscous enough so that they do not form. no lava flow). As such, the lavas of Cumbre Vieja form fountains and flows of varying lengths, sometimes progressing at several kilometers per hour. Last Sunday, INVOLCAN estimated the temperature of the lava at around 1,075 ° C and measured its speed ofadvanced towards the coast at 700 meters per hour.

On Saturday, the volcano's cone collapsed in one of the explosions, releasing a torrent of glowing magma that tumbled down the slope.

The airspace was closed due to lack of visibility and thousands of people fled the island by ferries, the number and frequency of which had to be increased to meet demand.

La Palma airport reopened on Sunday, but flights are still canceled due to lava jets and column of smoke spewed out by the volcano.

The presence of an institute such as INVOLCAN on the archipelago is not by chance and was even essential as the volcanic activity is monitored there.

That of Cumbre Vieja is particularly so, and seismic swarms (succession of earthquakes occurring in a limited area) had already been detected in 2017, 2018, five in 2020 and three in 2021.

The most recent was reported on September 11.

In just a few days, thousands of tremors under the volcano had been recorded, at a depth of between 8 and 13 km.

It is this rise of magma in the earth's crust that made it possible to anticipate and initiate an emergency plan in order to evacuate the populations.

According to the European Copernicus geospatial measurement system, the lava flow covers an area of ​​190 hectares and destroyed 420 buildings, including many homes.

But while the eruption is still in progress, it is also the arrival of lava in the ocean that is feared.

According to the United States Institute for Geological Studies (USGS), a US government agency dedicated to earth sciences, by entering water (which is 50 times cooler than lava), the lava can cause "a violent bubbling which could be followed by an explosive rain of molten splashes over a wide area".

In addition, the meeting of lava and sea water can produce a toxic mixture.

This is notably what Patrick Allard, a volcanologist at the Institut de physique du Globe in Paris, explained to AFP.

Whether for inhabitants, animals or crops, the issue of gas diffusion and toxicity has already been addressed.

"Significant amounts of CO2, sulfur dioxide, hydrogen sulfide and hydrogen halides can be emitted by volcanoes," the USGS explains, adding that these are "all potentially dangerous."

On Sunday, gas measurements from the plume of the Cumbre Vieja eruption were underway, according to the INVOLCAN institute.

The risk of a tsunami is often mentioned when the volcanic eruption concerns an underwater volcano, coastline or volcanic islands. These are indeed likely to cause megatsunamis which, unlike tsunamis, are not submarine earthquakes but are caused by a rock slide (or a landslide) which, falling into the water , cause powerful waves.

These volcanoes and volcanic islands are, in general, particularly watched because they constitute unstable structures aggregated by successive eruptions. Also, in the case of Cumbre Vieja, the risk of a megatsunami has already been mentioned, and this is not new. Twenty years ago, two geophysicists had indeed affirmed, in an article published in Geophysical Research Letters, that the instability of the western flank of the volcano made probable the occurrence of a megatsunami capable of causing damage as far as the American continent.

INVOLCAN however denied this hypothesis in 2017, explaining that "for the flank of Cumbre Vieja to meet conditions close to instability, a very strong magnitude earthquake would have to occur simultaneously with an eruption, with a high explosiveness index. ".

The next day, the cloud was already present in the south of France, but in low concentration.

On Saturday, a new map of S02 emissions was published by Copernicus, on which France is almost entirely covered by the cloud arriving from La Palma.

This is what the program had already predicted, estimating that S02 clouds would be more present over France between Friday 24 and Monday 27 September.

Sulfur dioxide, present in the list of air pollutants on the website of the Ministry of Ecological Transition, "causes irritation of the mucous membranes, skin and respiratory tract (cough, respiratory discomfort, asthmatic disorders). In addition, it "promotes acid rain and degrades the stone".

According to the Canary Islands Volcanological Institute, between 6,000 and 11,500 tonnes of S02 are spat into the atmosphere daily by the volcano.

While an episode of rains and thunderstorms is expected in France on Sunday, Météo France wanted to be reassuring about the quality of the air.

"According to simulations (from Météo France and Ineris on the path of the sulfur dioxide emitted by the volcano), the S02 would remain at altitude".

Thus, concludes the national meteorological service, "the concentrations predicted at ground level would not be particularly affected by the volcanic eruption".