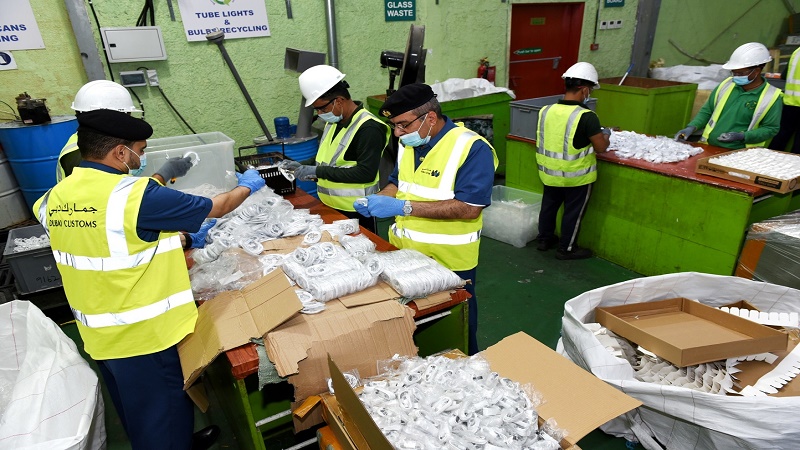 As part of Dubai Customs’ support for protecting the intellectual property rights of companies that own trademarks and in support of protecting the environment in the United Arab Emirates, Dubai Customs has recycled about 113,000 pieces of counterfeit goods that were seized in customs centers, with an estimated value of 750,000 dirhams, where the goods included different types of (bags, clothes, phones, headphones, and women's cosmetics), and those goods will be converted after being recycled into materials usable in other fields.

The recycling operations came in the presence of representatives from diplomatic bodies and consulates of the United States of America, Germany, Korea, the United Kingdom, and France, with the participation of inspection officers from the Cargo Village Customs Center, Jebel Ali and the Intellectual Property Dispute Resolution Department. The recycling operations were completed over 4 consecutive days and continued during the period from 12 to 15 September 2021.

Yousef Uzair Mubarak, Director of the Intellectual Property Rights Protection Department at Dubai Customs, said: We are working in the department to reduce illegal trade and address attempts to smuggle counterfeit goods through customs ports in the emirate, in cooperation with various competent authorities, with the aim of achieving a balance between the rights of consumers, traders and trademarks. In support of a secure competitive economic climate that supports the development of the economic sectors in the Emirate of Dubai, referring to the efforts of Dubai Customs and its response to attempts to smuggle counterfeit goods and preventing their entry into the country through its various customs centers in order to avoid environmental, health and economic damages, in support of environmental sustainability through recycling operations for counterfeit goods.

The Director of the Intellectual Property Rights Protection Department stated that the recycling operations were carried out in the presence of representatives of trademark owners, to confirm that the department is working to support the rights of trademark owners in all ways in order to provide them with a safe investment environment, which contributes to attracting investments from outside the country.

Youssef Uzair Mubarak pointed out that the recycled counterfeit goods will be converted into materials that can be used in several areas, thus avoiding our society the dangers caused by counterfeit goods and the environmental damage caused by destroying them using traditional methods that are harmful to the environment, as they are recycled in factories dedicated to this.