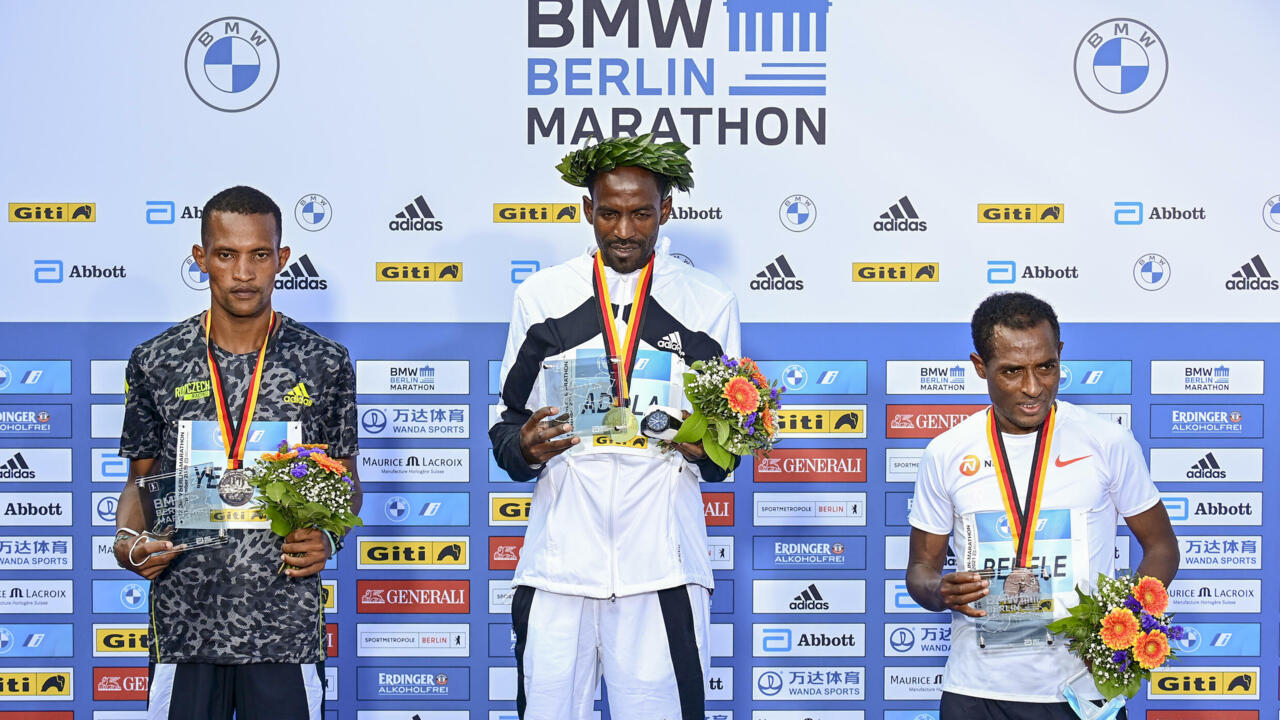 Ethiopian Guye Adola won the Berlin Marathon on Sunday in an average time of 2 h 05 min 45 sec, ahead of the unexpected Kenyan Bethwel Yegon and the big favorite Kenenisa Bekele, beaten by a good minute.

Gotytom Gebreslase gave Ethiopia a brace by winning the ladies' race in 2h 20:09.

In perfect weather conditions, the first men's half-marathon was run on very high bases, Bekele having announced at 39 years old his intention to tackle the world record of Eliud Kipchoge (2h 01 min 39 sec), absent this year.

But no runner could keep pace in the last 20 kilometers.

"The race started very quickly, we were at semi in sixty minutes (1h00: 48 NDLR), and then it was very difficult to keep up with this pace," said Adola, 30, at the finish line, "but I thought before the race that I could beat Kenenisa ".

On this ultra-fast course of the German capital, where the world record has already been broken seven times in the 21st century, Bekele, who had given up in extremis to line up in London a year ago and was not at the Games from Tokyo, had asked his hares to lead a hellish train from the start.

He won the event in 2019, failing two seconds behind the record set at the same place the year before by Kipchoge.

Until about the 25th kilometer, a small group of four men raced several seconds ahead of Kipchoge's lap times at his 2018 record.

But the tempo collapsed when the last hare left the race, to the point of allowing the return of Yegon, passed to semi with 1 min 26 sec late, finally second, but who for a moment flirted with first place in a few kilometers from the finish.

The Ethiopian Gotytom Gebreslase victorious in the Berlin marathon, September 26, 2021 in front of the Brandenburg gate Tobias SCHWARZ AFP

Bekele, who understood from km 27 that he couldn't get close to the record, tried to lead a tactical race for victory, but Adola was the strongest on Sunday.

"The big problem for me was the lack of training because of the pandemic," admitted the Ethiopian, who had yet assured Friday that he was "well prepared" to tackle the world record.

"I wanted to do well but it was just impossible. It does not mean that my career is over," added the former king of the track, 39 years old and late in the marathon, however. well run still "several years" in search of a world record.

He shone there in 2017, making a sensational entry that year onto the big stage of the world marathon.

This half-marathon specialist (best time 59 min 06 sec), almost unknown to the general public at the time, then discovered in competition the 42.195 km, and had threatened to everyone's surprise the great Eliud Kipchoge, whom he was ahead of. still a few strides at kilometer 40.

Adola had finally finished in 2 hours 03 min and 46 sec, which is the best performance in history for a beginner over the distance.

This time has remained since his personal best.

The athlete, who has been training since 2014 in Addis Ababa in the group of Italian manager Gianni Demadonna, had again run 2h 04 min 42 sec in Valence-2019, after a poor performance in London.

Berlin was the fourth marathon of his career this year.