The seventies Fatima Brijia .. the first woman to head local councils in the West Bank

From inside the village of Al-Masara, southeast of Bethlehem in the West Bank, where she was born, Fatima Brijieh, a Palestinian woman of Yemeni origin, leads the affairs of nine villages and towns in Bethlehem, and meets the needs of their residents. Since last August, she chairs the Joint Services Council for this 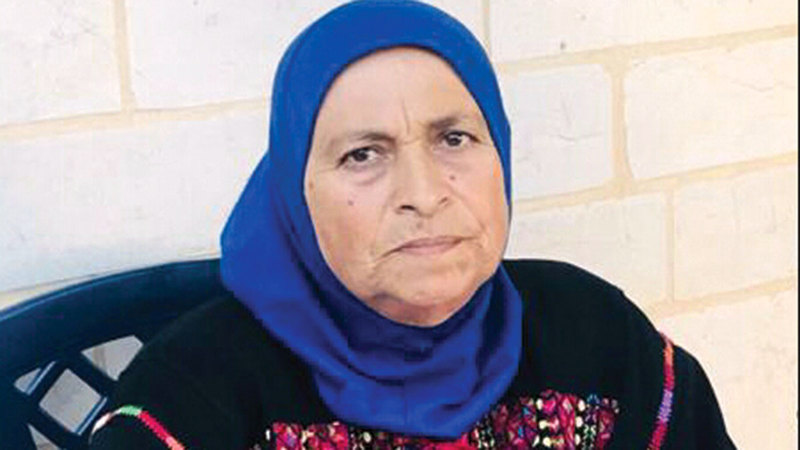 The Palestinian Yemeni is a farmer, mother of a martyr and a prisoner

The seventies Fatima Brijia .. the first woman to head local councils in the West Bank

From inside the village of Al-Masara, southeast of Bethlehem in the West Bank, where she was born, Fatima Brijieh, a Palestinian woman of Yemeni origin, leads the affairs of nine villages and towns in Bethlehem, and meets the needs of their residents. Since last August, she chairs the Joint Services Council For these Palestinian areas, by a decision of the Palestinian Minister of Local Government.

Thus, she is the only and first woman to head this position in the West Bank, since the joint local councils were established by the Ministry of Local Government nearly 25 years ago in the city of Al-Quds Al-Sharif, the Gaza Strip, and the cities of the occupied West Bank.

Four years ago, Hajja Fatima Brijieh was elected president of Al-Masara village council, south of Bethlehem, in the recent elections for municipal councils, due to her dedication to work.

Fatima Brijia, nicknamed Umm Hassan, her father is of Yemeni origin and nationality from Amran Governorate in Yemen. He had come to Palestine in 1936 for jihad against the British Mandate, and remained stuck there after its occupation. He married her Palestinian mother from the Brijiah family, to have five sons, five daughters, and one of them. The need for Fatima Brijia.

Umm Hassan married in Palestine, lived in the Palestinian village of Al-Masara, which is one of the most important rural areas in the West Bank, and gave birth to a daughter and five sons, to plant the love of the homeland Palestine in their hearts all, just as their Yemeni grandfather was, who was martyred in defense of the Palestinian land.

In the service of the land and the people

"Emirates Today" met Mrs. Umm Hassan Brijia, who has a permanent smile, inside the Maasara village council, wearing an embroidered Palestinian peasant dress, as she was carrying out tasks to provide for the needs of thousands of residents in nine villages and towns, while she closely supervised the work of the employees in the Joint Services Council, to upgrade The level and volume of services provided to the Palestinians.

The head of Al-Masara Village Council and the Joint Services Council says: “I have been fulfilling my duty towards the residents of Al-Masara and the neighboring Palestinian villages and towns for more than 30 years, the last of which was through my election to the presidency of the village council in the village of Al-Masara, and then the confidence that the Palestinian Minister of Local Government gave me, to take the position. The new in the Joint Services Council in the villages and towns of Bethlehem.

She adds that "this position earned her honor and pride, to provide more efforts and services to the Palestinian population in all aspects of their daily lives, and to provide everything they need in various vital fields."

In addition to her position as head of local councils, Umm Hassan Brijieh stands out as a Palestinian women's activist, who has many visits and tours in confronting the occupation's plans to steal Palestinian land and confiscate it.

“Following the path of my father, the martyr Ali Al-Yamani, I strive to fulfill my role as a woman fighter in the face of the occupier, so I advance to the first ranks to participate in the peaceful protest demonstrations against the settlement and confiscation schemes in the village of Al-Masara, the villages and towns of Bethlehem and the cities of the West Bank, and I am not afraid of being shot by settlers. And the arrest of the occupation forces, but I went strong to defend the land of Palestine,” says Umm Hassan Brijieh.

The Palestinian-Yemeni continues, saying: "With all the energy and ability that God gave me, I work as a feminist activist in order to preserve the land of the Palestinians and protect it from confiscation of settlement annexation schemes. I also do my best to serve the residents of Al-Masara village and all the neighboring villages in the Bethlehem Governorate."

Brijia indicates that she has worked in various positions within local centers and associations, in addition to working in the Al-Masara village council, pointing out that the most prominent issues that she participated in defending supported women's rights, advocated for prisoners and families of martyrs, and participated in popular activities to protect Palestinian lands from looting and annexation. .

What Umm Hassan instilled in her children of love for the homeland and defending the Palestinian lands, was the fruit of the harvest. Since 2005, he has served a 16-year prison sentence behind the bars of an Israeli jailer.

Her two sons, Hassan and Muhammad, are among the most prominent members of the Committee to Combat the Wall and Settlements in the Bethlehem Governorate.

The Palestinian-Yemeni woman says: "My father, may God have mercy on him, inherited the love of jihad and struggle, clinging to the land and defending it, and as a natural product, I inherited this love for my children to continue the path of struggle and struggle."

After performing her duties in the councils of the press and joint services, Umm Hassan heads to her land to plow and irrigate it, and to take care of her agricultural crops. The Palestinians know it in the village of Al-Masara and the towns of Bethlehem.

The Palestinian-Yemeni woman says: "Since I was very young, my hands were mixed with the soil of the earth. I plowed it and planted its agricultural crops, so that my family and the residents of my village could eat its goodness, and the fruits of the journey of giving and giving that I embarked on for decades."

Umm Hassan Brijieh continues by saying: “At the same time, I am in my land permanently to protect it from the ambitions of settlement expansion, to follow the approach of my father, who inherited the love and protection of the land, how not when he came from Sana’a to Palestine on the back of a camel, in defense of the land of Canaan.”

• Fatima Brijieh, nicknamed “Umm Hassan.” Her father is of Yemeni origin from Amran Governorate in Yemen. He came to Palestine in 1936 for jihad against the British Mandate, and remained stuck there after its occupation, and married her Palestinian mother.

Fatima Brijieh worked in various positions within local centers and associations, in addition to working in the Ma’sara village council, supporting women’s rights, advocating for prisoners and families of martyrs, and participating in popular activities to protect Palestinian lands from looting and annexation.