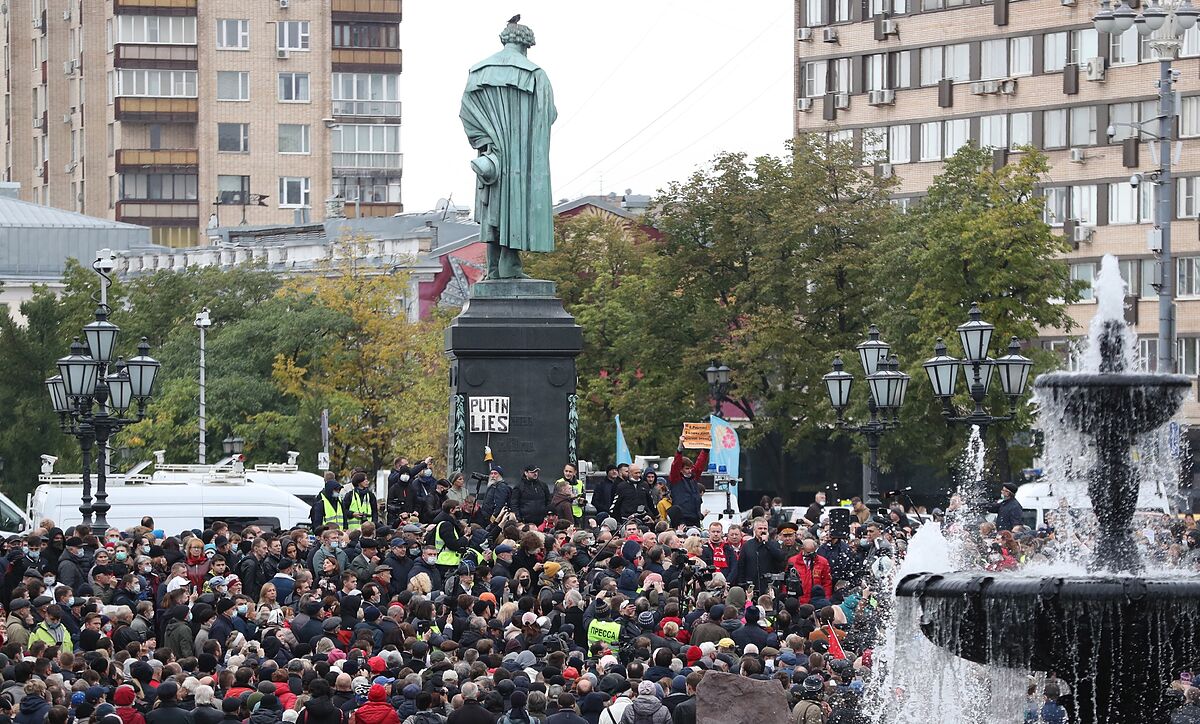 Forecasts promised rain and red flags around the

in central Moscow. The Communist Party of Russia, the "loyal opposition" that has endorsed the democracy shaped by Vladimir Putin for years, took to the streets on Saturday to denounce the

in the legislative elections a week ago. Almost a thousand people protested under a gray sky despite the restrictions due to the threat of Covid. Megaphone at the ready, a policeman snaking through the crowd repeating wearily: "Keep your social distance!" and

"this demonstration has not been authorized!"

The Russian communists of the KPRF refuse to recognize the counting of the votes 'online' cast in Moscow. Party leader

denounces that before the announcement of 'electronic votes' in single-member constituencies, six KPRF candidates were winning in Moscow, but then lost leadership after digital votes were added.

The old 'Bolsheviks' have decided to go on the offensive, making noise in the streets before winter falls, burying the desire to protest of an electoral base that does not stand out for its youth. But this time the authorities, used to dealing with the young dissidents of

, they decided to innovate by answering the noise with more noise. A police van was placed at the beginning of the square and four powerful loudspeakers played loud

music while speeches lasted on

the other side of the monument.

, secretary of the Communist Party in Moscow, struggled to impose himself on decibels:

"United Russia has stolen our seats

"Whoever steals votes is a criminal," the communist deputy

. From the tenth row it was difficult to hear what they were saying because of the persistent 'mousetrap music' that came from the north of the square. Among the 'hits' that sounded, the most booed moment was when the police played the song

'Uncle Vova [short for Vladimir] we are with you'.

"I wonder who made the 'playlist', if someone from the Security Council or the police itself", joked Alexei, about 50 years old, who protected himself with a cap of the ten degrees with which he spent that thunderous Saturday after-dinner .

The final results of the elections were released on Friday and give the ruling United Russia party, which backs the president,

. Communists, habitual 'second-men' since the fall of the Soviet Union, hoped to get closer to the ruling party and at least strip it of its 'constitutional majority', but they only got 19% of the vote.

One day before the demonstration,

about 60 people were arrested

, including deputies to the Moscow City Assembly and candidates for the State Duma. A second recount of the electronic votes will be ready by Monday. But the Kremlin wants electronic voting to be extended to the entire country in future votes.

There were not only communists in the crowd.

the younger ones shouted. The old, tended more to listen. At least what the 'police music' let them hear. Fed up after a decibel hour of Russian pop, several retirees began milling around the van, protected by several fences and five officers. The scene was reminiscent of the siege suffered by any DJ at a wedding starting at one in the morning. But the accusations were more serious:

"You are not ashamed!

" A woman yelled at the agents, recorded by several teenagers to denounce the police boycott on TikTok.

While the elders were dispersing, some young people shouted

next to the same Pushkin statue.

Erected in the 19th century, the monument was reopened by the Soviets in 1937, who placed its verses on the pedestal: "(...) for awakening the sleeping good feelings / because in my cruel century I sang to freedom / because I begged for mercy for all the fallen. "

Thus they 'forgave' his aristocratic character.

Just like this Saturday, no communist ever called Navalny a "servant of Wall Street."

The trench of protest in Moscow is bringing together old acquaintances, but 'Putinism' has songs left for a while.

Russia Communists on the rise and? Puppet? Parties

in a Russian election that does not promise changes