Telecom giant Huawei's CFO Meng Wanzhou has been released from Canada after three years under house arrest, following a settlement with the United States. At the same time, China is said to have released two imprisoned Canadians. 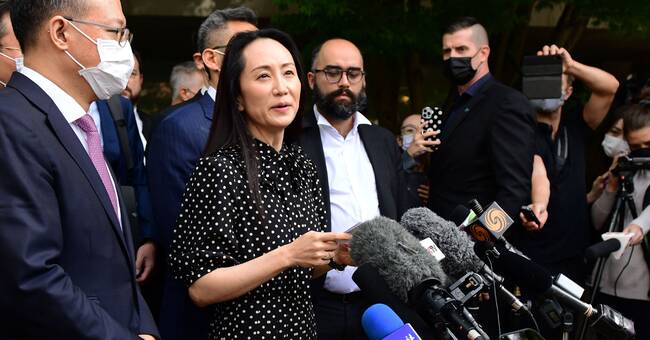 A long-standing crisis between the United States and Canada, on the one hand, and China, on the other, seems to be approaching a solution.

Huawei's chief financial officer Meng Wanzhou - who has been in custody in Canada since December 2018 - has been released and boarded a flight to Shenzhen, China.

Shortly after that announcement, Canadian Prime Minister Justin Trudeau announced that China, in turn, has released two Canadian citizens who have been detained in China.

- Michael Kovrig and Michael Spavor have left Chinese airspace and are on their way home, Trudeau said in a short comment to journalists during the night towards Saturday, Swedish time.

Kovrig, a former diplomat, and businessman Spavor were arrested in China in 2018, just days after Huawei boss Meng Wanzhou was detained in Canada.

Meng was arrested after the United States announced an arrest warrant with accusations that she had violated sanctions - crimes that could result in 30 years in prison.

In China, Spavor was sentenced in August this year to eleven years in prison for espionage, while Kovrig's case was never decided.

Trudeau's government has called China's actions "hostage diplomacy" and accused the country of using people as a means of pressure in a game of negotiation.

China has consistently denied that this is the case.

Settlement with the United States

That Meng, who is the daughter of Huawei's founder Ren Zhengfei, was released is due to a settlement with the United States that was concluded on Friday.

Following a hearing between the US Department of Justice and Meng, who himself participated via video link, in a federal court in New York, it was decided that Meng will not be tried and that the most serious charges will be put on hold until December 1, 2022. If she keeps her side of the deal the accusations - which Beijing has called politically motivated - are withdrawn.

The Justice Department states that Meng has admitted that she misled a bank about the company's business in Iran, a country the United States has harsh sanctions against.

The deal will only apply to Meng and the allegations against Huawei as a company remain.