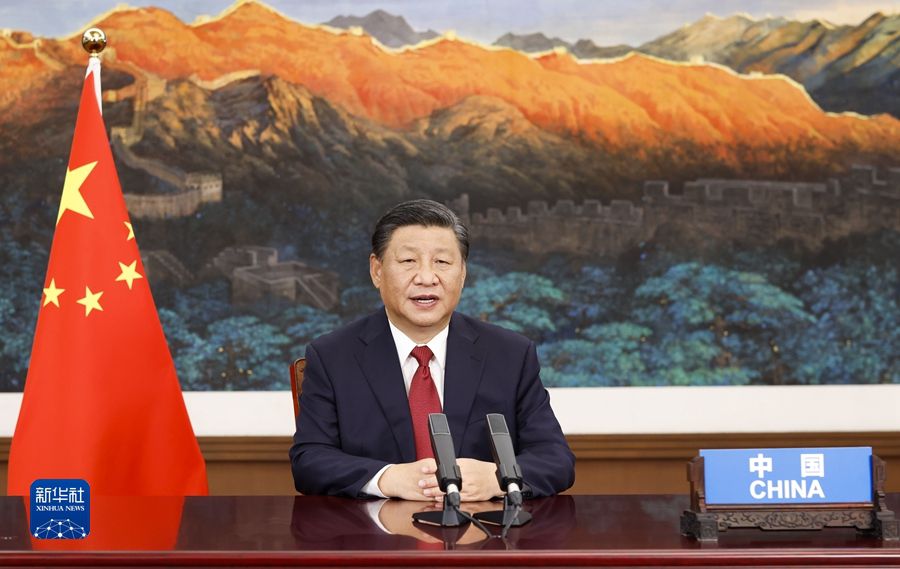 [While learning is in progress] China has always been a staunch supporter of multilateralism.

Xinhua News Agency’s "Learning in Progress" original brand column "Lectures" today launched an article for you to sort out.

"We must improve global governance and practice true multilateralism."

On September 21, Xi Jinping attended the general debate of the 76th UN General Assembly in a video mode and delivered an important speech, again mentioning "true multilateralism", which attracted great attention from the international community.

Since the beginning of this year, "true multilateralism" has become a frequent word on Xi Jinping's diplomatic occasions.

In September alone, Xi Jinping attended the 21st Meeting of the Council of Heads of State of the SCO Member States, the 13th Meeting of the Leaders of the BRICS, the Opening Ceremony of the Sixth Eastern Economic Forum Plenary Session, and the meeting with Italian Prime Minister Della Della This important concept was emphasized on multilateral and bilateral occasions such as Jitong Telephone.

Xi Jinping's proposal of "true multilateralism" is closely related to the current background of human society.

In attending the general debate of the UN General Assembly this time, Xi Jinping pointed out that over the past year, major changes in the world unseen in a century have been intertwined with the global pandemic of the new crown pneumonia epidemic.

People of all countries have more ardent expectations for peaceful development, a stronger call for fairness and justice, and a firmer pursuit of win-win cooperation.

Multilateralism is everyone's business. Everyone discusses and promotes together. Everyone formulates and abides by everyone's rules.

The rules formulated by one or several countries cannot be imposed on others, nor can individual countries start from the so-called "power status" to "bring rhythm" to the entire world.

However, there are always some forces in the world who pretend to be very upright but hide deeply. On the surface, they vowed to talk about multilateralism, but what they do is to piece together small circles and engage in ideological confrontation.

What is meant by face-to-face, behind-the-scenes, verbal, and deeds, in the name of multilateralism, and the reality of unilateralism. After seeing what they have done, it is clear!

Not long ago, Xi Jinping said at the 21st meeting of the Council of Heads of State of the SCO Member States, "For a while, strength depends on strength, and success depends on reason."

To resolve international issues, we cannot proceed from the so-called "power status" and promote hegemony, hegemony, and bullying. We should follow the purposes and principles of the UN Charter, adhere to the principle of extensive consultation, joint contribution and shared benefits, and oppose the use of the so-called "rules" to undermine the international community. Acts of order, confrontation and division.

In attending the general debate of the UN General Assembly this time, Xi Jinping further pointed out that there is only one system in the world, and that is the international system with the United Nations as its core.

There is only one set of rules, which are the basic norms of international relations based on the purposes and principles of the UN Charter.

Xi Jinping emphasized "true multilateralism", and the ultimate goal is to take the road of solidarity and cooperation.

He said with sincerity that there are inevitably differences and contradictions between countries, but dialogue and cooperation should be carried out on the basis of equality and mutual respect.

The success of one country does not mean that another country will inevitably fail. This world is fully tolerant of the common growth and progress of all countries.

Diversity is the basic feature of the world and the charm of human civilization.

The essence of multilateralism is to respect diversity.

All countries have their own unique history and culture, and they all need to take a development path that suits their national conditions. At the same time, they all need equal rights, equal opportunities, and equal rules.

Separating the world by ideology, engaging in any form of "new cold war" and ideological confrontation, runs counter to the spirit of multilateralism. It cannot solve domestic problems, nor can it cope with the common challenges faced by mankind.

Xi Jinping has a very profound saying: A peaceful and developing world should carry different forms of civilization and must be compatible with diverse paths to modernization.

Democracy is not the patent of any country, but the right of the people of all countries.

The recent developments in the international situation have once again proved that external military intervention and so-called democratic transformation are infinitely harmful.

We must vigorously promote the common values ​​of peace, development, fairness, justice, democracy, and freedom for all mankind, and abandon small circles and zero-sum games.

What the Chinese nation inherits and pursues is the concept of peace, harmony and harmony.

We did not in the past, and we will not invade or bully others in the future, nor will we be kings and hegemons.

Xi Jinping also mentioned a major event in this speech: This year marks the 50th anniversary of the restoration of the People's Republic of China in the United Nations, and China will solemnly commemorate this historic event.

Fifty years of practice has proved that China has always been a builder of world peace, a contributor to global development, a defender of international order, and a provider of public goods.

Although there will be twists and turns in the practice of true multilateralism, there is hope that China will continue to stand firmly on the right side of history, stand on the side of human progress, and continue to provide new opportunities for the world with its own new development, and to promote it. To build a community with a shared future for mankind and build a better world to make new and greater contributions.