They mourn their dead friends: "I did not want to believe that it happened"

The day after the serious accident on road 31 where three young men lost their lives, a group of young people gathered who knew the deceased to light candles and mourn together. - It was completely empty at first. I do not want to think that it happened. Then it started to sink in more and more, says Emil Nordström, who was close friends with the 18-year-old. 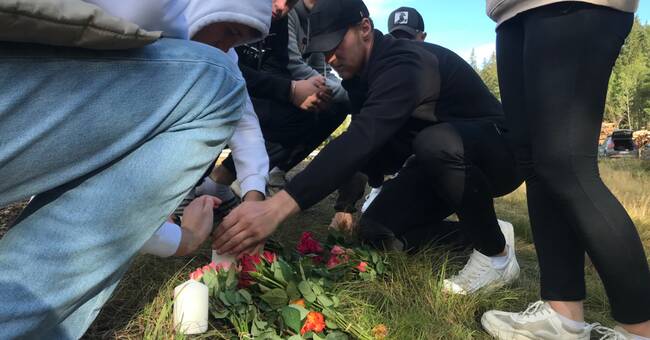 A row of red and pink roses borders the place by road 31 outside Lindshammar where three young men died after the tragic accident on Thursday.

Emil Nordström is one of several young people from Vetlanda who went to the accident site on Friday.

- They have been friends for a long time.

I have hung out with one of them more or less every day.

It's tough, he says.

There were four teenagers who traveled in a small car and were on their way to Kalmar to watch the football match between AIK and Kalmar.

After a overtaking just before a sharp curve, the car drove into a road barrier and then bounced out onto the oncoming lane and collided head-on with a larger car, according to the police.

A 16-year-old and a 17-year-old died on the spot and another third person, the 18-year-old driver, died in hospital on Friday morning.

The fourth young man has survived with minor injuries, as has the driver of the oncoming car.

I was told that the guy who was in the hospital died this morning.

It was the closest of them and when I found out it was completely empty at first.

I did not want to believe that it had happened.

Then it started to sink in more and more and it gets harder and harder, says Emil Nordström.

In Vetlanda, the municipality has activated its POSOM group, which provides crisis support in the event of difficult events, and during Friday afternoon, Vetlanda Mission Church is open for mourners to gather.