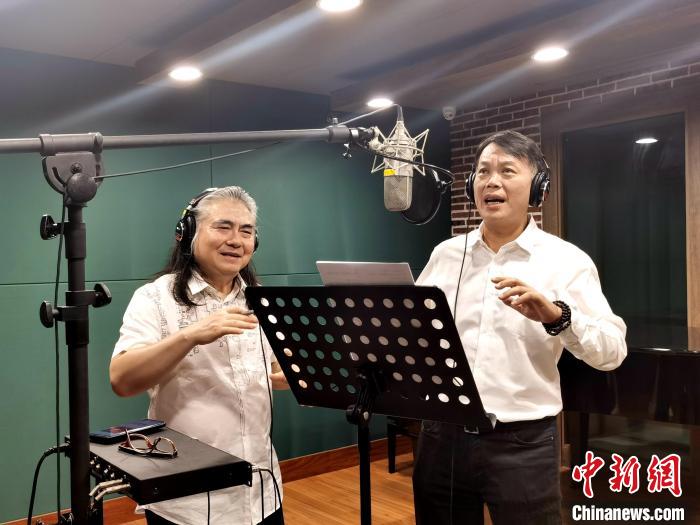 China News Service, Xiamen, September 24 (Reporter Yang Fushan) "Let love form a circle, let love be a circle...", jointly produced by Southeast.com and the Xiamen Taiwanese Business Association, to fight the epidemic with one heart. The anti-epidemic song MV (music short film) "Let Love Build a Circle" with the theme of "Love" was launched on the 23rd, giving Fujian people who are participating in the fight against the epidemic immediately feel warmth and strength.

Facing the sudden new round of the new crown pneumonia epidemic, the compatriots on both sides of the strait in Xiamen are watching and helping each other. Everyone is using their own way to encourage the fight against the epidemic.

The songwriter Liang Xiaolei, a member of the Fujian Youth Federation, said on the 23rd that in the interview, many Taiwanese, Taiwanese businessmen, and Taiwanese youths living in Xiamen, the "first home", were spontaneously participating in the prevention and control of the epidemic. Taiwanese-funded companies in charge of nucleic acid testing, Taiwanese doctors who participated in the fight against the epidemic, Taiwanese youths who initiated volunteer teams, and Taiwanese businessmen friends who are willing to donate and donate. They stand at the forefront of the war against the epidemic together with their counterparts in the mainland. The compatriots faced up to the wind and rain together to fight the epidemic.

"In fact, it is not just this wave of the Xiamen epidemic, but the Taiwan compatriots who have watched and helped each other in the past two years of epidemic prevention have been beautiful scenery everywhere, so I wrote the pictures in my mind into the lyrics." She said.

The song is divided into three parts, respectively showing three different aspects of compatriots on both sides of the strait in fighting the epidemic.

"Reagents are falling bit by bit, and time passes by every minute..." The vivid laboratory scene reminds Taiwanese businessman Li Minghui of the drips in the laboratory these days.

Li Minghui told reporters that during this period of time, the amount of laboratory testing was very large, and it was running around the clock almost 24 hours a day, replacing people to perform testing work without stopping, hoping to present the test results as soon as possible.

"From the front-end sampling, to the transfer of the samples, to the final test results, they are all racing against the virus."

"This time I really feel the efforts made by family members on both sides of the strait to defeat the virus." Fan Jiangfeng said, just like the lyrics sang "scan the codes one by one, one meter by one meter apart", the Taiqing people practiced by themselves. Participating in voluntary service reflects the determination of compatriots on both sides of the strait to fight the epidemic together.

"Love donation day by day, nucleic acid testing in one district and one district" is a common portrayal of Wu Jiaying, chairman of the Xiamen Taiwanese Business Association, and countless compatriots on both sides of the strait who are fighting on the front line.

Participating in the recording of the song, he told reporters that he hopes to bring comfort and strength to the prevention and control of the epidemic through singing, and together "rain and clear the sky and welcome a better tomorrow."

According to the song’s main creative team, it only took them five days to complete the writing, arranging, and recording work of the song, from designing the structure to completing the creation.

"We went for nucleic acid testing and saw the staff working hard under the scorching sun. It was very distressing." Chen Jianping said, so when he received the first version of the lyrics, he immediately started production with Guo Zhiyi, a well-known Taiwanese producer.

Chen Jianping said that singing can give people healing.

We hope to do our best in the shortest time and give the most beautiful praise and warmest greetings to people who fight the epidemic.

For this reason, I didn't sleep well for a few days, and immediately communicated with the team whenever I had an idea.

As the composer and producer of "Let Love Build a Circle", Guo Zhiyi also gave new life to the song.

"The singer came to the studio to record and listened to the demo (sample) gently humming, I was relieved." Guo Zhiyi said that as a charity song, being catchy is very important, so he adopted popular music The lyrics are interpreted in a way that is gentle and strong, just like the compatriots on both sides of the strait in the prevention and control of this epidemic.

"In this fight against the epidemic, we have a lot of touching shots, from front-line medical staff, volunteers, participants who spare no effort to record songs in order to boost morale, etc.." Mainland China is the director of this song and music video. Documentary director Shen Xiaomin said that the full positive energy in the song should be displayed in the form of pictures, with trickling love, integrated into the background of Xiamen's victory in the epidemic prevention and control battle, and hit the heart and warm you and me.

Producer Huihan said: "Just as the lyrics sing'Let love form a circle, let love draw a circle', this is not only a song, but also a'fusion aria' linked by the hearts and hands of compatriots on both sides of the strait. "

Chen Miaomiao, the host of Southeast.com who participated in the recording, said, “The lyrics remind me of many heart-warming images I saw in frontline interviews. I hope that these positive energy will also give you more faith, courage and warmth along with this song. "(over)