L1 / incidents: 18 months stadium ban for Lensois supporters Plane (France) (AFP) A week after the excesses during the derby between Lens and Lille on Saturday in Bollaert, the Racing Club de Lens imposed heavy penalties on some of its supporters, going up to 18 months of stadium ban. "The sanctions range from 9 to 36 months of stadium ban, mixing the firm (18 months maximum) with the suspension. In some cases, these bans will be accompanied by a complain 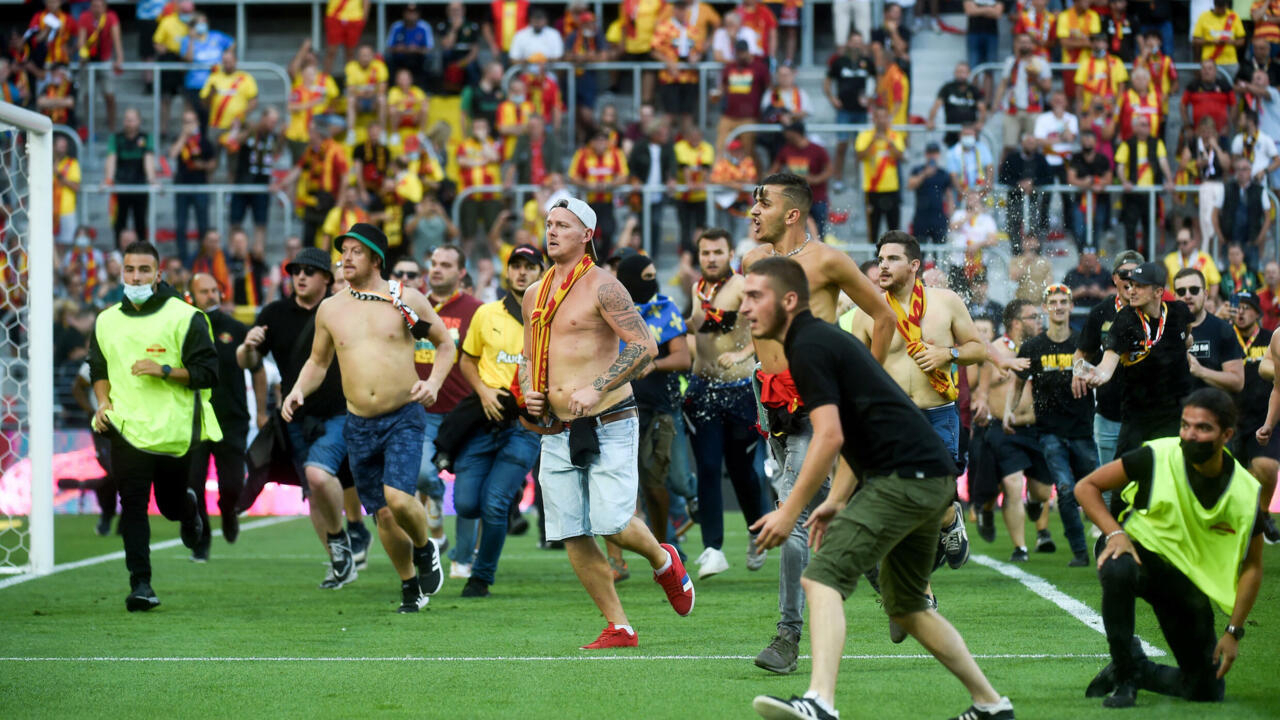 A week after the excesses during the derby between Lens and Lille on Saturday in Bollaert, the Racing Club de Lens imposed heavy penalties on some of its supporters, going up to 18 months of stadium ban.

"The sanctions range from 9 to 36 months of stadium ban, mixing the firm (18 months maximum) with the suspension. In some cases, these bans will be accompanied by a complaint if violent behavior is suspected," announced Arnaud Pouille, Director General of RCL during a press conference.

RC Lens is thus uncompromising towards its supporters who invaded the pitch at half-time in the derby against Lille, which finally won 1 to 0.

The police intervene to arrest supporters who have descended on the lawn of the Bollaert stadium, on September 18, 2021, at half-time in the match between Lens and Lille, during the 6th day of Ligue 1 FRANCOIS LO PRESTI AFP / Archives

The Lensois general manager hammered it: the sanctions decided by Racing concern "all identified people who have entered the field".

On the sidelines of Sport Unlimitech, the Minister of Sports Roxana Maracineanu welcomed "the decision of the president of Lens (...) If we need to toughen the administrative or judicial procedures, we will do it", she said underlined with AFP.

To date, 17 supporters have been identified, out of more than a hundred who left the Marek stand.

Obviously, Arnaud Pouille also vilified the parking lot of Losc, where "80 seats were torn off, fractured" and the "toilets devastated".

And he lamented "images that we had rarely seen", believing that "these facts are more of hooliganism than" supporterism ".

"The supporters accept any form of condemnation of violence. The most difficult thing was to make them understand that they did not have to enter the field in reaction to what they saw. The field is sacred. ", underlined the N.2 of the Lensois club.

Lensois supporters invade the lawn at half-time in the derby between Lens and Lille, counting for the 6th day of Ligue 1, September 18, 2021 at the Stade Bollaert-Delelis FRANCOIS LO PRESTI AFP / Archives

The economic consequences are significant for the club: 30,000 euros for repairs and 100,000 euros of investment planned to rearrange the visitors' parking lot.

"As long as we have not acted at this level, the bottom of the parking lot will be closed," he said.

To this sum is added 2 million euros of deadweight loss for the closed-door receptions of Strasbourg (0-1) and Reims (October 1), after the sanction imposed as a precaution by the disciplinary committee of the LFP , pending the investigation of the case.

The final decisions will be known on October 6.

Saturday, at half-time of the match, dozens of Lensois supporters had invaded the field to do battle with the parking lot of Lille, who had torn seats to throw them on artesian supporters.

The clashes, limited by the intervention of the CRS, left six slightly injured and two spectators were arrested.

A supporter is arrested by the CRS during the incidents that occurred during the Ligue 1 derby, Lens-Lille, September 18, 2021 at the Bollaert stadium FRANCOIS LO PRESTI AFP / Archives

One of them, a 26-year-old Lille supporter, appeared on Monday for "violence against a person holding public authority" with "weapon by destination", namely "a torn seat".

The hearing was postponed until October 18, and the man was released under judicial supervision.

At the same time, "several investigations were carried out following the events", including one "for acts of incitement to hatred and exhibition of racist or xenophobic signs", the Béthune prosecutor's office had specified on Wednesday in a message to AFP.