In response to his withdrawal of confidence from the government, a demonstration in the Libyan capital calls for the downfall of the House of Representatives

Hundreds of demonstrators gathered today in Martyrs Square in the capital, Tripoli, chanting slogans calling for the downfall of the House of Representatives and the continuation of the work of the national unity government. Prime Minister Abdel Hamid Dabaiba participated in the demonstration. 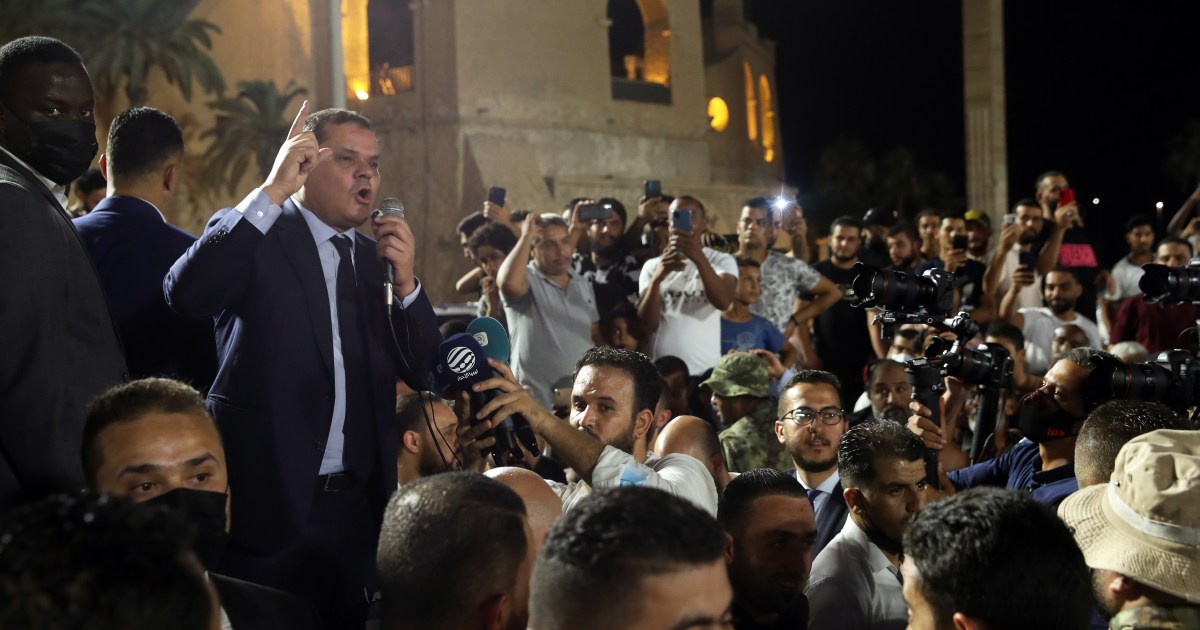 Hundreds of demonstrators gathered today in Martyrs Square in the capital, Tripoli, chanting slogans calling for the downfall of the House of Representatives after withdrawing confidence from the government. The demonstrators stressed the continuation of the work of the national unity government, and Prime Minister Abdel Hamid Dabaiba participated in the demonstration.

The demonstrators in Tripoli raised slogans emphasizing the necessity of building, and reactivating the constitutional department of the Supreme Court, on a Friday they called, the Friday of the Parliament's overthrow.

Anadolu Agency reported that the city of Misurata also witnessed a demonstration today to express support for the national unity government, and to demand the overthrow of the House of Representatives, and the need to hold elections on time.

The Prime Minister of the National Unity Government called last Tuesday in front of a crowd of citizens to come out in Martyrs' Square and express their opinion on withdrawing confidence from his government, after the House of Representatives in Tobruk announced last Tuesday the withdrawal of confidence from the government with 89 votes out of 113.

The Supreme Council of State in Libya described the parliament’s decision as invalid for violating the constitutional declaration and the political agreement, while the UN mission in Libya, commenting on the parliament’s announcement, said that the Dabaiba government remains with it legitimacy, until its replacement through a regular process following the elections.

Speakers at today's demonstration in Tripoli stressed their keenness to ensure that Libya remains one, and that its societies will not allow division.

Dabaiba said that the slogan of the stage is "No to war and yes to development, unity and peace," and that the national unity government project is devoted to life, not death, referring to what he called the unification of the parliament institution after its fragmentation in the past.

Al-Dabaiba added that the municipalities now have all the powers in order to reduce the severity of centralization.

On the other hand, the House of Representatives issued a decision to form a 13-member parliamentary committee to prepare a proposed draft law on parliamentary elections to be held on December 24.

The decision of the House of Representatives called on members of Parliament to submit their proposals and observations regarding the draft law to the committee formed for study and the possibility of including them in the draft law.

Tensions between the ruling institutions in Libya have recently resurfaced, as a result of disputes between the House of Representatives on the one hand, and the Supreme Council of State, the unity government and the Presidential Council on the other, especially over powers and electoral bills.

These tensions threaten the political detente that Libya has been witnessing for months, as an elected transitional authority, comprising a unity government and a presidential council, assumed on March 16 its duties to lead the country to parliamentary and presidential elections next December.