"Discovered with no signs of life": the death toll on Elbrus climbers rose to five

On Mount Elbrus, five people were killed, who were part of a group of climbers who had asked for help the day before due to worsening weather conditions. At the same time, the Ministry of Health of the Kabardino-Balkarian Republic added that during the search and rescue operations, 14 climbers were found, they were handed over to doctors. As noted in the Ministry of Emergency Situations, the rescuers worked in the most difficult conditions - heavy rainfall in the form of wet snow, wind gusts up to 70 m / s, air temperatures down to -20 ° C and visibility no more than one meter. 11 people were hospitalized in the Nalchik hospital with injuries of varying severity, one of them was sent to intensive care with a fracture of the shin bones. 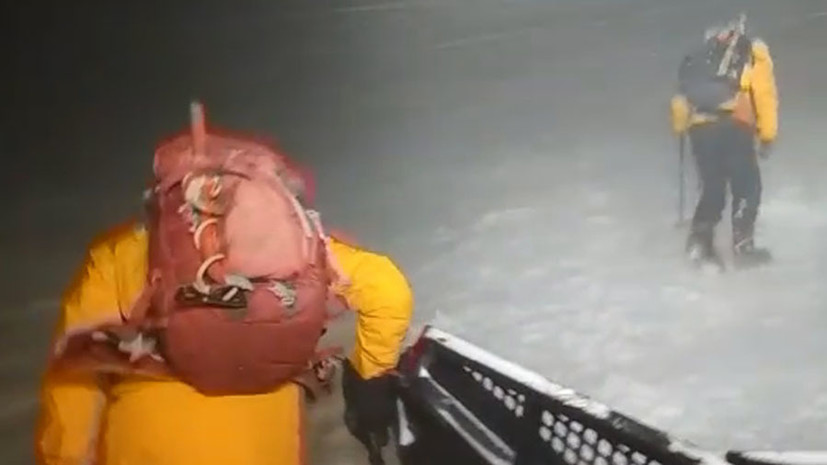 The death toll of climbers on Elbrus from the group that requested the help of rescuers has reached five.

This was reported to TASS by the head of the main department of the Ministry of Emergency Situations of the Russian Federation for Kabardino-Balkaria, Mikhail Nadezhin.

Earlier it was reported about three deaths.

“Unfortunately, five people were found with no signs of life,” he said.

Two people died, whose whereabouts were reported to rescuers by other members of the group.

“The rescuers had a great hope that they would be able to save two people, <...> but, unfortunately, by the time of their arrival, they showed no signs of life.

At the Gara-Bashi station at an altitude of 3,900 m, disaster medicine doctors pronounced death, "added Nadyozhin.

As indicated earlier, the Investigation Department of the Investigative Committee of the Russian Federation for the Kabardino-Balkarian Republic initiated a pre-investigation check into the death of participants in the ascent to Elbrus.

At the same time, during the search and rescue operations, it was possible to find and transfer 14 people to disaster medicine doctors and an ambulance station.

“Of these, 11 were taken to the Republican Clinical Hospital of the city of Nalchik.

Three people refused hospitalization, ”explained the head of the main department of the RF Ministry of Emergency Situations in Kabardino-Balkaria.

According to him, at 02:45 am, search and rescue operations to rescue a group of 19 tourists on Mount Elbrus were completed.

In total, the search and evacuation of the climbers took more than seven hours.

“The rescuers worked in the most difficult conditions.

Visibility is no more than one meter.

Searches were carried out at an altitude of 5000 meters and higher in the area where the group was located.

In total, 69 people, 16 pieces of equipment were involved in the work, ”the republican Ministry of Emergency Situations said in a statement.

At the same time, Asker Bilimikhov, the surgeon in charge of the Republican Clinical Hospital of the city of Nalchik, said that 11 people were admitted to the medical facility with complaints of fever, hypothermia, hypoxia and shock.

“11 people with varying degrees of severity were delivered to the admission department of the republican hospital.

Eight people are in the burn department, one is in intensive care with a fractured shin bones, "Izvestia quotes him.

As reported by the head of the Elbrus high-mountain search and rescue squad (EVPSO) EMERCOM Abdullah Guliyev, a group of climbers from all over Russia (from St. Petersburg, Yakutia, Tyumen, Chelyabinsk, Moscow, Yekaterinburg, Togliatti and Novorossiysk) originally consisted of 23 people, but on the mountain 19 people went.

As pointed out by a TASS source, all members of the group are not professionals, they took part in the ascent as amateurs.

According to the Ministry of Emergency Situations, at an altitude of 5,400 meters, climbers requested assistance due to worsening weather conditions.

This request was received by the Crisis Management Center of the Main Directorate of the Ministry of Emergency Situations for the KBR at 17:10.

Also on russian.rt.com "Three people died": what is known about the incident with Russian climbers on Elbrus

Meanwhile, the organizer of the ascent, Denis Alimov, said that the group consisted of four professional climbers, they accompanied 16 participants.

“At 10 am they reached the plateau - this is above the saddle of Elbrus.

There was a strong wind, but the weather was stable, there were no delays.

A decision was made - one of the assistants (guides -

) together with her begin the descent to the saddle in order to drop the height.

The rest of the group went to the top, ”TASS quotes him.

The guide who went down with the girl told him about further events.

“According to him, literally in half an hour the weather worsened sharply, the wind began to blow from the bottom up, and a storm began.

Perhaps the pressure dropped sharply, because the girl became worse even with the loss of height.

She lost consciousness and died within an hour in the arms of the guide.

The guide fixed her near the trail, waited for the group until 15:00, and when the group did not descend, he contacted the camp and began descending on his own.

As soon as he got into the snowcat, he started calling the Ministry of Emergencies, ”Alimov added.

In addition, he reported that one of the group members broke his leg - this was the "fatal cause" of the subsequent tragedy.

“Probably because of this, the group lost time, the weather deteriorated catastrophically.

I spoke with the leader of the group, who was taken to the hospital - he said that when during the descent it was necessary to re-attach the railing (the rope for the descent), the visibility was about half a meter.

They decided to divide the group into three platoons - those who go faster and those who are slower.

As we descended, two more people died in one of the groups.

But the decision to split up was correct, otherwise there could have been more victims, ”the organizer explained.

The guides accompanying the climbers received severe frostbite and injuries: "One of them was practically blind."