The silence lasted only a moment, then it collapsed - the resigning Angela Merkel has solved all the crises of this century

The resigning German Chancellor Angela Merkel has resolved all the crises of this century. They define his legacy. 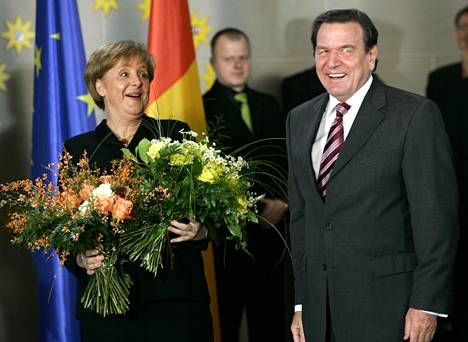 The calm lasted only a few years.

Angela Merkel became German Chancellor in the fall of 2005, when Europe and the rest of the world were still celebrating a steady start to the new millennium.

Falled in the autumn of 2008, as a result of the financial crisis, national economies threatened to collapse and the eurozone to collapse.

Since then, the crises have followed one another: Ukraine, the wave of refugees, the Brexes, the Korona…

Crises have defined him perhaps more than any other head of state, due in part to his long reign.

His success in his work is a matter of taste, but one thing almost everyone agrees on.

- I think his most important legacy is simply that in the midst of all the global crises, he provided stability, summed up Merkel's biographer, German journalist Ralph Bollman for the news agency AP.

- Ongoing crises were a really existential threat and they called into question the whole world order.

His merit was to lead Germany, Europe and, to some extent, the world through everything, though one can always also criticize the details.

Merkel's success is at least indicated by the fact that the length of her reign is close to that of German Chancellor Helmut Kohl (1982-1998).

Merkel, 67, has a chance to break Kohl’s record if government negotiations after Germany’s Sunday election drag on, and she will be chancellor as early as December 17th.

Perhaps a more significant measure of Merkel is that she is the first German Chancellor to retire on her own terms, not by force.

However, Merkel does not avoid criticism in the aftermath of her career.

- If the euro fails, Europe will fail.

Merkel's words at the height of the euro crisis triggered by the financial crisis at the end of 2009 illustrated the seriousness of the situation.

Southern European countries, led by Greece, had lived beyond their means, and the debt crisis threatened not only to overthrow states and the banks that lent them, but also to crumble the European single currency.

The leaders of Germany, France and Italy negotiated to deal with the financial crisis in Paris in 2008. The Prime Minister of Italy, Silvio Berlusconi, whispered in the ear of President Nicolas Sarkozy.

Merkel's solution was to support countries in crisis, but at a high price when they had to agree to drastic austerity measures.

Merkel has never bragged about her own accomplishments, but recently specifically named saving the euro as her key achievement.

However, according to many experts, a gap has opened up between southern and northern Europe that has not narrowed.

Read more: “Merkel diamond” and jackets in all colors - see a series of photos from the career of the retiring German Chancellor

- It is true that it was he who managed to keep the eurozone together, commented Yanis Varoufakis, a former Greek finance minister interviewed by the BBC.

- But I have a big disagreement about the policy after that.

He never had a vision of the eurozone after he saved it, and the way he did it was only deepening the dividing lines in both Germany and Greece.

Merkel at her CDU party meeting in Karlsruhe in 2010. Photo: Kai Pfaffenbach

Merkel's motives have been considered in part to be purely national.

By rescuing the euro, he saved above all German banks, the savings of their own citizens and the country's export industry.

At the same time as the euro crisis in the east, Russia led by Vladimir Putin began to rage.

The confrontation escalated in 2014 to the conquest of Crimea and the war in eastern Ukraine, which Merkel mediated by denouncing the Minsk ceasefire agreement with Putin.

It ended the open war, although it has not brought peace since.

Merkel’s drug for inciting Russia has been a strict sanctions policy, but again, at the same time, she has also pursued a national interest in promoting the controversial Nordstream 2 gas pipeline from Russia.

Merkel traveled in May 2015 to meet Vladimir Putin in Moscow.

It has even been suspected to be the biggest geopolitical challenge for the Europe of the future if Russia starts tightening the gas screw for some reason.

Read more: Editorial: Completion of Nord Stream 2 is a big win for Angela Merkel, but the gas pipeline could still tarnish her political legacy

With regard to Putin, however, Merkel has always preferred to maintain a dialogue rather than breaking the gap.

This has often been accused of being too permissive a policy.

At the duo’s famous encounter, Putin introduced his free-moving black Labrador retriever to Merkel, who is known to be afraid of dogs.

Merkel also knows how to click, as she did, for example, by meeting Alexei Navalny, an opposition leader who was flown to Germany after the poisoning.

Authoritarian leaders are a phenomenon of the Merkel era anyway.

They have also appeared inside Merkel's nose inside the EU.

Critics say Merkel should have pushed Germany's economic interests into the background for once and done more.

- During his watch, the authoritarian goals of Viktor Orban of Hungary and Jaroslav Kaczynski of Poland were allowed to grow to form a systemic challenge for the EU, wrote Daniel Hegedüs, a researcher at the German Marshall Fund, in the Politico.

Perhaps Merkel's most controversial act was the statement at the beginning of the refugee crisis triggered by the Syrian war: "We will survive this."

It was interpreted as an invitation to Germany, and the 2015 wave of migrants soon shook the whole of Europe.

Praise came especially from behind the Atlantic, as it was early to see that Merkel was risking her entire political career at the same time.

The migrant took a selfie when Merkel visited a reception center in Berlin in September 2015. Photo: Fabrizio Bensch

- He is on the right side of history, President Barack Obama said at the time, according to the Washington Post.

The refugee crisis also led to a turmoil in German politics as the right-wing Alternative to Germany party began to grow.

The EU's previous asylum principles crumbled and have not yet been reassembled.

Merkel and Obama discussed at the G7 meeting in Garmisch-Partenkirchen in 2015. Photo: POOL New

Eventually, Merkel negotiated an agreement with Turkey to keep refugees out of Europe.

However, the solution restored stability.

The year 2016 brought Brexit to Europe and Donald Trump to the United States - and suddenly Merkel also won the title of Free World Leader.

The self-curled, contentious President of the United States was no longer planted in that place.

It took Merkel to calm those worried about the triumph of populism and the upheavals.

Merkel and other G7 leaders gathered around Donald Trump at a meeting in Quebec, Canada in 2018.

It has even been speculated that Merkel extended her political career in 2017 to act as a counterweight to the turmoil.

He strongly defended the multilateral treaty system as well as transatlantic cooperation from Trump’s attacks.

Merkel posed along with host Boris Johnson at the G7 meeting in Cornwall in June.

Merkel’s background as a naturalist ensured that Korona-Germany raised experts to its advantage to decide on security measures.

Germany was one of the least affected in the early days of the corona crisis.

Merkel's biggest turning point in the latter part of the season is also related to the corona crisis.

When the countries of southern Europe in particular were in the grip of the crisis, he, together with France's Emmanuel Macron, presented the EU's recovery fund, a de facto common debt to help others.

It was a complete turn for Merkel, not only in the principle of EU funding, but also in Germany's age-old policy of a precise euro.

- He proved that he could decide things against the typical German thinking and did so for better integration and European efficiency, praised the recovery fund's architect, French Finance Minister Bruno Le Maire to the BBC.

One crisis Merkel has not been able to solve enough, according to critics, even though it knocks on the door.

The economy has driven the climate past Merkel’s papers.

Germany remains a major coal producer, although Merkel has embarked on a transition to renewable energy sources.

The need for coal is compounded by the fact that after the 2011 Fukushima nuclear accident, Merkel also accelerated the abandonment of nuclear power.

The climate crisis has the potential to tarnish Merkel’s reputation long after her term because she didn’t do enough in time.

Read more: Angela Merkel, who grew up in the GDR, became the most influential woman in the world

When asked, Merkel herself emphasized that others should evaluate her success and legacy.

In 2019, however, at the end of his visit to Stralsund, he was asked what he should read in school textbooks after 50 years.

Merkel thanked the audience for Harvard’s honorary doctorate in the United States in 2019. Photo: Brian Snyder