"Intra-parliamentary exercises": how Moscow reacted to the proposal of the US Congress to introduce new sanctions against the Russian Federation

In the Russian Federation, a document approved by a committee of the US House of Representatives was called an intra-parliamentary exercise, which recommends considering the introduction of sanctions against 35 Russian politicians, businessmen and media representatives. This was stated by the press secretary of the President of Russia Dmitry Peskov. According to him, in the Congress "there are a huge number of people who are poorly versed in the Russian reality, but at the same time they fiercely do not like our country." In addition to personal restrictions, the congressmen propose to introduce restrictions against Nord Stream 2 and the state debt of the Russian Federation. The Foreign Ministry, in turn, noted that Moscow would like to once again warn Washington against a rash step on the "sanctions track". According to experts, the initiatives of American politicians are just another episode of pressure on Russia.However, Moscow has long been ready for such attacks from the United States, analysts add. 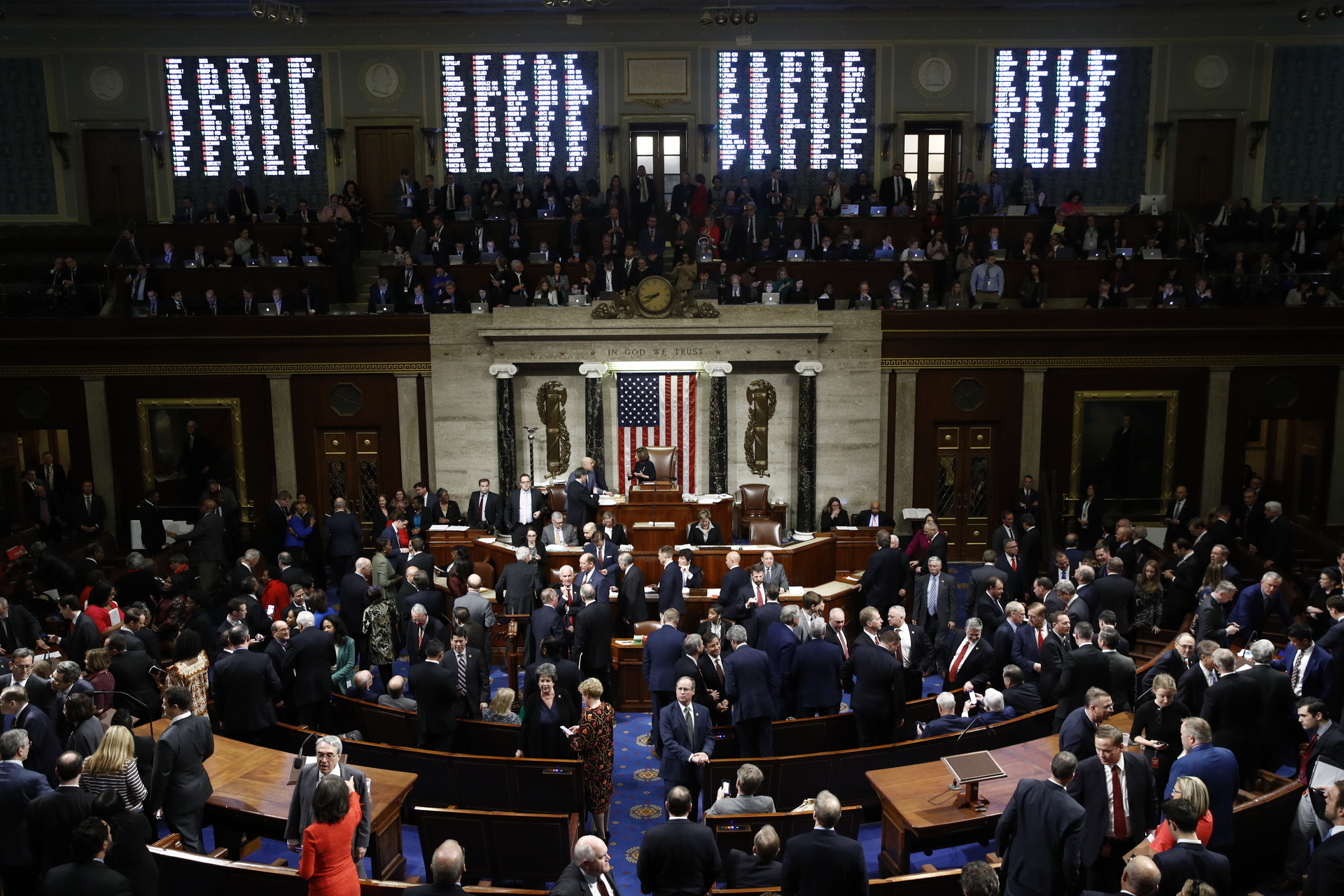 The amendment to the US defense budget for fiscal 2022, approved by a committee of the House of Representatives and recommending considering the introduction of sanctions against 35 Russians, is nothing more than "intra-parliamentary exercises."

This was stated by the press secretary of the President of Russia Dmitry Peskov.

“Firstly, these are such internal parliamentary exercises, in order for them to be somehow formalized and even more activated, they have to go a very long way.

The fact that there are a huge number of people in the Congress in various commissions who are poorly versed in Russian reality, but at the same time do not like our country fiercely, is not a secret for anyone, ”Peskov told reporters.

Earlier, members of the US House of Representatives Rules Committee approved an amendment to the defense budget for the next fiscal year, which recommends the White House administration to consider the possibility of restrictions on Russian politicians, businessmen and media representatives.

“No later than 180 days after the effective date of this law, the President must submit to the appropriate congressional committees, including a detailed justification, whether any person listed in subsection b) meets the criteria for imposing sanctions under section 1263 b) of the Global Magnitsky Act, ”reads the text of the amendment.

The editor-in-chief of RT, Margarita Simonyan, also appears in the document.

Without sanctions in our time, a decent person is somehow even indecent.

Moreover, such a great company.

I invite my colleagues to celebrate this international recognition of services to the Motherland together, ”Simonyan said in a conversation with RIA Novosti.

The Russian Foreign Ministry also reacted to the next sanctions initiative of Washington.

“Apparently, everything that is now happening in Washington is a consequence of an acute“ staff shortage ”, primarily in the part concerning specialists in our country.

Only people who have no idea of ​​Russian realities could compile such a list of persons in relation to a topic to which none of them has and cannot have either direct or indirect relation, "- said in the commentary of the official representative of the department Maria Zakharova.

According to her, Moscow would like to once again warn Washington against a rash step on the "sanctions track".

Note that in order for the document to come into force, it must be approved by both houses of Congress and signed by the President of the United States.

As stated by the congressman and member of the US Helsinki Commission Paul Massaro, the list includes people who are allegedly involved in "human rights violations."

“House Rules Committee APPROVED an amendment to the Caucus National Defense Bill to Fight Corruption and Kleptocracy Abroad, proposed by Congressmen Tom Malinowski and John Curtis and aimed at forcing the administration to assess the possibility of imposing sanctions against all 35 human rights violators and kleptocrats from Navalny's list and reveal the name of each of them.

And that's not all! ”He wrote on his Twitter page.

NEW: @ KleptoCaucus @ RepMalinowski @ RepJohnCurtis national defense bill amendment forcing admin to evaluate all Navalny 35 human rights abusers and kleptocrats for sanctions - and naming every one of them - has been APPROVED by Rules Committee.

And that's not all!

Subsequently, on September 23, Paul Massaro also said that, in addition to personal sanctions against Russian politicians, businessmen and media representatives, congressmen proposed to impose sanctions against the Nord Stream 2 gas pipeline, as well as a ban on the purchase and sale of Russian public debt by US citizens.

Incredible! ”, - he wrote on his Twitter, having published the relevant documents.

Just when you thought this counter-kleptocracy national defense bill couldn't get any stronger, @ RepMcCaul @ RepMarcyKaptur bill to sanction Nord Stream 2 and repeal waiver authority is added as is @BradSherman bill to sanction Russian debt in secondary markets.

In particular, the amendment concerning the gas pipeline states that no later than 15 days after the date of entry into force of the relevant law, the US President must impose sanctions against “any organization responsible for planning, construction or operation of the Nord Stream pipeline - 2 "or a successor organization", as well as "any other corporate officer or majority shareholder with a controlling interest in the organization."

These restrictions include a ban on US visas and entry into the United States for persons associated with the project, blocking the property of these individuals and companies in the United States, and other measures.

As for the amendment on the state debt of Russia, it states that no later than 30 days after the date of entry into force of the relevant law, the head of the White House “must submit provisions prohibiting persons of the United States from buying or selling Russian sovereign debt, which will be issued or canceled after 60 days after the entry into force of this law ”.

As one of the authors of this amendment, Congressman Brad Sherman, explained, it is proposed to impose such restrictions on Moscow, allegedly because of its "interference" in the American elections in 2016, 2018 and 2020.

Recall that the Russian Federation has repeatedly emphasized that it has never interfered in the electoral processes of other states, including the United States.

Sherman said his proposed sanctions would send a "powerful signal" to markets and to Moscow that US restrictions on Russia have not yet reached their peak and that Washington is prepared to act against alleged Russian attempts to undermine American democracy and divide the United States.

"Moscow will not be surprised"

"Innovations are proposed by specific congressmen who are lobbying for certain structures specializing in finance, energy and other areas," political analyst Alexander Asafov explained in a conversation with RT.

In turn, Konstantin Blokhin, a leading researcher at the Center for Security Studies of the Russian Academy of Sciences, says that all the reasons given by the authors of the amendments are just a formal reason to increase pressure on Russia.

“Neither the situation around Navalny, which the congressmen are hinting at, nor in the numerous cases about the notorious" interference "of the Russian Federation in the American elections, there is no evidence of Russia's involvement.

However, it is beneficial for American politicians to recall all these stories, once again groundlessly accuse Moscow and, under this sauce, promote their initiatives, "Blokhin said in an interview with RT.

At the same time, according to him, in the amendments, in fact, there are no fundamentally new proposals.

“Year after year, the United States is purposefully expanding the sanctions list, which includes both Russian politicians and other citizens who, in Washington’s opinion, are guilty of something.

But no one still provides evidence of this, ”the expert noted.

Blokhin called the congressmen's amendment on "Nord Stream 2" a kind of "agony" of the American establishment in connection with the completion of the project.

“Members of Congress are not in a position to do anything, they want to block the operation of the gas pipeline, but they cannot and, apparently, do not even know how to do it.

For this reason, they decided to act somehow, for example, to introduce new sanctions.

But now the point of no return has been overcome.

Despite American restrictions, the pipeline was successfully completed.

And the American congressmen will no longer be able to stop the implementation of this project, ”the analyst says.

Alexander Asafov also drew attention to the fact that the amendment concerning Nord Stream 2 is at odds with what US President Joe Biden says.

“In particular, he reported on the suspension of sanctions against the pipeline.

However, now we see the American political system of checks and balances being implemented, ”the expert said.

As for the amendment related to the state debt of Russia, its purpose, according to Asafov, is that "the Russian Federation could not attract additional funds using this market financial instrument."

According to analysts, the entire set of anti-Russian amendments to the US defense budget for fiscal 2022 is likely to be adopted and come into effect within the statutory deadlines.

“This topic is constantly present in American discourse.

But if Washington takes this step, Moscow will not be surprised, it has long been ready to continue this kind of attacks from the United States, "Blokhin said.