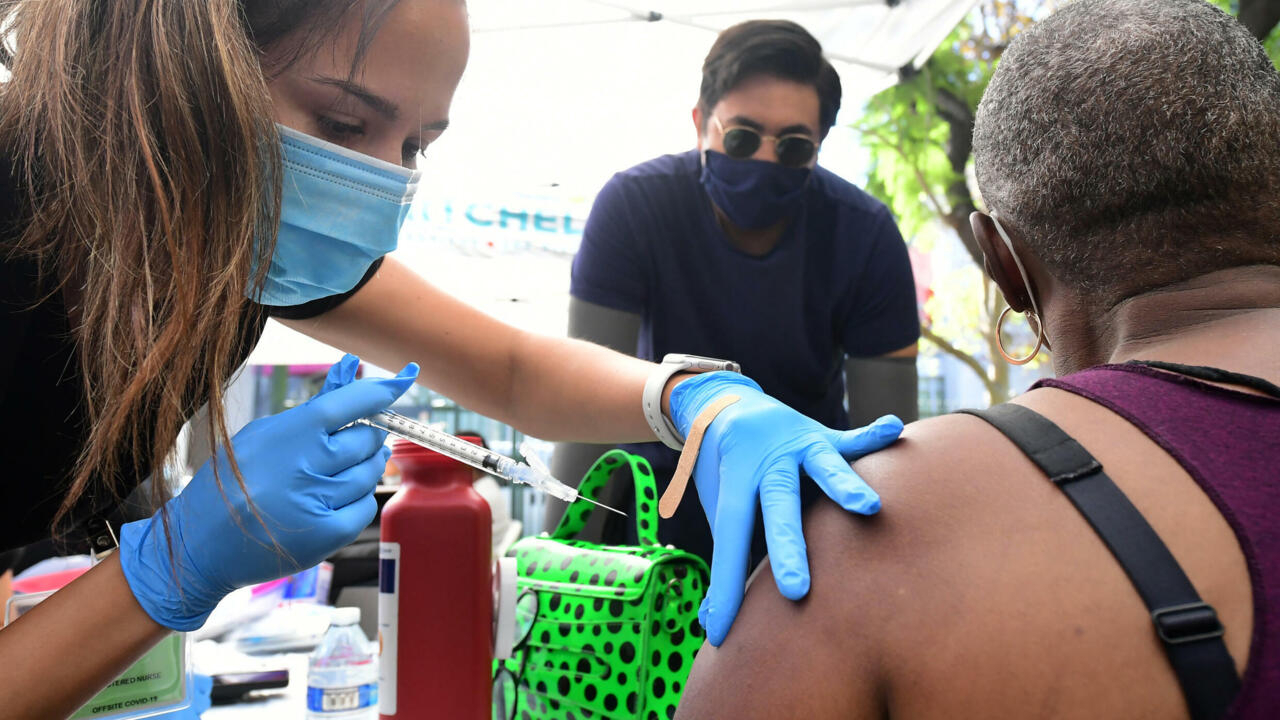 The United States on Wednesday authorized the injection of a third dose of Pfizer's anti-Covid vaccine from the age of 65 and for people at "risk", the United States Medicines Agency announced.

The booster dose can be administered from six months after the second injection.

- Washington wants to lead the global response against the pandemic -

The United States will double its donations of Covid-19 vaccines, bringing the total doses promised to poor countries to more than 1.1 billion, Joe Biden announced on Wednesday, clearly signaling his intention to lead the global response against the pandemic.

"I made the promise, and I keep it, that America will be the arsenal of vaccines for the world, just as it was the arsenal of democracy during World War II," he said. from the White House.

The United States will purchase and distribute to developing countries an additional 500 million doses of the Pfizer / BioNTech vaccine, bringing its pledges to 1.1 billion doses, taking into account previous announcements.

Pfizer and BioNTech specified that these doses, manufactured in the United States, would be distributed to 92 developing countries identified by the international Covax mechanism and to the 55 member states of the African Union.

- A positive Brazilian minister at the UN -

Jair Bolsonaro, who appeared without a mask on several occasions during the trip, was not vaccinated against Covid-19 and repeated that he would be "the last" Brazilian to receive the vaccine.

Mr Queiroga was with Mr Bolsonaro at several events, including a meeting on Monday with UK Prime Minister Boris Johnson, who was caught on camera shaking his hand.

- More than 6 billion doses of vaccine -

More than six billion doses of vaccines have been administered worldwide, according to a count made Wednesday by AFP at 09:30 GMT from official sources.

Vaccination remains very unequal: countries with "high income" according to the World Bank classification administered an average of 124 doses per 100 inhabitants, "low income" countries only 4.

Amnesty international has accused the pharmaceutical groups that produce the Covid-19 vaccines of fueling an "unprecedented human rights crisis", calling for the granting of two billion doses to poor countries.

- Cases are on the rise in Moscow -

The Russian capital is facing a further rise in cases, Moscow City Hall announced, just weeks after a deadly wave caused by the Delta variant.

The health pass is maintained for the moment in all French departments despite the decline of the epidemic which is "confirmed day after day", announced the spokesman of the government, Gabriel Attal.

The obligation to wear a mask in primary school will be lifted from October 4 in the least affected departments.

- Sri Lanka will apply for a loan from the World Bank -

Sri Lanka will seek an emergency loan of $ 100 million from the World Bank to finance its vaccination campaign.

This could be a "major advance" in the search for the origins of Covid-19: researchers at the Institut Pasteur have identified viruses similar to SARS-CoV-2 in bats in northern Laos, capable of infect humans.

The conclusions of this work, freely available on the scientific platform "Research Square", have yet to be peer reviewed for publication in a scientific journal.

- Germany: no salary for unvaccinated in quarantine -

The wages of unvaccinated people will soon no longer be covered in Germany during periods of quarantine, announced the Minister of Health.

The decision, negotiated with the German regions, will enter into force on November 1.

The pandemic caused by the new coronavirus has killed at least 4,705,691 people around the world since the end of December 2019, according to a report established by AFP from official sources on Wednesday in the middle of the day.

The World Health Organization estimates, taking into account the excess mortality directly and indirectly linked to Covid-19, that the toll of the pandemic could be two to three times higher.