Egypt hopes to regain its leadership in the foreign labor market in Libya within the framework of the recent Egyptian-Libyan understandings, as part of the reconstruction file after years of the flight of the majority of labor force due to wars. 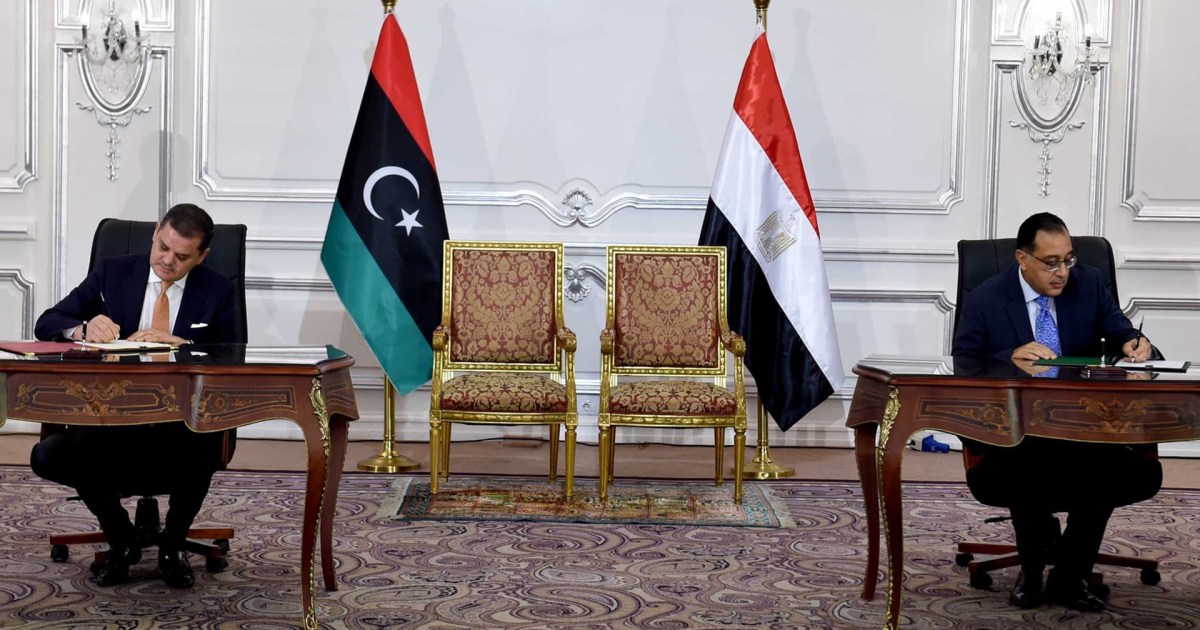 - Egypt hopes to regain its leadership in the foreign labor market in Libya within the framework of the recent Egyptian-Libyan understandings, as part of the reconstruction file, after years of fleeing the majority of labor - whether Egyptian or foreign - due to the wars there.

It seems that the Egyptian government will start the journey of one million miles with at least one million workers, according to what the Libyan Minister of Labor Ali al-Abed announced last Saturday, and they will start entering his country in early October.

"We signed contracts with Egypt worth 19 billion Libyan dinars (4.24 billion dollars), or about 66 billion Egyptian pounds," Al-Abed said, after returning from Egypt as part of a Libyan government delegation, without giving details about these projects.

The meetings of the 11th session of the Egyptian-Libyan Joint Higher Committee last Thursday, headed by the prime ministers of the two countries, resulted in the signing of 14 joint memoranda of understanding between the two sides in a number of different fields, and 6 executive contracts.

As part of the two countries' efforts to increase the pace of cooperation, the Civil Aviation Authority in Libya and Egypt agreed last Sunday to restart direct flights to Cairo International Airport by the end of September.

Egypt hopes to throw its weight in Libya, and to acquire a large share of the reconstruction "cake" in the oil- and gas-rich country that has been torn apart by internal wars since the fall of the regime of Libyan leader Colonel Muammar Gaddafi.

In a visit, the first of its kind since the revolution in Libya, Egyptian Prime Minister Mostafa Madbouly, accompanied by 11 ministers, visited Tripoli in April 2021, and announced the signing of several memoranda of understanding, including organizing the return of Egyptian workers to Libya.

Before the outbreak of the Libyan revolution in February 2011, Libya was one of the most important destinations for Egyptian labor, whether skilled or unskilled, regular and random, given the facilities that were granted to Egyptians.

According to the Egyptian Central Agency for Mobilization and Statistics (an official body), the total number of Egyptian workers in Libya in 2011 exceeded two million, but some estimates raise it to more than that.

In turn, the Egyptian Minister of Manpower, Mohamed Saafan, expected the participation of 3 million workers in the reconstruction of Libya.

Saafan explained, during a telephone interview on one of the channels, that the past ten years witnessed the return of 3 million Egyptian workers from Libya due to internal unrest there.

But according to experts and specialists who spoke to Al Jazeera Net, this return will be different from its predecessors, because it will be within the Egyptian state's plan to participate in the efforts to rebuild and develop Libya, and therefore it must be organized and monitored.

This was stressed by the Minister of Manpower in the same television intervention, not to allow any worker to leave any country without guarantees, stressing the skill of Egyptian labor, considering it the best in the world, he said.

This was also confirmed previously by the Egyptian Prime Minister during his visit to Libya, where he said in a statement to the Council of Ministers that it was agreed that this return (the return of workers) should be organized and planned in the areas requested by the Libyan side.

Hamdi Imam, Head of the Division of Employment Abroad and Employment Employment Companies at the Cairo Chamber of Commerce, expressed his optimism about the return of Egyptian workers to Libya, and said, “We hope during the coming period to be able to market skilled Egyptian workers from all sectors and activities, which will have a positive impact on the remittances of Egyptians abroad. ".

In his speech to Al-Jazeera Net, Imam expected that the return of Egyptian workers would be organized and under the supervision of the state, as is the case in the Arab Gulf countries, noting that the sectors most in demand for Egyptian labor in Libya will be the construction and infrastructure sector.

Regarding his estimates of the size of the returned labor force, he stressed that the number may reach two million workers during the first 3 years, which is less than the number that actually existed before 2011, but it was unskilled and unregistered labor.

For his part, the Secretary-General of the Union of Arab Investors, Ambassador Gamal Bayoumi, considered that the return of one million Egyptian workers to Libya comes within the framework of recovering workers there, as there were more than two million workers, and they constituted the largest percentage of foreign workers.

Regarding the impact of that return on the labor market, Bayoumi confirmed in statements to Al Jazeera Net that the market will recover after a period of stagnation due to the Corona pandemic, noting that he demands - in his meetings at the Arab League - in addition to the liberalization of trade and services and the facilitation of joint investment terms by liberalizing the movement of movement between markets. Arabia.

He pointed out that sending Egyptian workers to Libya within the state's umbrella will provide it with safety and stability, and guarantee real resources for the state by sending money through banks and official channels, especially since the remittances of Egyptian workers abroad are important.

Remittances from Egyptians abroad deviated from the general trend, and preliminary data showed that it increased during the fiscal year 2021/2020 at a rate of 13.2%, with a value of about $3.7 billion, thus achieving its highest historical level, recording about 31.4 billion.

The Central Bank of Egypt confirmed that the data showed an increase in these transfers during the period from April to June 2021 at a rate of 29.6%, to record about 8.1 billion dollars, compared to about 6.2 billion in the same period last year.