The difference between the most expensive and the cheapest transfer price can be up to three times. Over the last ten years, the inhabitants of the North have paid the toughest electricity transmission prices. A comparison compiled by Taloussanomat from the Energy Agency's statistics shows that Tornionlaakso Sähkö, Oulun Energia Sähköverkko, Muonion Sähköosuuskunta and Enontekiön Sähkö increased the transmission fees the most between August 2011 and 2021, when average prices are considered from 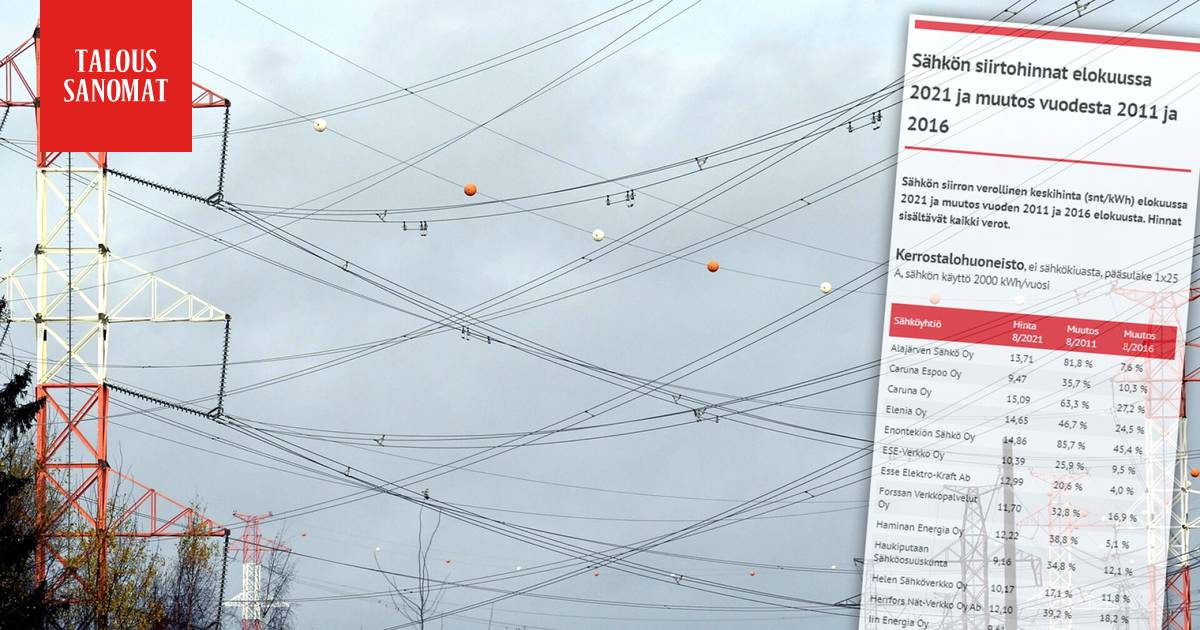 Over the last ten years, the inhabitants of the North have paid the toughest electricity transmission prices.

A comparison compiled by Taloussanomat from the Energy Agency's statistics shows that Tornionlaakso Sähkö, Oulun Energia Sähköverkko, Muonion Sähköosuuskunta and Enontekiön Sähkö increased the transmission fees the most between August 2011 and 2021, when average prices are considered from the electricity transmission bills of apartment buildings and detached houses.

At these companies, prices at least doubled.

Other northern companies are also at the forefront.

See the table after the story.

You can view current prices or conversion rates by apartment type over a period of five or 10 years by pressing the column headings.

On the other hand, the small Lankosken Sähkö, located in Siikainen, which is mainly privately owned, had an increase of only less than ten per cent.

Over the past five years, the toughest transmission fee raisers also focused on the north and Savo.

Admittedly, Electricity Network Services in the Oulu region had reduced its prices by 26 per cent and Lankosken Sähkö by 31 per cent during this period.

The largest increases in transfer prices for detached house residents have been reflected in Enontekiö Electricity's bills over the past five years.

Vetelin Energia's bills, on the other hand, fell by 14 percent at the same time.

The most expensive transmission prices, more than 20 cents per kilowatt hour, were at Loiste Energia and Järvi-Suomen Energia in August.

In Jyväskylä, on the other hand, JE-Siirto billed just over seven cents per kilowatt hour.

In small houses, the cheapest was about five cents per kilowatt hour in the areas of Kerava Energia and Valkeakoski Energia and Turku Energia Sähköverkko.

The transmission price of Enontekiö Electricity was the most expensive, ie 11 cents per kilowatt hour.

K1, ie apartment dwellers, is the group that represents the least electricity customers.

- Therefore, the increases in the basic fee in general transmission products affect its total price in proportion to those of customer groups that use more electricity, says Tiina Karppinen, the leading expert of the Energy Agency.

A five-year review shows that the ceiling control, which came into force in September 2017, has continued to bite into price increases.

The energy agency monitors the reasonableness of electricity transmission pricing.

The network operator may increase its transmission fees by a maximum of 15% compared to the fees it collected during the year preceding the increase.

Last year, the agency examined the reasonableness of pricing in 2016–2019.

If it finds companies where the amount of overpricing in the previous four-year period exceeds the so-called reasonable, it must reimburse customers in the future.

Caruna Oy, which was much on display, had increased the transfer fee for an apartment building resident by 27 per cent in five years, Elenia 25. In detached houses, their increases were 16 and 18 per cent.

The companies were among the biggest raisers, but not quite at the forefront.

The comparison gives an overview, but the charges invoiced based on the use of an individual customer always differ from the customer group-specific data.

- In addition, distribution system operators operate in different circumstances and the level of charges for network service charges differs between them.

Among other things, the customer-specific network length has a significant effect on the level of payments and the share of fixed payments in online service fees, Karppinen points out.

About a third of the price of electricity consists of transmission fees.

Read more: For a consumption of less than 3 euros, a bill of 95 euros - a coil burned from Mati from Multia when the electricity company remembered a letter

Read more: The table shows: these companies raised electricity transmission prices the most - the largest increase + 10% in just over a year

Transfer prices have plagued many consumers because they cannot be competed.

The transmission fee can be extremely high in relation to the electrical energy used by the customer, for example in a summer cottage.

For years, transmission companies have been blamed for wild increases and accused of excessive profits and overinvestment, citing security of supply objectives.

In August, a new law on the electricity market came into force, stifling increases and cutting revenues for distribution companies.

- As a result, the Agency is expected to change its control methods towards the end of the year in a way that is expected to further reduce the level of revenue.

During the preparation of the law, the agency estimates that the changes and the market development of risk-free interest rates will be the first to affect urban distribution networks.

They should reduce the price already during the current monitoring period.

The price reduction was announced by Caruna Espoo and, in addition, by Lappeenranta Energy Networks and Seiverkot in the summer.