The Seyfo monument inaugurated in Norrköping

Today, a memorial was inaugurated in Norrköping to commemorate those who died during the genocide of 1915 in the Ottoman Empire. The four Syrian Orthodox churches in Norrköping, together with the municipality's help, have been able to erect the Seyfo monument in Folkparken. - This is part of history and must not be forgotten, says Martina Timürtas, president of St. Mary's Syrian Orthodox Church. 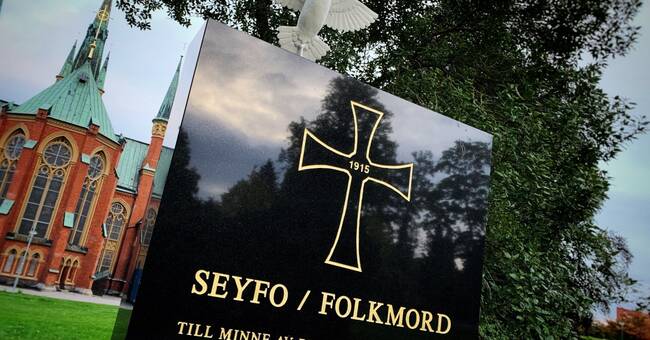 Behind the Matthew Church in Folkparken, the black granite block with gold engravings, the Seyfo monument, now stands as a memorial to the peoples who died in the genocide;

- You as a people have the right to show that we exist.

This is part of history and must not be forgotten, says Martina Timürtas, president of St. Mary Syrian Orthodox.

According to Martina Timürtas, this is the first public monument to the 1915 genocide on municipal land.

See the pictures from the inauguration ceremony of the Seyfo monument at Folketspark.

The four Syrian Orthodox churches in Norrköping have largely financed the monument and bought the land on which it is located by the municipality of Norrköping.

Ibrahim Tekmen, sits on the board of the Seyfo committee in Norrköping.

- We will honor our martyrs every year, says Ibrahim Tekmen.

- It is very important for us as people to have a monument so that our children, grandchildren can go there and remember our ancestors, Martina Timürtas explains.

⇑ In the clip above, Ibrahim Tekmen tells what dates the memorial days for each people take place.

⇓ Get a quick overview of the question in the video below.