If the Chinese real estate bubble bursts, it will be a new Lehman Brothers. All bags in red.&nbsp; 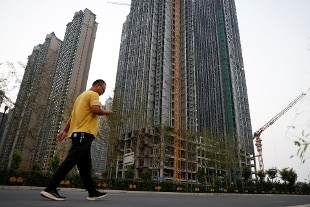 21 September 2021 The decline of the Hong Kong stock market continues for the second consecutive day due to the crisis of Evergrande, the second Chinese real estate developer which at the start of the session drops 1.32% on fears of an ever closer crack.

The Hang Seng index reports a decline of 1.15% at the opening.

Financial markets in China, South Korea and Taiwan are closed for holidays.

Yesterday Evergrande closed down 10.24% in Hong Kong, the lowest since May 2010, confirming itself under increasing pressure also in view of the expiry on Thursday when the payment of interest on offshore bonds is scheduled. A payment that, in all probability, will skip, triggering - and widespread fear - a domino effect. Evergrande's flop on the stock market forcefully brings to the fore investor fears about China's real estate market and fears that Beijing may extend its housing policies - a "good for living, not speculation" - even in Hong Kong. .

Fears that have made all financial markets sink. last night the European stock exchanges had closed all in the red, with Milan losing 2.5% weighed down by banks and oil. A thud also on Wall Street, which closes the worst session since May, confirming the caution of investors in September. The Vix index, often called the fear thermometer, has soared 34% to its highest in over four months. Even oil is not saved, with prices falling by almost 2%.

The world financial centers fear a Chinese Lehman Brothers capable of sinking the global financial system. The expected Fed meeting, which on Wednesday could announce the timing of the withdrawal of the economic stimuli put in place for the pandemic, is also unnerving the markets, and fueling a wave of generalized sales. Not even the appeal of the US Treasury Secretary Janet Yellen for an increase in the debt ceiling, no ifs and buts, does not facilitate trade: not doing so - he warned - would mean slipping into a new crisis and recession.

"Investors are repositioning themselves in anticipation of the likely default of Chinese developer Evergrande in the coming days and the wider implications this could have on the market," say some analysts. While pointing the finger at Evergrande, and observing how the fear is that it is only the tip of the iceberg of the Chinese real estate bubble, other observers believe the high volatility of Black Monday on the stock exchanges is normal after a long period of calm and in the face of valuations of the very high titles.