"We see warning signs in every continent and region, high temperatures, shocking biodiversity being lost, polluted air and water, climate-related disasters on every corner," the UN secretary general told the leaders gathered at the UN headquarters. 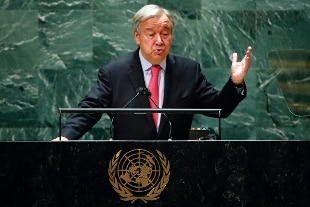 The UN secretary general, Antonio Guterres, urged to "be serious and act quickly" in the fight against climate change. "Switching to 'green' economies, sustainable 'green' jobs, ending fossil fuel subsidies, not engaging in new coal plants. This is a planetary emergency," Guterres underlined, addressing the leaders gathered for the 76th General Assembly at the UN headquarters in New York.

"We see warning signs in every continent and region, high temperatures, shocking biodiversity being lost, polluted air and water, climate-related disasters on every corner" continues Guterres, noting that the UN climate conference in Glasgow November is close, while the nations are "apparently light years away from achieving their goals".

"Scientists tell us that it is not too late to keep alive the 1.5 degree target of the Paris climate agreement - continues the UN secretary general - But the window is closing quickly". Guterres warned that "we need a 45% cut in emissions by 2030, yet a recent UN report shows that emissions will increase by 16% by 2030. This would condemn us to hell with a temperature increase of at least 2. , 7 degrees compared to pre-industrial levels ".