Police murdered in Biskopsgården in Gothenburg - this has happened

A police officer on duty was shot in Biskopsgården on Hisingen in Gothenburg on June 30 this year. He was taken by ambulance to hospital and later died of his injuries. In the video you get a summary of the case - in 60 seconds. 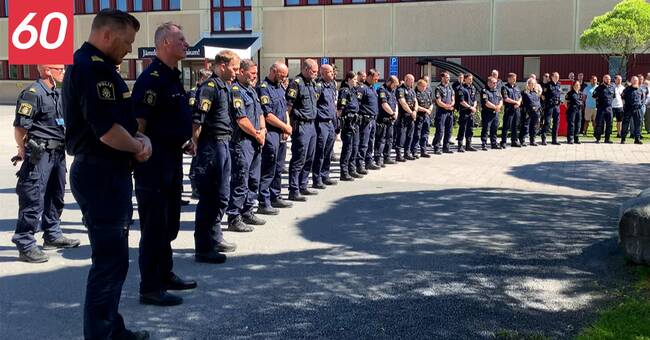 • The municipal board decides to appoint an accident commission to investigate why the City of Gothenburg has not done more to stop young people from ending up in criminal gangs, despite warning signals from, among others, relatives.

• Police Hannah Bergelin's name collection is currently at police stations around the country.

Now she demands increased powers in the control of gang criminals.

• Another person is detained.

The person is suspected of grossly protecting a criminal.

• Policeman Andreas Danman, who was shot dead in Biskopsgården in June, was buried in Gothenburg.

Family and relatives are present at the church - 125 places are filled.

At the Swedish Exhibition Center, a large ceremony is taking place for the police and military, where the funeral will also be livestreamed for over 500 people present.

• The policeman who was murdered will be buried on Friday.

The funeral will also be livestreamed to a venue where hundreds of police gather.

This is out of consideration for relatives and corona restrictions.

• The prosecutor requested that the 17-year-old be remanded in custody, which the Gothenburg District Court agreed to.

At the first detention hearing the day after the arrest, the 17-year-old denied any wrongdoing, but was nevertheless detained and was also subject to restrictions.

• A motorcycle procession drove through Helsingborg to honor the police who were shot dead.

More than 1,000 people gathered to keep quiet for a minute.

• Residents in Biskopsgården walk towards violence.

Several hundred people gathered on Länsmanstorget in Hisingen and walked the six-kilometer stretch to Vågmästareplatsen.

• Hector Valeria has been training football with young people at Biskopsgården for over 15 years.

When he found out that a policeman had been shot dead on Wednesday night, he was shocked, but not surprised.

• The arrested 17-year-old who is suspected of the police murder in Biskopsgården is now requested to be detained.

He denies all suspicions against him.

• The shot dead policeman's former colleagues at P7 Revingehed remember him with warmth and start a collection in memory of the 33-year-old.

• According to the Police Association West, the everyday life of the police in the field is increasingly exposed.

• The case was handed over to the Public Prosecutor's Office and during the night, 20 people were detained.

Analysis responses were also received from the empty sleeves that were secured at the site.

At the same time, a surveillance camera can provide new clues in the hunt for the shooter.

• A 17-year-old is arrested on probable cause on suspicion of murder.

The police's theory is that the policeman was not the target at the shooting in Biskopsgården.

District Attorney Ulrika Åberg shares the assessment that the police officer was not the direct target.

• Many want to donate money to the police union's police damage foundation.

To date, approximately SEK 250,000 has been collected from private individuals.

• A person from Helsingborg is arrested for sharing a film from the police shooting in Gothenburg.

The clip shows the life-saving attempts on the shot police, reports P3 Nyheter.

• Several politicians in Gothenburg react strongly after a police officer was shot dead in Biskopsgården.

Leisure politician Saida Hussein (S) who lives in the area was shocked and said that the incident is the worst that has happened in the area.

- An attack on an individual police force is an attack on both our rule of law and our entire democratic open society.

• Several residents in Biskopsgården were saddened and upset that a policeman had been shot dead.

Witness Fredric was about to go to bed when he heard several bangs - and then a helicopter.

• A minute of silence was observed around the country, including in Malmö, Uppsala, Jönköping, Helsingborg and around Blekinge.

- The most likely thing now is that the shooting was not aimed at the police, he says.

• Empty sleeves that are believed to be connected to the fatal shooting were seized and sent for technical analysis.

Police were alerted to the scene at 10.30pm after several people heard gunshots in the area.

A policeman is said to have been shot while standing and talking to some people.