Olaf Scholz, the misunderstood favorite in the German general election

Olaf Scholz's SPD leads the polls one week before the German general election. What makes the current Minister of Finance and Vice-Chancellor the favorite to succeed Angela Merke ... 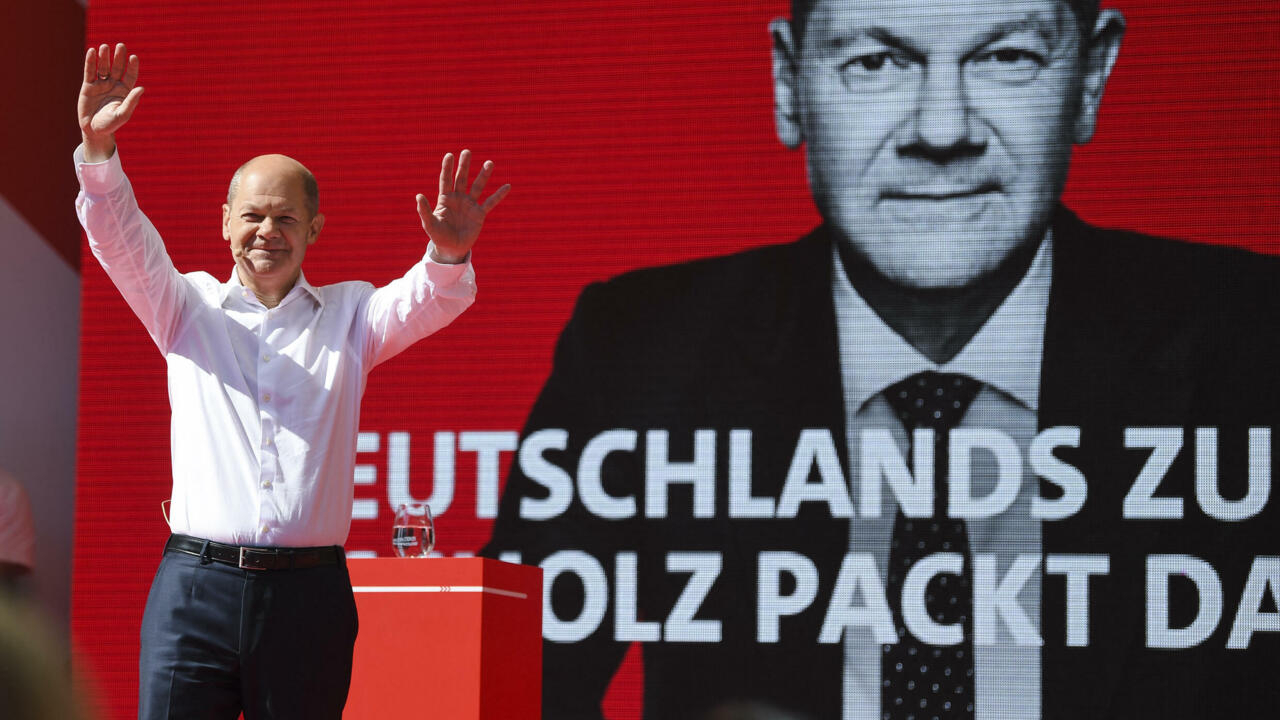 It is an electoral rise that is both completely unexpected and ultimately quite predictable.

Olaf Scholz, the SPD candidate - who is the favorite to succeed Angela Merkel one week before the German general elections on Sunday, September 26 - left largely the loser a few months ago.

In June again, the SPD was lagging behind, not only on the conservatives of the CDU (Christian Democrats) led by Angela Merkel, but also on the Greens.

It only took a summer for the curse of the Social Democratic Party, which has been in free fall in the polls since the beginning of the 2000s, to seem to come to an end.

And it took Olaf Scholz, current Minister of Finance and Vice-Chancellor of Angela Merkel and one of the executives historically least appreciated by the base of the SPD, who embodies this electoral rebound of the left.

Political commentators have been quick to blame Olaf Scholz's good fortune for the blunders of his main opponents.

Armin Laschet, the candidate of the Christian Democratic Party (CDU), has indeed committed a major media misstep during the catastrophic floods in Germany in mid-July by appearing hilarious in a photo taken on the spot.

As for Annalena Baerbock, the champion of the Greens, she got her foot in a story of embellished CV and plagiarism in her latest book.

>> To read also on France 24: Germany: nothing is going any more on the right one month of the federal elections

Olaf Scholz, favorite by default then? How could it be otherwise with a candidate whom the Anglo-Saxon media almost in unison qualify as “the most boring politician in the world”. But Scholz's supposed lack of charisma is also pointed out in Germany where the SPD candidate has long been nicknamed “Scholzomat”, a contraction between the candidate's name and “automat”, for his mania for responding like a robot to Questions. “He is the archetypal politician who thinks well, but communicates poorly,” summarizes the weekly Der Spiegel.

The SPD also seems to have reluctantly opted for Olaf Scholz.

The current Minister of Finance had wanted to take the head of the party at the end of 2019, but the base had preferred two representatives of the left wing of the SPD, again lambasting Scholz for what left activists have always criticized him for: being too much to the right.

Olaf Scholz is also nicknamed “the Merkel” on social networks and some media now call this sixty-something “Vati” (“dad”), in reference to “Mutti” (“mom”), the famous nickname of Angela Merkel .

But this parallel with the outgoing chancellor who, until yesterday, served as a scarecrow in the eyes of voters on the left, is starting to work in her favor.

At a time when the other candidates multiply the blunders, he appears as the reliable dolphin of the one who, for sixteen years, embodied German political stability and pragmatism.

The man of political remonstrances

He also knew how to use his position as Angela Merkel's finance minister to forge a reputation as a political leader capable of being up to crises.

This is how the Vice-Chancellor became the man of “whatever the cost” to the German to face the Covid-19 pandemic.

He also pledged to spend lavishly to compensate victims of the July floods.

In other words, Olaf Scholz is pulling off a political comeback (any reference to a former French Minister of the Economy would be fortuitous).

Another, say those who have followed his career closely.

He has, in fact, multiplied the improbable “comebacks”.

In 2001, he failed to get elected in Hamburg, the city where he grew up.

A year later, he bounced back to become secretary general of the SPD, during the era when Gerhard Schröder was chancellor, from 1999 to 2004. It was a resounding failure for this poor communicator who must, in particular, defend the very controversial reforms Schröder's labor market.

Scholz is definitely cataloged as a right-wing Social Democrat and the party urges him to resign at the end of 2004. “He was the first political victim of Gerhard Schröder's reforms,” Spiegel wrote in 2007. This year marks the return of 'Olaf Scholz, who becomes Minister of Labor in Angela Merkel's government of national unity. He is trying to restore his social-democratic image by criticizing the social policy of the Chancellor and by campaigning, without success, for the establishment of a minimum wage.

In 2011, he finally won the mayoralty of Hamburg and took care of local politics until Angela Merkel called him back to become his finance minister and vice-chancellor in 2018. In this post, he was no exception. comparison with his predecessor - the much feared Wolfgang Schauble, who had forged a reputation as the guardian of the temple of European budgetary orthodoxy. Olaf Scholz decides to take this credo on his own, to the chagrin of Germany's European partners who quickly nicknamed him “Wolfgang Scholz”.

What convince the left wing of the SPD that it is out of the question to hand over the keys of the party to this “social traitor” in 2019. A year and a half before making them their candidate for the post of chancellor.

But in the meantime, Olaf Scholz has not only been able to rise to the economic challenges linked to the health crisis, but he “has also taken care of his communication and appeared more friendly and open”, underlines Deutsche Welle.

He also let his youthful “mistakes” come to the media surface when he was part of the socialist youth.

He was then one of the most fervent detractors of the general secretary of this movement, Willi Piecyk, whom he criticized "for not being sufficiently anti-capitalist", tells the business daily Handelsblatt.

One way of trying to correct his image as a “false” Social Democrat a little?

Not sure that this is enough, especially if, on the evening of September 26, the SPD did indeed come out on top but was obliged to unite with the radical left party Die Linke to form a government coalition.

This scenario, discussed very seriously in the German media, would not be favored by Olaf Scholz who has officially declared that he prefers to govern with the Greens, without Die Linke.