Minister of Education on the budget: "A real investment in the school"

Of the SEK 74 billion in the government's autumn budget, one billion goes to schools. - A real investment, thinks Minister of Education Anna Ekström (S) who presented the budget at Stora Sätraskolan in Gävle. - It is not enough, thinks Peter Stjerndorff (M), 2nd vice chairman of the education committee in Gävle. 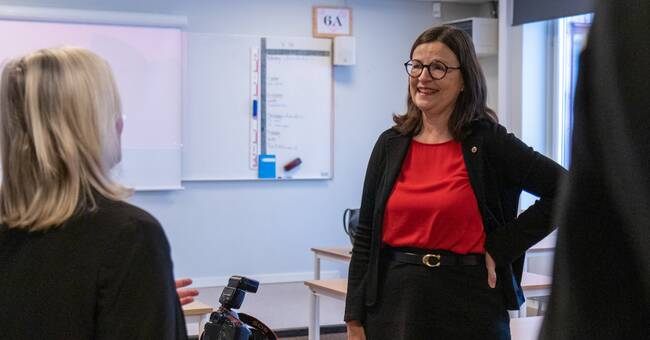 Minister of Education Anna Elström chose to present the government's budget proposal in Gävle and told, among other things, about the school billion that will provide more staff to the schools, more further education for teachers and higher education eligibility in upper secondary school vocational programs.

Lost during the pandemic

The school billion also includes money for knowledge investments for students who have lost hours of education due to the pandemic.

With an equivalence grant, special efforts will be made to help students in year nine to gain eligibility for upper secondary school.

- In addition to the new school billion in this budget, large sums go to municipalities and regions.

And the municipalities have a responsibility to make more money go to school.

So I assume that the school will receive a resource supplement from the general government grants, she says.

Municipal councilor Åsa Wiklund Lång (S) understands that the municipality will need to invest more in the school, but that the money is not enough for all the big holes that must be filled.

- But this is a good step on the road, she says.

But the Moderates in Gävle do not think that the government's school investment is enough.

- No, this is not enough, says Peter Stjerndorff, 2nd vice chairman of the education committee in Gävle.

All students who do not pass primary school get huge problems because high school is necessary today.

Those who do not pass school do not get a job.

How will we be able to pay for it in the future?

See the Minister of Education visit Stora Sätraskolan in Gävle.