Mid-Autumn Festival is approaching overseas with a strong festive flavor!

China Overseas Chinese Network, September 20th, title: Mid-Autumn Festival is approaching overseas with a strong festive flavor!   "Every holiday season, I think about family." In traditional holidays, overseas Chinese and Chinese people will always manage the festive atmosphere, pay attention to the festival ceremonies, and look forward to reunion and homesickness. The Mid-Autumn Festival is a 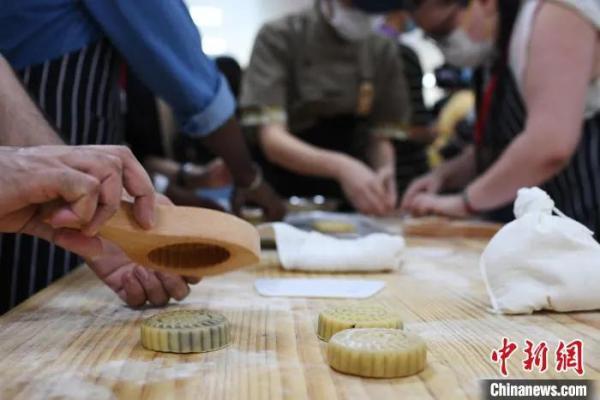 "Every holiday season, I think about family." In traditional holidays, overseas Chinese and Chinese people will always manage the festive atmosphere, pay attention to the festival ceremonies, and look forward to reunion and homesickness.

The Mid-Autumn Festival is approaching, and many parts of the world are beginning to be filled with a strong festive atmosphere.

For the Chinese, eating mooncakes is indispensable during the Mid-Autumn Festival.

According to the US "World Journal" report, the Mid-Autumn Festival is approaching. Chinese supermarkets in New York are already selling mooncakes everywhere. The inflation caused by the epidemic has caused mooncakes to be sold at a higher price than before, but the enthusiasm of the Chinese people to buy them is still high.

Every Mid-Autumn Festival is a day for Chinese people to reunite. Many families also have the tradition of enjoying the moon and eating moon cakes, or giving each other moon cakes to pass on blessings. The most conspicuous shelves of supermarkets have begun to put a dazzling array of moon cakes.

The New World Supermarket on 18th Avenue in Brooklyn has been selling very hot mooncakes recently. When Ms. Lin went to the supermarket to shop on the 6th, she bought three boxes of mooncakes.

She said that one of the boxes is mainly for her family to taste, especially to let her children born in the United States understand the traditional Chinese culture, and the other two boxes are planned to be given to friends.

Ms. Mai, who lives in Sheepshead Bay, has been busy ordering mooncakes these days.

She pointed out that her friends work in other places and there are not many local Chinese. It is very difficult to buy moon cakes and the items are not as good as in New York. Therefore, she entrusted her to buy 20 boxes of moon cakes and distribute them as holiday gifts.

Manhattan Chinatown Baoronghang began to put mooncakes on the shelves for sale in mid-July this year.

Due to the sharp increase in the purchase price of ocean freight containers this year, the price of moon cakes has soared.

However, on the 15th, employees of the store said that the mooncakes of well-known brands such as Maxim, Ronghua and Qihua were all sold out.

In addition, the classic Mid-Autumn Street Festival in San Francisco Chinatown will return this year.

On September 11th and 12th, the historic streets of Chinatown once again transformed into a lively and colorful pedestrian market.

At the street fair, there were not only traditional folk music performances such as the flute and the erhu, but also the actors who played Chang'e and Houyi in the mythical story "Chang'e Flies to the Moon".

A doll in the image of the panda, a national treasure of China, also walked around the scene.

Major food suppliers are providing various moon cakes, exotic snacks and other unique foods for the people to taste.

At the event site, tourists came here especially to see multi-ethnic families and young students, while the elderly were assisted by their families to celebrate the Mid-Autumn Festival.

On the eve of the Mid-Autumn Festival, a reporter visited a long-established bakery in Bangkok’s Chinatown.

As the festive season approaches, more Chinese are buying mooncakes.

According to reports, it is the most famous Chaoshan bakery in Thailand. It has a history of more than 80 years and has been passed down to the fifth generation of the family. Local Chinese families like to buy cakes there during festivals, weddings and funerals.

"We are of Thai Chinese descent. We will be worshipping our ancestors at home during the Mid-Autumn Festival. Generally, we will buy 10 moon cakes. This year we bought a little less than in previous years. The economy is not very good under the epidemic, but there will still be ceremonies at home. We must worship our ancestors."

Except that the filling recipe will be adjusted according to people's tastes, everything in this bakery follows the tradition.

The shop owner Shengchai told reporters that the best-selling mooncakes with durian filling during the Mid-Autumn Festival are the favorite flavors of Thais.

The epidemic has repeated itself. The business of the bakery is much lighter than before the epidemic, but the owner said that even if it is difficult, the price of mooncakes has not increased, because every household must have a festive atmosphere during the Mid-Autumn Festival. Sense of ritual.

In order to compensate for the impact of the epidemic on sales, the bakery opened social media accounts and increased online sales promotion efforts.

This year, the store has launched new flavors of mooncakes since the beginning of September, and they have been welcomed by young customers.

This year's Mid-Autumn Festival Cultural Week will last for one month.

Starting from September 11, the Kuala Lumpur Chinese Cultural Center will host 4 online seminars and workshops with the theme of Mid-Autumn Festival for two consecutive weekends, and registration is open to the public for free.

On the evening of September 18th, the center will also invite outstanding local young performers in Malaysia to bring the audience a live concert of the Mid-Autumn Festival "I hope people will last forever" where traditional folk music and modern electronic music are blended together.

The cultural lecture introduced the origin, meaning, customs, moon cake making, "Hou Yi shooting the sun", "Chang'e flying to the moon" and other myths and legends of the Mid-Autumn Festival through exquisite pictures and videos, as well as the characteristics of Malaysian Chinese who admire the moon, eat moon cakes, and carry lantern parades. custom.

The lecture also arranged a knowledge test on the Mid-Autumn Festival.

After the cultural lecture, a paper-cutting art workshop was held.

In addition to the above-mentioned colorful festivals, the overseas Chinese also use art to express their feelings and send their thoughts.

During the "Mid-Autumn Festival", the epidemic in Sydney was severe and everyone shut down the city and stayed at home.

The colleagues of the Sydney Huaxing Art Troupe each took a group of short life videos about the "Mid-Autumn Festival". In the form of art, they edited and compiled the "Missing by Candlelight" video evening to send blessings from afar.