Faced with the thousands of migrants who are now stranded at the border between Texas and Mexico, the Biden administration has decided to act: American migration services are increasing drastically ... 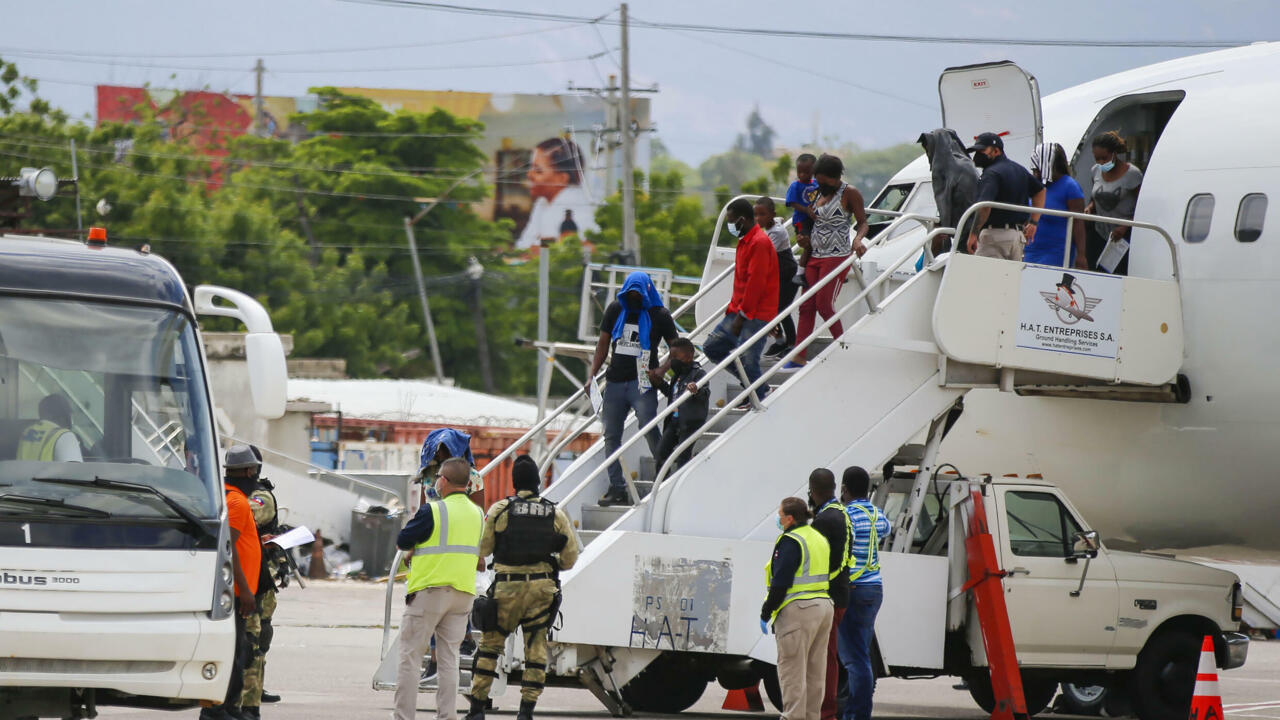 Faced with the thousands of migrants who are now stranded at the border between Texas and Mexico, the Biden administration has decided to act: the American migration services are drastically increasing deportations to the countries of origin of these migrants, with Haiti in the lead .

In Texas, the flow of migrants entering the Del Rio camp has dried up.

News of the resumption of evictions spread quickly.

The 15,000 migrants who were under the bridge

can always retrace their steps, but if they show up to US border guards in the camp to seek asylum, they risk deportation.

In Del Rio, those who came to their aid cannot help but notice their helplessness. Like Santiago. This thirty-something is one of the volunteers of the Del Rio humanitarian border coalition (“Del Rio humanitarian border coalition”) which helps migrants. He is unloading packs of bottled water. In the organization's hangar, there are also hygiene kits, diapers, second hand or small bikes for children,

. For over a week, they had been overwhelmed. Hundreds of migrants passed by every day. But this weekend, nothing, no one. "

We don't really know why they don't send us any.

Normally they have to come to this center before they can leave the city,

Arrived from Mexico in the small town of Texas, crossing the Rio Grande River, these migrants were massed under a bridge.

From less than 2,000 at the start of the week, they were more than 14,800 on Saturday, according to figures from the mayor of this border town, Bruno Lozano.

Spectacular images that prompted the American authorities to take the problem head on.

Nearly 15,000 migrants had found refuge under a bridge on the US-Mexico border in Del Rio.

After the unloading of a truck full of food, the center closed, because now the authorities of the city, Texas and the United States have decided to manage everything on their own.

We know that many want to help, but we ask you not to bring any more food unless we ask you to.

We don't want to waste any food that perishes very quickly in our hot weather, so wait for the border guards to contact you

Several thousand have already been transported to other border posts in Texas where their cases must be processed and deportations have accelerated, especially to Haiti.

Nationals from this poor and unstable country still form a minority of arrivals to the United States, but their numbers have been increasing for several months.

In addition to the political unrest and growing insecurity that already affected Haiti, on August 14, a deadly earthquake devastated the southwest of the country, killing more than 2,200 inhabitants.

So many reasons that had pushed the Biden administration to issue a moratorium and to suspend the expulsions of Haitian migrants in an irregular situation, for a period announced as indefinite,

recalls our correspondent in Port-au-Prince,

. A moratorium which will therefore have held a month to the day, because as of Wednesday, the American migration services returned a little more than 80 people to Port-au-Prince.

Sunday, it is a completely different rhythm that the United States imposed on the Haitian authorities: three flights left Texas and brought back more than 320 people on the tarmac of the capital.

Almost half of the passengers are under 5 years old, children most often born in Chile, but deported with their parents who had emigrated to South America from 2016. Babies in their arms, these young people in their thirties had left their country unable to find work.

Today, it is with anguish that they are preparing to reinvent a daily life in Haiti.

This is the case of this young Haitian paralyzed at the idea of ​​leaving the walls of the airport of the capital.

Imagine: some guys walked into the president's house and killed him.

», Testifies the one who prefers to be called Jeanne to keep her anonymity.

At first, I left the country because I couldn't find a job.

So today that I am sent back here, I have no chance of finding any because the country has become worse,

She had lived in Chile since 2016, but believed that she could live better in the United States, so in July, she, her husband and their 3-year-old son began the perilous journey through Central America.

If I had known how this trip was, I never would have done it. Seeing the conditions, I really regretted leaving because I was living well in Chile, I had my business, my husband was working. This is what allowed us to have the money to go to Mexico. From Chile to Mexico, it cost between $ 7,000 and $ 8,000. From Mexico to the United States, we spent over $ 3,000. And now we're here, arms dangling with nothing,

Three new planes of irregular migrants are due to take off on Monday and the flights will follow one another at this rate at least for the whole week.

And the arrival of these hundreds of people is yet another problem for the country.

Guiseppe Loprette, the director in Haiti of the International Organization for Migration (IOM), is very worried, while the country has experienced in quick succession the assassination of its president Jovenel Moïse and a devastating earthquake.

The clear message is that Haiti is not ready to receive more migrants who are already returning in difficult situation in a country which has many problems at the moment.